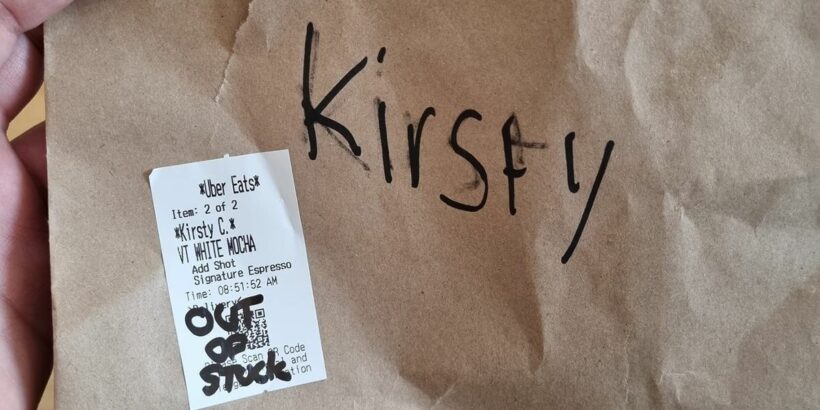 An "extremely tired" couple were left baffled after claiming that Starbucks left an empty bag on their doorstep with a 'no stock' sticker slapped on the front.

The parents, who wish to stay anonymous, said they were pining on getting their daily fix of coffee after they were up all night looking after their "poorly" baby.

After waking up and realising they had no beans left in their coffee machine, they took to Uber Eats to request a contactless order from Starbucks Reigate on Saturday (February 26).

But instead of receiving the White Chocolate Mocha (£6.10) and Cappuccino (£4.80) they ordered, they say they were delivered just a paper bag instead.

After reportedly receiving the empty order, the man shared their drama on Facebook in complete disbelief.

He wrote: "Starbucks what the hell is this?

"Order x2 coffees on Uber Eats, and get a paper bag saying out of stock…. Why not call us and ask if there is something else we want? What an absolute joke."

Speaking to the Daily Star, the man said they spent a whopping £22 on their order once service charge and delivery was added on top, but claims they only received a £6.10 credit note to use on the Uber Eats app.

After he realised his order was empty, he commented: "I said what the f***k.

"We ordered the coffee because our five-month-old son was poorly and we were both extremely tired.

"[We] went to make a coffee on our machine and we was out of beans so [ with ] no sleep we were both needing a coffee to get us through the day.

"Me and my fiancée had our first date at Starbucks as well so it's our go-to coffee shop!"

The dad added: "I was also up all night watching the news about Russia invading Ukraine as my friend Viktor returned to Ukraine to fight for his country.

"I'm extremely proud because if I didn't have a son I would be joining the thousands of people helping to cross the border from Ukraine to Poland like the people on TikTok."

In response to his Facebook post, one user said: "Can't believe they actually paid someone to deliver an empty bag. What a shower of s***"

While another person commented: "A coffee shop, that ran out of coffee? You couldn't make it up."

A third person said: "You sure the driver didn’t drink it and then write out of stock?!"

But the father believes Starbucks were out of syrup after a woman, claiming to be a previous employee, said they had no syrups under his post.

He says that he has tried to contact Starbucks through social media numerous times after he reportedly had no luck on getting through to an actual adviser on the Uber Eats app.

"We had to ask for a robot response refund," he added.

"I don't blame Uber I blame Starbucks as they could of [sic] done more to help us with another set of drinks."

The delivery company said according to their data, the couple only informed them that the White Chocolate Mocha was missing, however, the couple have denied that this was the case and said nothing but a paper bag arrived on their door step.

A spokesperson for Uber Eats said: "We are sorry that Kirsty had this issue with her order. When we were made aware of the missing item we provided a refund straight away.

"We would encourage any user who has a problem with an order to reach out to us via the Help section in the app."