The future Hall of Fame quarterback will reportedly retire from the NFL, according to ESPN's Jeff Darlington and Adam Schefter.

Tom Brady is retiring from football after 22 extraordinary seasons, multiple sources tell @JeffDarlington and me.

He is a three-time league MVP, five-time Super Bowl MVP, two-time NFL Offensive Player of the Year, a three-time All-Pro and a 15-time Pro Bowl selection, among other honors. His name is all over the NFL record book. He ranks first in regular-season career yards passing (84,520), passes attempted (11,317) and completed (7,263) and touchdowns (624).

All of those numbers are buoyed by a remarkable postseason career that has him the leader in Super Bowls won but also victories as a quarterback (35), passing touchdowns (86), passing yards (13,049) and so on. Many of those playoff marks, which Brady takes much pride in, are close to double the nearest competitor.

Brady’s career has been fueled by proving doubters wrong. At Serra High School in San Mateo, California, he was a backup on the freshman team and never attempted a pass, only to develop into a Division I prospect.

At the University of Michigan he arrived as the seventh-string QB. His first collegiate pass was intercepted and he considered transferring after his second season in Ann Arbor when he still saw limited playing time. Instead, head coach Lloyd Carr challenged Brady to stay and compete, telling Brady that leaving would be “something you’ll regret for the rest of your life.”

Brady stayed but still had to fight for playing time his final two seasons with Drew Henson, a talented local recruit who would later play in the NFL and MLB. Brady didn’t take over as the full-time starter until the second half of his senior year. It’s why, despite a successful senior season that included victories over Ohio State, Penn State and Alabama, NFL teams heading into the 2000 draft focused on his lack of athleticism and his struggles with the depth chart. 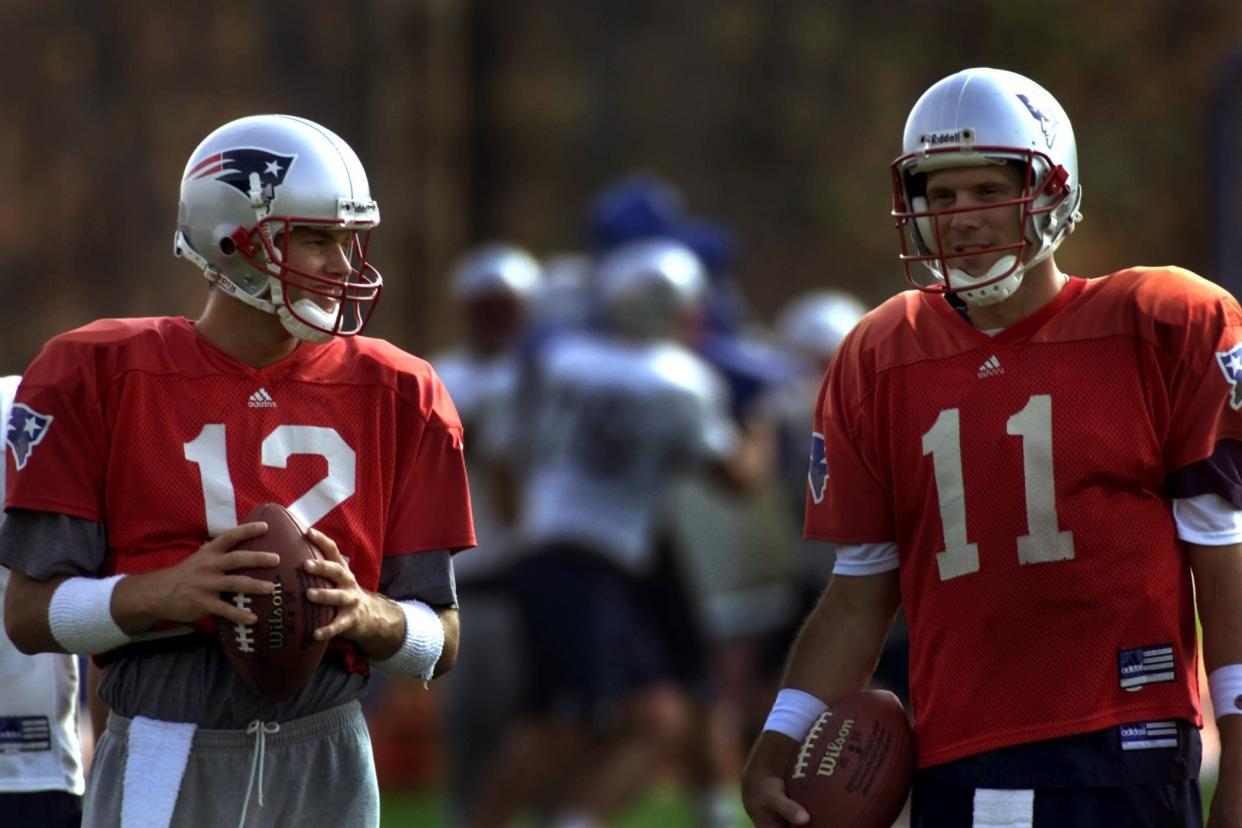 The New England Patriots had him pegged as a third-round talent, however, and when he was available in the sixth, at the 199th position, they jumped to select him despite already having three quarterbacks on the roster, including Drew Bledsoe.

Brady was undeterred. He’d overcome such challenges before and was motivated to prove that every team that passed on him was wrong. When he first met Patriots owner Robert Kraft at his rookie training camp, he boldly predicted that he was “the best decision your franchise ever made.”

By his second season, 2001, he’d climbed from fourth on the depth chart to take over an injured Bledsoe and lead New England to its first Super Bowl title, an upset of the heavily favored St. Louis Rams.

The Patriots would add two more Super Bowls in the next three seasons as Brady developed from a game manager of sorts to a potent force who, in 2007, set the then NFL record by throwing for 50 touchdowns and leading the Pats to a 16-0 regular season.

Brady teamed with head coach Bill Belichick to create a winning machine in New England. Together they delivered 17 seasons of 10 or more victories, 17 AFC East championships, nine AFC championships and six Vince Lombardi Trophies. During one stretch (2011-18) they reached at least the AFC title game.

Brady was perhaps best known for his ability to play his best in the game’s most desperate moments. He owns an NFL record 35 playoff victories and led his teams to 42 fourth-quarter comebacks and 53 game-winning drives. That includes, among other famous comebacks, leading a dramatic game-winning drive against St. Louis in his first Super Bowl. He later overcame a double-digit fourth quarter deficit to beat Seattle to win another Super Bowl and a 28-3 hole to Atlanta to win even another.

In 2020, after two decades in New England and facing fatigue with Belichick, Brady signed as a free agent with Tampa Bay. In his first season he led the Bucs to a Super Bowl title (his seventh) and answered any critics who thought he was just a product of Belichick’s "Patriot Way."

Last year, he led Tampa to a 13-win season and a trip to the NFC's divisional round, where the Bucs lost but not before Brady orchestrated a dramatic 27-3 comeback. Even in his mid-40s, he completed 67.5 percent of his passes for 5,316 yards, 43 touchdowns and just six interceptions.

At his reported retirement, he held the NFL’s Iron Man streak for quarterbacks, having not missed a game since 2016 and none by injury since 2009. (He was suspended in 2016 for four games for his role in the so-called “DeflateGate” scandal.

His intense health and anti-aging regime – dubbed the TB12 method – had by then become a side business.

In 2016, at age 40, he said he wanted to play until he was 45, which at the time was scoffed at as impossible. Brady, however, needed only to start next season to make that a reality. He certainly was physically and mentally capable of it.

After all those years and all those games though, the fire to compete had waned enough to step away.

The greatest quarterback that ever played will reportedly retire. 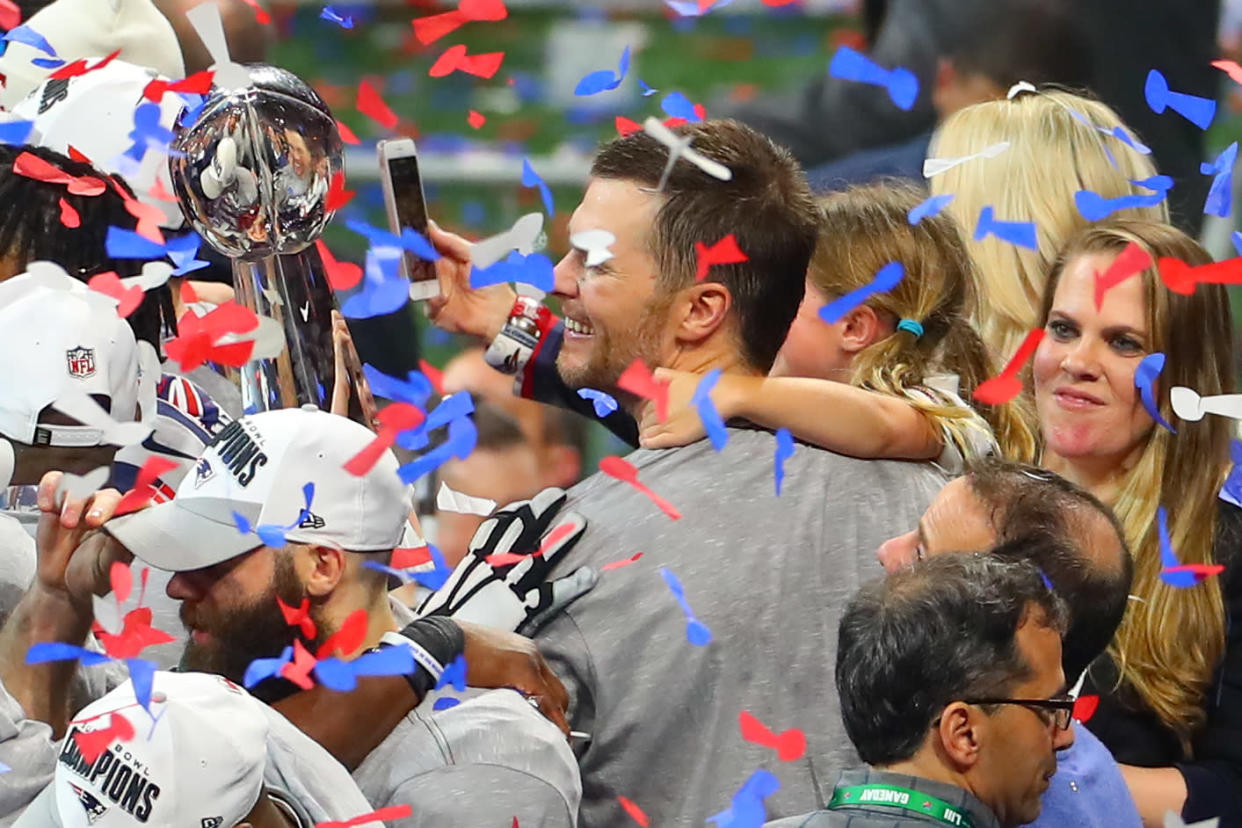