English Defence League founder Tommy Robinson has been formally released from bail after his case was sent to the Attorney General.

Robinson – real name Stephen Yaxley-Lennon – is waiting to hear whether he’ll face any more court action for filming people in a Huddersfield grooming trial in Leeds and broadcasting the footage on social media.

The activist was sent to prison for endangering the trial, but later freed when appeal judges found the way his case was handled was ‘fundamentally flawed’.

The Attorney General, the government’s top legal officer, will now decide whether to bring a fresh case. 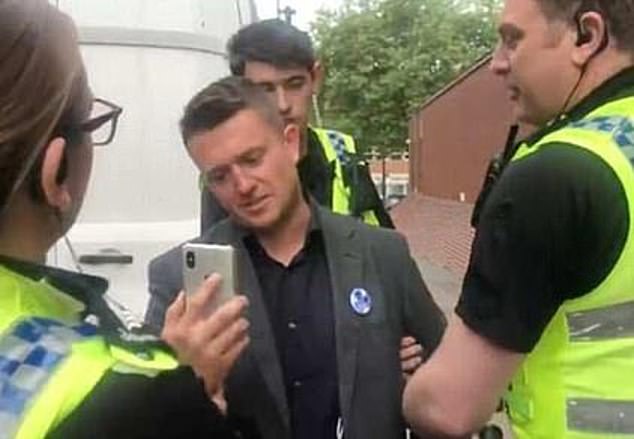 Tommy Robinson, pictured when he was arrested in Leeds, is waiting to find out whether he’ll face new court action for filming people involved in a grooming trial. He is no longer on bail

Robinson is hoping to head off on money-spinning trips to speak in the US and Australia after gaining notoriety abroad from the case.

He is waiting to see if US and Australian authorities will allow him to enter their countries.

At a short hearing this morning, Judge Nicholas Hilliard QC announced that Robinson is no longer subject to any bail conditions.

Robinson was freed from prison in August after three leading judges quashed a contempt of court finding made at Leeds Crown Court.

But he could be sent back to jail if he is again found in contempt for filming people involved in the trial.

The court heard that he denied breaching the Contempt of Court Act and making a broadcast likely to seriously prejudice the trial. 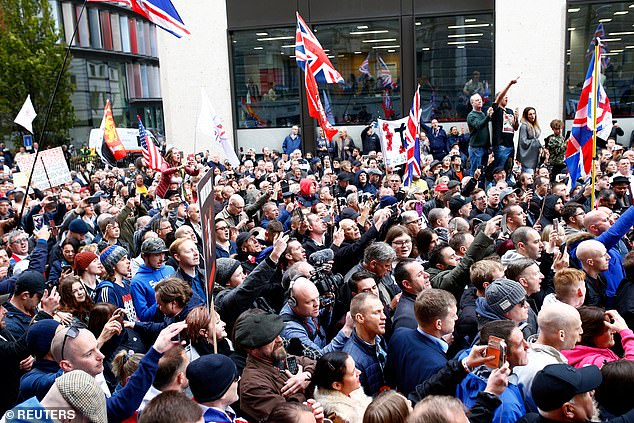 Judge Hilliard had referred the case to Attorney General Geoffrey Cox QC after receiving a document from Robinson last month.

He had said: ‘It is sufficient to say that the nature and extent of the controversies to be considered emerged to my eye more clearly than before.’

The Attorney General’s Office has said all the material was being looked at ‘afresh’ before a decision was made on whether to refer Robinson to the High Court for contempt.

Robinson has been invited to speak at meetings in Washington on November 14 by the US group The Middle East Forum.

He is meanwhile billed to appear alongside Gavin McInnes, the Canadian founder of the alt-right group Proud Boys, at a series of speeches in Australia in December.

The pair say they will appear in Adelaide, Perth, Melbourne, the Gold Coast and Sydney between December 5 and December 16.