The volcanic eruption in Tonga was the biggest explosion ever recorded by modern sensors.

It was so powerful, the force lifted cloud over Britain and generated small tsunamis in the Mediterranean Sea.

Waves from the volcano blast travelled around the globe four times.

A pair of research papers published in the journal Science have reviewed data and found the enormous eruption of the underwater volcano at Hunga Tonga-Hunga Ha’apai in January was far bigger than any 20th century volcanic event.

The papers also compared it to atom bomb tests conducted after World War II and found they were dwarfed by the sheer magnitude of the blast.

Only the Krakatoa eruption of 1883 – which is thought to have claimed more than 30,000 lives – rivalled the atmospheric disturbance produced.

“Tonga was a truly global event, just as Krakatoa was, but we’ve now got all these geophysical observation systems and they recorded something that was really unprecedented in the modern data,” Dr Robin Matoza, from the University of California, Santa Barbara, told BBC News. 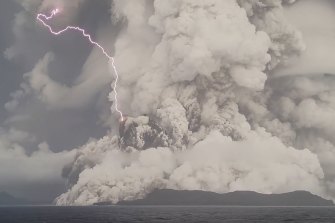 While Hunga Tonga-Hunga Ha’apai’s explosion, and subsequent ash cloud and tsunamis, were not nearly as catastrophic, its effects on those tens of thousands of kilometres away surprised even scientists.

The papers discuss at length a phenomenon called Lamb waves – essentially a form of a shock wave – named after the early 20th century mathematician Horace Lamb.

They are energetic waves in the air that travel at the speed of sound and are able to maintain their shape along a path guided by the surface of the planet.

Scientists found Lamb wave pulses produced by the Tonga eruption were seen to circle the Earth at least four times.

In Reading, England, more than 16,000 kilometres from Tonga, the pulses began arriving about 14 hours after Hunga Tonga-Hunga Ha’apai’s eruption and immediately lifted the clouds.

“At the time, we had a laser cloud-base recorder looking at the cloud base and as the wave went through the cloud was perturbed,” Prof Giles Harrison, an atmospheric physicist at the University of Reading and co-author on one of the papers, told the BBC.

“If ever you wanted evidence that the atmosphere is a remarkably interconnected thing, this was it. And what happens on one side of the planet can propagate around to the other side at the speed of sound.”

Where the Lamb waves coupled with ocean waves after the eruption, they generated tsunamis – not just in Tonga and New Zealand and other parts of the Pacific Ocean, but in the Atlantic Ocean and the Mediterranean Sea as well.

The audible shockwaves that were heard around New Zealand were also heard by people 10,000 kilometres away in Alaska.

A global network of detectors set up to monitor compliance with the Comprehensive Nuclear-Test-Ban Treaty picked up the infrasound signal, which indicated the blast produced an atmospheric pressure wave comparable with the biggest ever nuclear explosion – the Tsar bomb detonated by the Soviets in 1961 – but lasted four times longer.

New research is still to come on the cause of the tsunamis that struck Tongan islands in the immediate aftermath. Seafloor examination will determine how much, if anything, a collapse of part of the volcano contributed to them.