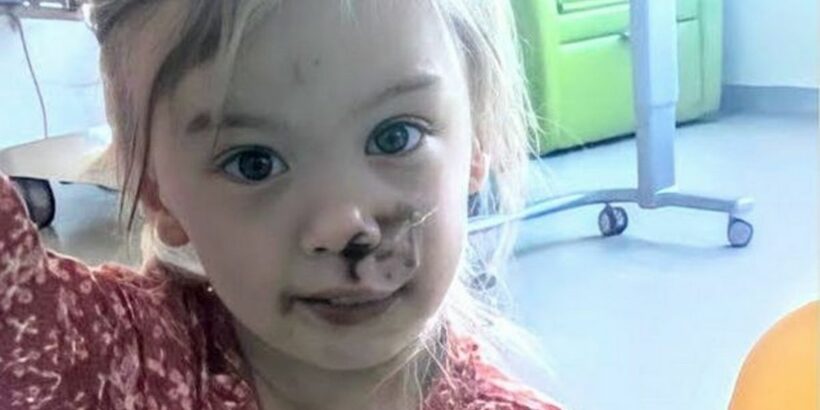 A dog tore a triangular chunk out of a two-year-old girl's mouth before her terrified mum could free her from its grip.

Lauren Clark has revealed how a horror "unprovoked" attack which lasted only a few seconds, will likely scar her daughter for a lifetime.

The mum was with little Michaela in their garden on Monday afternoon when her ex-partner's usually affectionate Staffie saw red and mauled the toddler.

Michaela was rushed to Derriford Hospital in Plymouth, Devon, where doctors stitched back her skin which was found on the floor in a pool of blood, PlymouthLive reports.

Lauren said that despite being stood within feet of her daughter and pulling the dog off Michaela as quickly as she could, she was still left with severe injuries to her face.

Later that same day Michaela had to have surgery on her face.

Lauren said she didn't want to ever put her daughter back in that situation, and so the pair have parted ways, and Lauren and Michaela are staying with Lauren's mum in the meantime.

"The dog we were living with was in the living room and me and my daughter were playing in the garden. She ran through the house, and I was running after her," Lauren said.

"All of a sudden he came out of the living room, pushed her over with his front two paws, used the paws to stand on her back, and as she turned her head around, he bit her face.

Lauren explained that she and Michaela had only moved into the house about two months ago, but that she and her ex-partner had been together for about a year at that point.

"The dog and her knew each other and they've always got along together and played fine. It was unprovoked, she didn't do anything to him.

"Shaken-up" Lauren said that she now sees the dog's "completely unprovoked" attack every time she closes her eyes.

Michaela sustained two lacerations to her cheek, had to have her lip stitched back together, and the cartilage in her nose was popped. Lauren said Michaela's doctors told her that her daughter is likely to be "scarred for life".

Lauren said: "There was a triangle missing our of her mouth which they've had to fully stitch back together. When my sister cleaned up the scene, she actually found my daughter's skin on the floor in the pool of blood.

"The cartilage on [Michaela's] nose was popped so badly that it now faces another way. I thought her nose was broken, but the doctors told me that babies don't have bones in their noses.

"Even now after surgery, she's been having constant nosebleeds, her nose is just full of blood."

Despite everything, Michaela is on the mend and is back to being her usual happy, smiley self, Lauren said.

Lauren added: "The police said that they didn't want to put the dog down because it was an isolated incident. But [it could happen to somebody else]."

"Thankfully my daughter has related the incident to that dog only, and she's been fine with my mum's dog. They've sort of kept their distance, but that's fine. But overall, it's not changed my opinion on dogs on the whole."