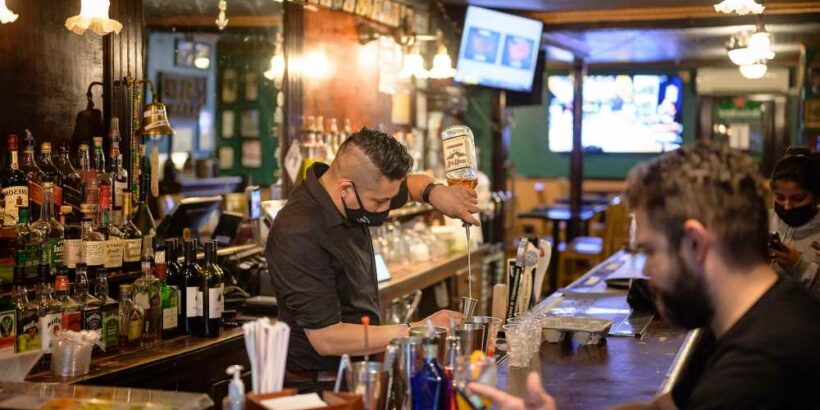 NYC will continue mask wearing in schools, after state says it’s only optional

The historic Neir’s Tavern in Queens wants to fully reopen, but it’s stuck at pandemic hours. COVID-19, however, is not the culprit this time.

Same with Havana Central in Manhattan and other eateries around the city.

Instead, a lack of staffing is to blame, and business owners are pointing fingers at bloated federal unemployment checks.

“Unemployment is for people who can’t find a job, correct?” Loycent Gordon, of Neir’s Tavern, asked The Post. “There’s a whole industry that’s dying for employees! … Have we gone crazy here?”

Under the latest federal stimulus plan, state unemployment checks are boosted by $300 per week until Labor Day. That’s on top of New York unemployment, which maxes out at $504 per week.

Gordon is on the hunt for a restaurant manager, shift manager and bartender, which would allow him to resume his pre-pandemic hours of about 11 a.m. to 2 a.m. Currently, he’s open from 2 to 11 p.m.

Neir’s, which has been in nearly continuous operation since 1829, claims to be the oldest bar in New York City. If you’ve seen “Goodfellas,” you’ve seen the bar on the silver screen.

“Although things are, we’ll call it, opening up, we still have COVID business hours. Not because of COVID rules, but because of labor shortage,” he said.

Loyden said the extra $300 weekly in unemployment benefits provided by the federal government is “of course” the cause of the service industry’s present hiring difficulties.

“Not saying it’s the only thing,” he added, noting that some workers went into other industries and some left New York state.

Before the pandemic, Gordon said he employed 10 or 12 people, but about six or seven fled the state since March 2020.

Even when he was able to set up interviews with prospective employees in the past few weeks, he’s had multiple no-shows. “We might start giving a free burger when you interview,” he said.

Jeremy Merrin, owner of Havana Central, a Cuban bar and restaurant with locations in Midtown, Garden City, and Edison, N.J., said his operation is “having incredible issues rehiring staff.”

His Times Square location needs about 12 more workers to “go to pre-COVID levels.”

For now, he’s opening later and closing earlier. He’s also had to close off sections of the large 46th Street space due to a lack of servers. And during peak periods, he’s had to stop taking lower-margin Uber Eats and DoorDash orders, due to a lack of cooks.

“Sales right now are still at 50 percent of pre-COVID levels,” he said. He’s hoping summer and the return of Broadway shows will juice his Times-Square top line.

Merrin, like Gordon, attributes the difficulty in hiring to former service-industry workers seeking jobs in other fields, the $300 unemployment boost, and a lack of immigrant workers.

“Our entire industry is driven by immigration,” said Merrin, who estimates 70 percent of his staff are immigrants. Illegal immigrants, while not technically eligible for regular unemployment insurance, can receive up to $15,600 from a $2.1 billion fund established by New York state.

“A lot of people want to be paid off the books,” in order to both net tax-free cash and draw unemployment, she said. “Obviously we can’t do that.”

O’Halloran said that while her veteran employees are loyal, she’s given up interviewing for new hires — at least until after Labor Day, when the pandemic unemployment supplement is set to expire.

“They probably think, ‘I’m getting paid decent and I can have the summer off,’” she said. “I’ve actually heard people getting paid better on unemployment than when they were working.”