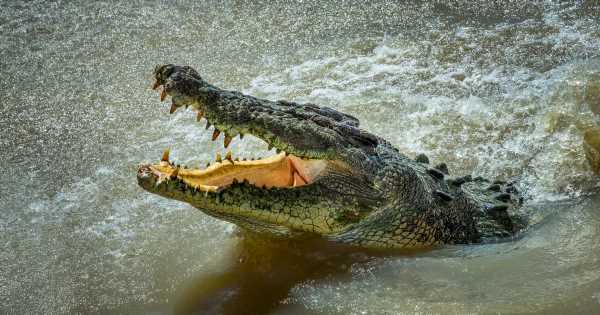 Two American tourists can consider themselves lucky to be alive after they were savaged by a saltwater crocodile at a Mexican beauty spot.

Daniel Kuzbiel and his friend Joshua Rotkvich had been staying at the plush Velas Vallarta hotel in Puerto Vallarta and decided to take a late night swim.

However, the pair were unaware the waters are home to enormous crocodiles and one took a liking to Kuzbiel.

READ MORE: Cops issue terrifying swimming rules after 6 people are attacked by sharks in a month

Rotkvich watched in horror from the shore as the beast mauled his friend before charging in to save him.

In the process, he was bitten in the arm and groin.

Kuzbiel meanwhile had suffered injuries to both of his lower extremities as well as his right upper extremity, chest and abdomen and lost two teeth from a head wound.

Both men remain in hospital with serious injuries following the terrifying attack and will undergo surgery.

She said: 'Daniel was in the water and Josh was on the beach. The crocodile attacked Daniel, pulling his foot, crushing his foot, trying to pull him under.

“Josh came running and starting punching him and kicking him.”

Doll claimed that after news of the pair’s accident has leaked out, the hotel where they stayed has attended to their every need.

She continued: “I have to say the management here has been wonderful. They've come to the hospital. They've been very supportive.

“The hotel management is being very, very helpful letting us stay here as long as necessary.”