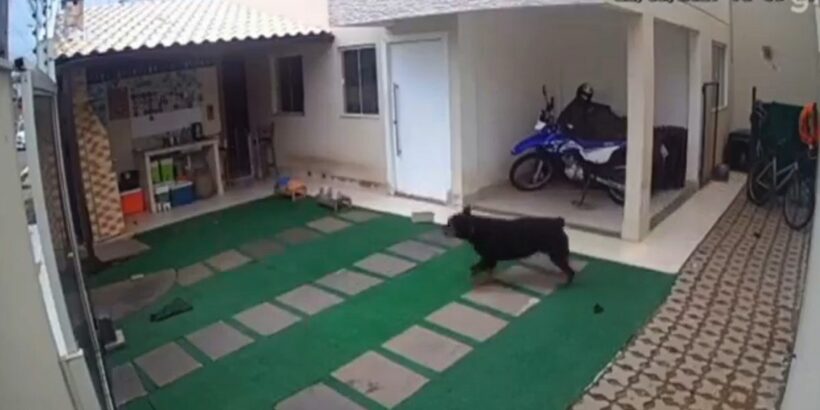 A horrifying video shows four dogs getting attacked by a swarm of bees that managed to kill two of the pooches with their stings.

In the clip, filmed in the garden of a home in Brazil on September 22, the four dogs are enjoying an afternoon nap when one of them flinches and whimpers.

Soon the other dogs are yelping and running around as the insects sting them over and over again.

As the swarm intensifies, the agitated bees are clearly visible flying in front of the CCTV.

The poor dogs desperately run around and try to get inside the house for shelter but the door is shut.

Unable to escape, the dogs eventually succumbed to the bee venom and two are said to have died.

The incident was filmed in the area of Praia do Morro in the coastal town of Guarapari in the south-eastern Brazilian state of Espirito Santo.

The dog's co-owner Thais Pacheco said she shared custody of the four pooches with her ex-boyfriend and it was in his garden where they were attacked by bees.

When the incident took place, the man was at work and was later told what had happened by neighbours.

Pacheco said her ex came home to find some of the dogs vomiting and others already passed out with signs of bleeding.

The biggest dog, a Rottweiler named Suzy, escaped from the property amid the chaos but sadly she did not survive.

She was later found dead on a street behind the house.

Another dog called Bob also died from the attack while the other two animals needed urgent veterinary treatment, with one canine still being kept under observation at the clinic.

It is not known why the bees suddenly swarmed the home, apparently unprovoked, and attacked the sleeping dogs.

The president of the Regional Council of Veterinary Medicine of Espirito Santo (CRMV), Virginia Hemerich, explained that the deaths of the dogs were probably caused by anaphylactic shock, adding: "A sting can cause a strong reaction.

"Multiple stings can lead to a generalised reaction because of the toxins released by the bees."