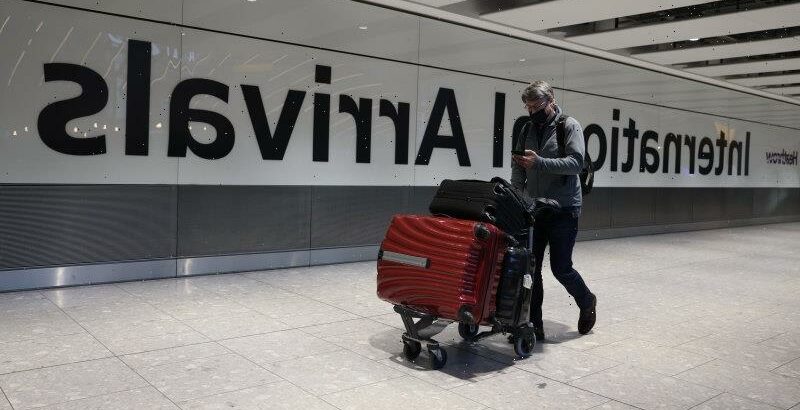 Washington: As governments scrambled to close their borders to southern African countries as a shield against a potentially dangerous new coronavirus variant, experts warned the travel bans may be too late – with confirmed and suspected cases cropping up as far away as Asia and Australia.

The variant, dubbed omicron, has a high number of mutations that could make it more easily transmissible. It was identified by scientists in South Africa, where early data suggest it is spreading more quickly than the now-dominant variant known as delta. Several countries, including the United States, have curbed flights from the region while epidemiologists work to identify how far the variant may have spread. 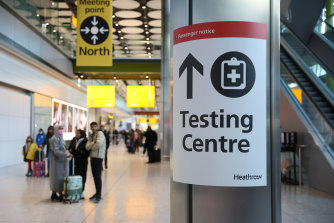 “By the time we have enough information to institute a travel ban, the cat’s already out of the bag, so to speak,” Nicole A. Errett, a professor at the University of Washington who has done research on public health emergency preparedness, said in an email.

“Omicron has already been detected in other continents. A travel ban could in theory buy some time by reducing the spread of new seed cases, but we are talking on the order of days to weeks,” she added.

Confirmed and suspected COVID-19 cases caused by the new variant have been detected in a growing number of regions, including Britain, Belgium, Botswana, Germany, Italy, Hong Kong, Israel and the Czech Republic.

Most of the cases outside Africa appear to involve people who had travelled to the continent.

Austria also joined the growing list of countries where the variant has been reported, detecting its first suspected case of the new variant in the Tirol region, Reuters reported Sunday, citing Austrian officials. 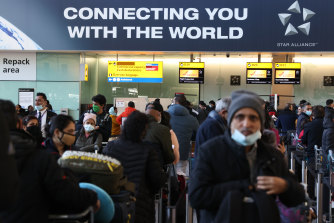 Travellers line up at Heathrow Terminal 2 in London, England. Credit:Getty

Authorities said in a statement that a traveller who returned from South Africa last week had tested positive for the coronavirus with indications of the new variant, though further sequencing will take place over the next few days to confirm the variant.

Earlier this month Austria became the first country in Europe to say it will mandate the coronavirus vaccine for everyone eligible and ordered a fourth national lockdown.

Two planes carrying some 600 passengers from South Africa landed in the Netherlands with 61 people infected with the coronavirus – including some cases believed to be the new omicron variant – Dutch health authorities said on Saturday.

Health officials on Sunday confirmed two fully vaccinated, asymptomatic passengers on a flight into Sydney tested positive for the new coronavirus variant and are now in government isolation. They were among 14 people from southern Africa who arrived on Saturday evening on a flight from Doha, Qatar, officials said.

All 260 people aboard the plane are considered close contacts and have been ordered to self-quarantine. Canberra announced a two-week travel ban on nine southern African countries.

“This clearly demonstrates the pandemic is not over,” Dominic Perrottet, the premier of New South Wales state, home to Sydney, told reporters on Sunday. “There are limits to what the state and federal government can do: These variants will get into the country. It is inevitable.”

The emergence of a new and potentially more menacing variant raises questions about what lessons officials have learned in the past two years, and whether they’re prepared for worrisome mutations that could evade current vaccines.

In Britain, the former head of the government’s vaccine task force accused leaders of ignoring a plan to prepare for the emergence of vaccine-resistant variants. Clive Dix, who chaired the vaccine task force until April, told the Guardian’s Observer that he wrote a “very specific proposal on what we should put in place right now for the emergence of any new virus that escaped the vaccine,” adding: “I haven’t seen a sign of any of those activities yet.”

On Sunday, Britain’s health secretary Sajid Javid said vaccines may be less effective against Omicron, admitting “we just don’t know enough” about the new variant to know for sure what the risk might be.

“There is reason to think that maybe, and I stress the word may, that this variant may turn out to make our vaccines less effective, it may not,” he told Sky News on Sunday as the government announced new measures to slow transmission of the virus.

From Tuesday, face masks will be compulsory in shops and on public transport in England.

Europe is in the grips of an increasingly deadly outbreak of the fast-spreading delta variant that has prompted officials in some countries to revert to measures such as lockdowns used to control the virus in the early days of the pandemic.

Singapore, which has been easing border restrictions, is watching the new omicron variant “very closely” and may be forced to roll back some easing measures, Prime Minister Lee Hsien Loong said in a speech Sunday, Bloomberg reported.

White House officials said that the world’s failure to contain the rapid spread of delta this spring demonstrated the need to be vigilant in staving off omicron, which public health experts fear could sicken vaccinated people and spread more rapidly than delta.

In designating omicron a “variant of concern,” the World Health Organisation said Friday that preliminary evidence suggests an increased risk of reinfection with this variant for people who have previously had the virus, compared with other variants. However, there are also high rates of people living with HIV and AIDS in southern Africa, which experts said makes it harder to interpret the effectiveness of either vaccine-induced or natural immunity against infection.

US officials said they quickly jumped into action after learning that the new variant contained long-feared mutations, such as the potential ability to evade vaccinations, and appeared to descend from a different genetic lineage than delta. Senior officials such as Fauci, Centres for Disease Control and Prevention Director Rochelle Walensky and others began discussions with government scientists, South African officials and vaccine manufacturers that intensified on Thanksgiving Day.

President Joe Biden and White House officials this weekend also urged unvaccinated Americans to get inoculated and called on eligible adults to get booster shots, saying that the vaccines remain the best protection against the virus.

Only about 24 percent of South Africans are fully vaccinated, according to Johns Hopkins University data, compared with nearly 60 percent of Americans.

“Every time the virus reproduces inside someone, there’s a chance of it mutating and a new variant emerging,” said Vinod Balasubramaniam, a virologist at Monash University in Malaysia. “The main way to stop variants is equal global vaccination. The emergence of omicron reminds us of how important that goal remains.”

The world’s major manufacturers of coronavirus vaccines, including Pfizer and BioNTech, Johnson & Johnson, Moderna and Chinese vaccine maker Sinovac said they are working to investigate the new strain of the virus and adapt their shots if needed.

Experts cautioned that the flurry of activity to fight omicron may turn out to be largely unnecessary, as researchers learn in the coming days whether current vaccines can ward off the variant or successfully limit symptoms.

“Not all COVID-19 variants cause trouble. For example, lambda and mu have not taken off globally. So it is possible that the new variant, omicron, could hopefully fizzle out,” said Sanjaya Senanayake, an infectious diseases expert at the Australian National University.