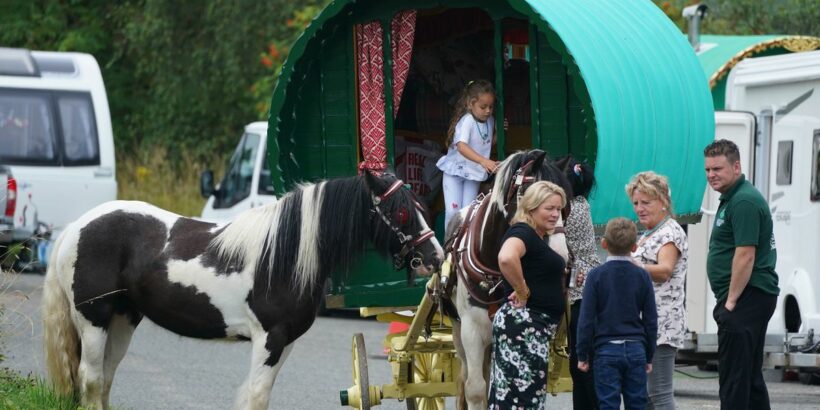 Travellers arriving for a horse fair clashed with locals after a farmer sprayed their camping spot with horse manure.

Members of the Gypsy, Roma and Travelling community began turning up in Kirkby Stephen, Cumbria, ahead of the 250-year-old Appleby Horse Fair.

But their arrival was met with a tense stand-off in a neighbouring market town, Teesside Live reports.

One of the established overnight camps was sprayed with cow manure and sectioned off with boulders.

Some travellers decided to set up camp at the nearby Upper Eden Rugby Club, prompting a confrontation with club management.

Locals claimed threats were made against them as travellers blocked the road during what has been described as a "stand-off".

They say police told them they could not close the gate to prevent more travellers coming through in case those already on site needed to leave in an emergency.

The travellers said they were being victimised.

Cumbria Police say no criminal offences were committed and on Tuesday the travellers moved on.

An unnamed rugby club member wrote on social media: "There was a large number of vehicles and caravans blocking the road.

"We requested that the travellers on the club car park be removed and sent on their way, the police informed us that this was a civil matter and they had no powers to move the travellers on.

"We were told that we would have to apply for a court order to remove the travellers."

The member added that the travellers offered money to remain on the site.

One local said it was a "frightening and intimidating situation".

But traveller Pauline Foster, who was part of the group, said they were "doing no harm" and the only reason they pitched up at the rugby club was because their regular spot was soiled with cow manure.

She said: "There were four or five police vans called and we warned we'd be kicked off double quick.

"They took pictures of all our caravans and vehicles and said if we didn't move we'd be charged and if we didn't pay it they'd follow us to Appleby to get it from us.

"We were doing no harm at all.

"The discrimination and harassment we suffer is getting worse and if this was any other race or culture there would be an outcry, but because it's our community people let it happen."

The Appleby Horse Fair, an annual gathering of travellers, normally attracts between 10,000 and 30,000 people each year.

It was cancelled last year due to the coronavirus pandemic.

A police spokesman said: "Yesterday an issue arose at the rugby club after a number of caravans were initially allowed onto the land.

"Subsequently, the police worked with the landowner and those who had set up on the land, which resulted in those people who had set up at the rugby club having moved away by Wednesday morning.

"No criminal offences were committed. No further action was required."