Comedian Trevor Noah has been accused of racism after he claimed Africa won the World Cup – because of the number of black players in the French national team.

The tournament closed in Moscow on Sunday with France taking home the trophy after beating Croatia 4-2.

But South African comedian Mr Noah said on his segment on The Daily Show, the victory was for Africa.

Of the 23-man squad, 16 have African roots of some sort, although captain Hugo Lloris, goalscorer Antoine Griezmann and striker Olivier Giroud are of European heritage.

Mr Noah then joked it was not France that won the competition in Russia.

He said on Monday: ‘Africa won the World Cup.

‘I get it, they have to say it’s the French team.

‘But look at those guys. You don’t get that tan by hanging out in the south of France, my friends.

‘Basically if you don’t understand, France is Africans’ backup team. Once Senegal and Nigeria got knocked out, that’s who we root for.’

The remarks on the US show caused international outrage when French football fans took to Twitter to blast Mr Noah.

French former reality TV star Martin Medus was among those who slammed the comments.

He said: ‘You’re a f****** racist. Those people are French and p***** to always be reminded of their background. They fight hard to tell people they are proud French people and yet you disrespect them calling them African. Are the Lakers an African team?’

Elise Frank added: ‘So basically, Trevor, all the African-Americans in the US are just Africans, right? Know that as a french of Algerian, German and Spanish descent, I find it insulting. We are all french, we are one people. Ask the players,they’ll tell you they’re proud frenchmen!’ 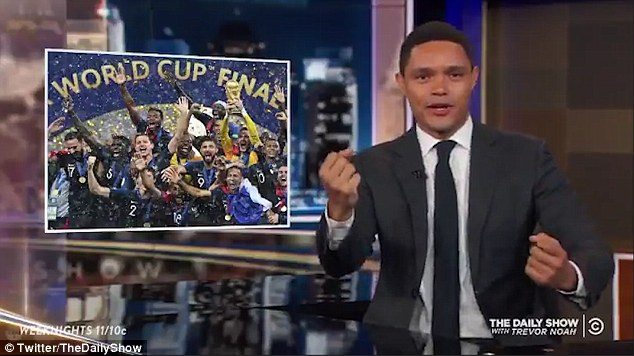 Race row: South African comedian Trevor Noah has been accused of racism over his comments on the nationality of the French football team

One man said: ‘This is so racist to think that because they are black they are not French. They claimed their love of France. You denied them the right to be French? Is this what you want to deliver to all afro americans also?

French players have already responded to reports they are African – insisting they are a French team.

Benjamin Mendy, who plays for Manchester City in the English Premier League, tweeted the names of the squad with a French flag next to each of them after sport page SPORF indicated where each player’s family originated. 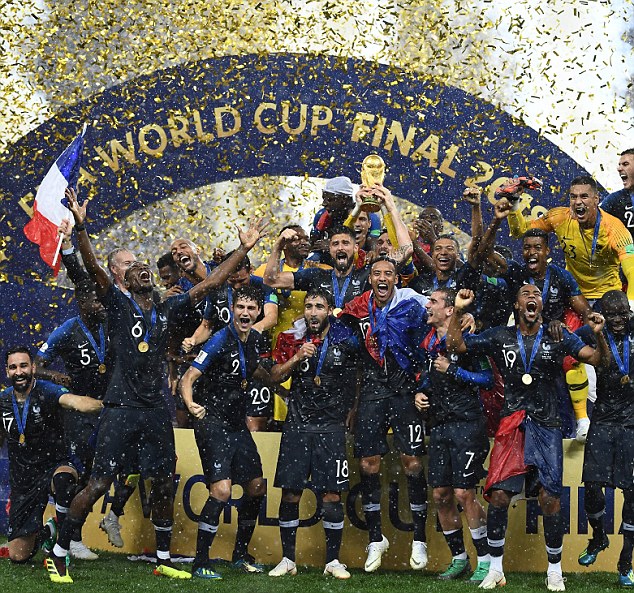 The World Cup win for France has been described as a ‘victory for immigration’ as the nation rallied around players of foreign descent.

Former US president Barack Obama was among those to point out the varied races of the team.

‘Just ask the French football team that just won the World Cup. … Not all of those folks looked like Gauls to me. But they’re French! They’re French,’ Obama said in Johannesburg.

Mr Noah’s comments were however shared by others around the world, because of the French players’ heritage.

Venezuela President Nicolas Maduro said: ‘The French team seems like the African team, in reality Africa won, the African immigrants who arrived in France,’ Maduro said at an event to celebrate police day in Venezuela on Monday.

‘How much have they despised Africa, and in the football World Cup France won the trophy thanks to African players or the sons of Africans.’ 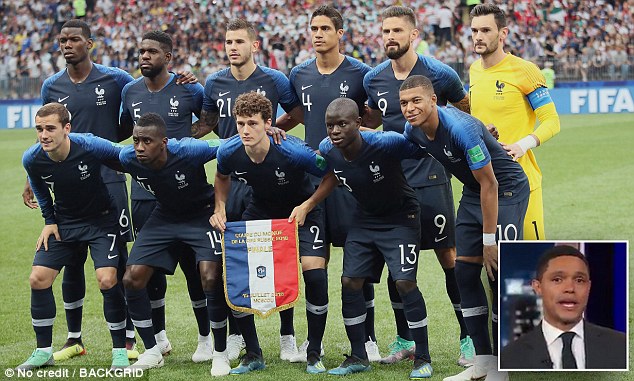 The French national team won the World Cup in Russia. Sixteen of the 23-strong squad have links to African nations

How many players in France’s national football team are of African descent? 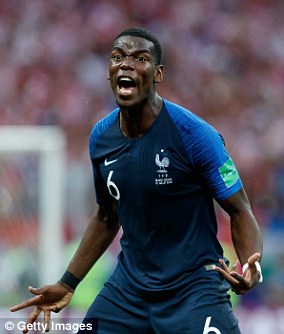 Paul Pogba is one of many French players with African roots

Kylian grew up in the Parisian suburb of Bondy with his family. His mother is Algerian and his father is Cameroonian.

His little brother Ethan, 12, is a member of the under-12 team at Paris Saint-Germain (PSG).

Umtiti was not born in France but moved to the nation from Cameroon aged two.

Umtiti was given the chance to play for Cameroon but it is reported he never saw it as an option – instead choosing to try and make the French squad.

Fekir was born in Lyon, France to Algerian parents. He once elected to represent the African nation but later changed his mind.

Fekir’s father – Mohamed has been vocal in the past about wanting his son to play for Algeria but Fekir opted to represent the nation of his birth.

Sidibé was born in Troyes, France, where he lived with his parents and three sisters. The family have roots in Mali.

Thauvin was born in Orléans, France. Thauvin was a regular in the junior national squad and represented them at the under-18, under-19, under-20 and under-21 levels.

Pavard was born in Maubeuge to French parents. He plays for VfB Stuttgart as a defender.

Kante’s parents came to France from Mali in 1980 and the footballer grew up in a small flat in the district of Rueil-Malmaison.

He famously turned up to training at JS Suresnes alone as a child – determined to play football.

Presnel Kimpembe was born in Beaumont-sur-Oise, France, to a Congolese father and a Haitian mother. His nationality is French Congolese.

The player has 43 appearances for Paris Saint German after joining the club’s junior squad aged ten.

Former Crystal Palace goalkeeper Steve Mandanda is nicknamed ‘Frenchie’ by his family after choosing to play for the national squad, rather the the Congolese team.

He was born in Kinshasa but moved to France aged two. He has three younger brothers, all of whom are goalkeepers, including Parfait, a Congolese international player.

Hernández was born in Marseille, France while his French father Jean-François played for Olympique de Marseille. The family moved to Spain when he was four.

The footballer now plays for a Spanish team himself, Atlético Madrid.

Blaise Matuidi was born in Toulouse, France to Angolan parents.

Matuidi’s parents fled Angola in the 1980s when the country’s civil war was raging. They arrived in the Democratic Republic of Congo soon afterwards, and from there headed to France. Matuidi grew up in a poor neighbourhood but was a talented player from a young age.

The footballer is said to have visited Angola many times.

The Filipino parents of Alphonse Areola were working in the French capital, Paris, when they had their son.

Areola has been part of France’s youth teams since 2008

Steven Nzonzi was born in Colombes, France. French-Congolese N’Zonzi had to decide in 2012 whether he would accept a call to play for The Democratic Republic of Congo and go onto the Africa Cup of Nations – or hold out to see if he would be called up for France.

He stuck with his birth nation and was eventually called up.

Antoine Griezmann was Mâcon to a Portuguese mother and a German father.

His father Alain, a town councillor, originated from Munster, Germany.

Ousmane Dembele was born in Vernon, France. His mother is of Senegalese and Mauritian descent while his father is from Mali.

When he joined Rennes at the age of 13, his mother siblings moved to Brittany with him.

Corentin Tolisso was born in Tarare in France. His father is from Togo qualifying him to play for the national team.

Tolisso had previously acknowledged his ties to Togo but was loyal to France, stating that ‘I was born here and grew up here.’

Thomas Lemar is from the French overseas territory of Guadeloupe in the southern Caribbean Sea. The family migrated to France while Lemar was young. 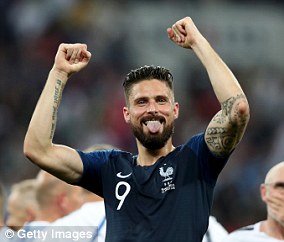 Giroud was born in Chambéry, France. He began his career at Grenoble in Ligue 2. Giroud is of Italian descent since both of his grandmothers are from the country.

Hugo Lloris was born in Nice. His father is of Catalan descent.

Adil Rami was born in Bastia, France. He debuted professionally for Frejus in 2003. Rami’s parents are Moroccan but live in Corsica.

Benjamin Mendy, the Manchester City player was born in Longjumeau France. Mendy first played for France as an under-16. His family is from Senegal.

Varane’s nationality is French Martinique. His father comes from the Caribbean island of Martinique while Varane was born in Lille, France.