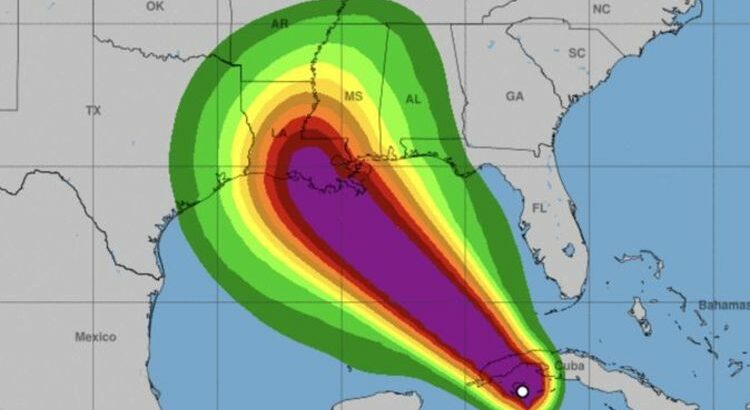 Hurricane season has churned out another storm in the US, with Ida forming in the Atlantic Ocean. The system is tracking northwest from the Gulf of Mexico and recently passed over the Cayman Islands. The National Oceanic and Atmospheric Administration (NOAA) has issued warnings as it wheels towards Cuba and eventually the coastal US.

According to the NOAA, Ida has made landfall as a hurricane on the Island of Youth, which sits off the western tip of Cuba.

The warnings cover the Isle of Youth and nearby provinces of Artemisa and Pinar Del Rio.

Ida will gradually wind towards the US, bringing more life-threatening conditions to coastal states such as Louisiana and Mississippi this weekend.

Once it reaches the Gulf coast, by Sunday, according to NOAA, it will have become a “dangerous major hurricane”.

Risks from hurricane-force winds will only increase, especially along the Louisiana coastline around New Orleans.

The storm will produce heavy rainfall across the central Gulf Coast, from Louisiana to Mississippi and Alabama and the Lower Mississippi Valley, with “considerable” flooding.

The NOAA has asked people to follow local rules as risks from inundation climb to severe levels in the US.

The warning reads: “The risk of life-threatening storm surge inundation is increasing along the coasts of Louisiana, Mississippi, and Alabama.

“Inundation of 7 to 11 feet above ground level is possible within the area from Morgan City, Louisiana, to Ocean Springs, Mississippi, including Lake Borgne.

“Interests in these areas should follow any advice given by local officials.”

The NOAA has released several warnings, watches and advisories for areas Ida will likely collide with this weekend.