Washington: In between snapping selfies with steelworkers for Canada Day on Sunday, Prime Minister Justin Trudeau came up against some uncomfortable questions.

At an event for steel and aluminum workers at Regina in South Canada, a reporter asked Trudeau, 46, to address allegations that he had groped a young woman at a music festival in British Columbia 18 years ago. 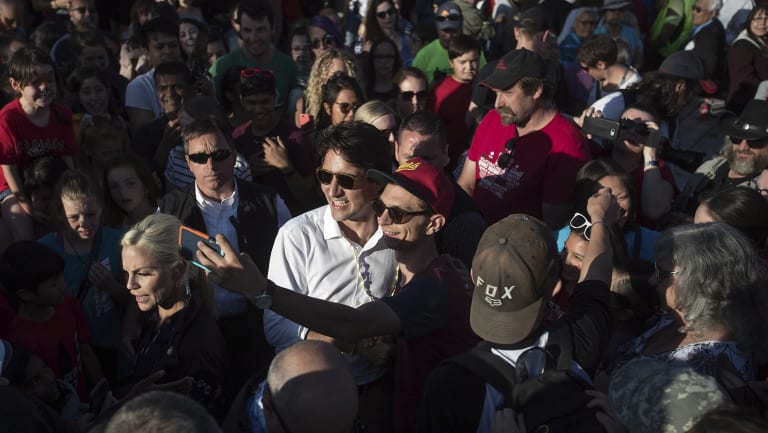 Canadian Prime Minister Justin Trudeau, centre in white, poses for a selfie with a man at a Canada Day barbecue event in Dawson City, Yukon.

The self-described feminist, who has said he has "no tolerance" for sexual harassment, said he did not recall the event.

"I remember that day in Creston well. It was an Avalanche Foundation event to support avalanche safety. I had a good day that day. I don't remember any negative interactions that day at all," he said, nodding and smiling to reporters.

The allegations first appeared in a community paper called the Creston Valley Advance in 2000. An unsigned editorial suggests that Trudeau, then a 28-year-old teacher, groped a young, female Advance reporter covering the Kokanee Summit Festival in Creston, British Columbia.

The annual festival was raising funds for the Avalanche Foundation, in which the Trudeau family became active after Michel Trudeau, the Prime Minister's brother, died in an avalanche in Kokanee, reported the National Post. The Creston editorial did not include details of the groping incident, but wrote that the reporter involved felt "blatantly disrespected",and that Trudeau allegedly apologised a day later for "inappropriately handling" her. Response to the editorial at the time was "muted", said a former publisher of the paper.

The name of the reporter involved remains unknown. According to the National Post, she is no longer in journalism.

The Advance's publisher at the time told the Canadian Broadcasting Corporation this week that she recalled talking to the reporter involved in the incident.

"My recollections of the conversation were that she came to me because she was unsettled by it," she said. "She wasn't sure how she should proceed with it because of course we're talking somebody who was known to the Canadian community."

The editor at the time, Brian Bell, also said to the CBC that he was sure that whatever allegedly happened "was definitely not welcome and definitely inappropriate". He added that the reporter involved "was of a high character", and that "there's no question in [Bell's] mind that what was alluded to, written about in that editorial, did happen."

These allegations against Trudeau recently resurfaced when popular political commentator and Trudeau critic Warren Kinsella tweeted a picture of the editorial June 6 with the hashtag #MeToo. His tweet was later picked up by various outlets, including Breitbart.

The resurgence of these allegations has plagued the image of the liberal leader known for his strong record on women's rights.

In 2014, as the leader of the Liberal Party, Trudeau suspended two male members of Parliament who were facing allegations of sexual harassment from other female MPs. Reports later emerged that Trudeau planned to permanently expel the two male MPs, but the men resigned from the party before an official announcement was made. More recently, in 2017, Trudeau's party proposed new legislation to tackle workplace harassment as allegations of sexual misconduct emerged against some of the country's leading politicians.

In discussions about sexual harassment, the Prime Minister has frequently referred to his time at McGill University, where he worked as one of the first male coordinators for the student society's sexual assault centre.

"I've been very, very careful all my life to be thoughtful, to be respectful of people's space and people's head space as well," he told CBC this year. "This is something that I'm not new to. I've been working on issues around sexual assault for over 25 years."

When the groping allegations were first revisited in early June, a spokesperson for Trudeau's office, Matt Pascuzzo, reiterated this message: "As the PM has said before, he has always been very careful to treat everyone with respect. He remembers being in Creston for the Avalanche Foundation, but doesn't think he had any negative interactions there."