Donald Trump asks for a ‘friendly reporter from Turkey’ at White House press conference – prompting ally Lindsey Graham to joke darkly: ‘There aren’t any others left’ in reference to Erdogan’s human rights records

A Turkish reporter started off her question to Donald Trump Wednesday by bashing Barack Obama and the president questioned whether the foreign journalist was actually employed by Turkey.

Trump requested his Turkish counterpart President Recep Tayyip Erdogan call on a ‘friendly reporter’ after he took the first question of the briefing from right-wing One America News Network – which covers his presidency favorably.

‘You can ask the president a question now. Same reporter – you sure you’re a reporter? You don’t work for Turkey with that question?’ Trump questioned after answering the Turkish reporter’s question in a joint press briefing with Erdogan.

Turkey has become known for its mistreatment, censorship and silencing of journalists – especially of those critical of the government. 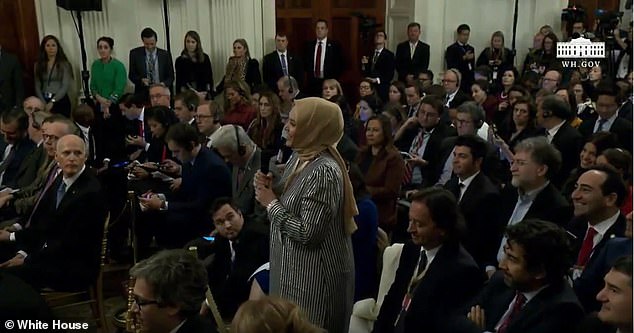 Donald Trump questioned if a Turkish reporter asking a question at Wednesday’s joint press briefing were actually a journalist after she bashed Barack Obama in her question. ‘You sure you’re a reporter? You don’t work for Turkey with that question?’ Trump asked from the podium 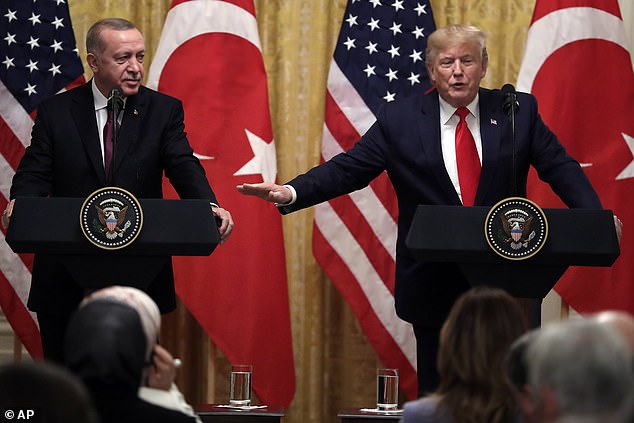 A head of calling on the Turkish journalist, Trump told his Turkish counterpart to only call on a ‘friendly reporter’ 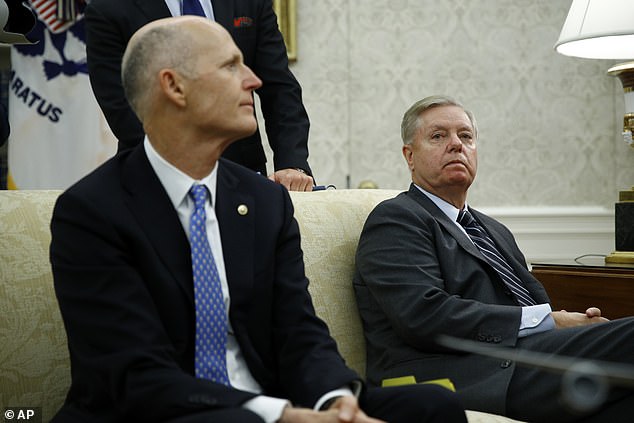 Republican Senator Lindsey Graham (right), who attended the Oval Office meeting (pictured) and press briefing with Erdogan, was overheard by reports in the joint briefing saying that there ‘aren’t’ any others left,’ in reference to there not being any reporters in Turkey who are ‘unfriendly’ to Turkish government

Last month, the Chief Prosecutor’s Office of Istanbul published a statement banning any news reports and comments that were critical of Turkey’s military assault on northern Syria.

‘[Person who] target the social peace of the Republic of Turkey, domestic peace, unity and security… [with] any kind of suggestive news, written or visual publication/broadcast’ will be prosecuted, the statement says. This includes any social media accounts.

Along with the initiative, Turkish forces detained two news editors for their reporting or comments on the situation.

The Directorate General of Security said at least 78 people are being prosecuted in relation to negative coverage or comment on Turkey’s invasion of Syria.

Trump and Erdogan held the briefing after an Oval Office meeting where they discussed expand trade and other issues – ranging from Syria policy to Turkey’s purchase of a Russian missile defense system.

After the meeting Trump lauded his relationship with the Turkish president, claiming they have been friends since the start of his presidency.

‘We’ve been friends for a long time, almost from Day 1. We understand each others’ country. We understand where we are coming from,’ Trump told Erdogan as they sat next to each other in the Oval Office.

‘They’re highly respected in their country and in the region,’ Trump said of Erdogan and his wife Emine. 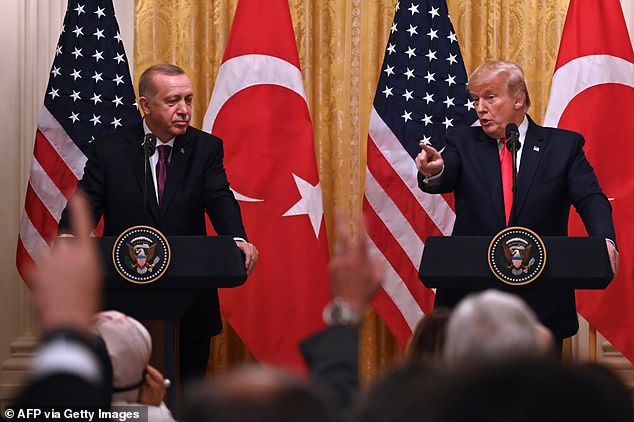 In the briefing, after Trump gave OANN two questions for him and one for Erdogan, and gave his second question to White House correspondent John Roberts of Fox News, another right-leaning media organization.

He told the Turkish president after answering OANN’s questions that it was his turn to call on a Turkish reporter.

‘Would you like to pick somebody?’ Trump said after giving the question from a OANN reporter. ‘A friendly person from Turkey, please. Friendly – only friendly reporters we like to see. There aren’t too many of them around.’

To that, Republican Senator Lindsey Graham, who was in attendance at the press briefing, was heard by several reporters saying, ‘There aren’t any others left’ – meaning that there are not more reporters critical of the Turkish government operating in Turkey.

Erdogan chose a female Turkish reporter, who started off her question to Trump by bashing his Democratic predecessor Barack Obama.

‘Thank you, Mr. President. You had the burden of Obama’s flawed foreign policy, and one of those flaws was aligning the U.S. with a U.S.-designated terrorist organization: the PKK, and a Syrian offshoot YPG. You’re trying to manage the damage it did to U.S.-Turkey relations,’ sh started.

‘However you also invited the ring-leader of YPG to the White House his codename Mazloum Abdi, and he is responsible for at least 18 terrorist attacks in Turkey which caused the death of 164 soldiers and 48 civilians. So, after today’s meeting, do you still think of inviting him to the White House, which would be very offensive and hurtful to the Turkish people?’

Mazloum Abdi os the the Kurdish commander-in-chief of the Syrian Democratic Forces, which fought alongside American troops against Islamic State insurgents in northeastern Syria.

Turkey is demanding the White House call off plans to meet with the leader they deem a terrorist.

Trump spoke with the SDF commander on the phone last month and afterward praised his ‘courage’ in a tweet.

‘I look forward to seeing you soon,’ he directed in his tweet to the Kurdish general.

Trump withdrew American troops from Syria at the start of last month, which paved the way for Turkey to invade U.S.-allied Kurdish forces in the region.

The move was widely criticized, even from some of his top aides and allies in Congress.