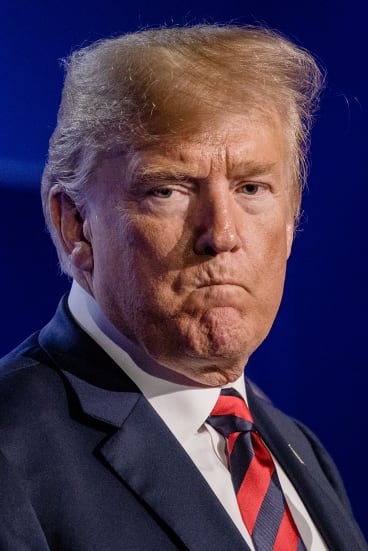 US President Donald Trump during a news conference at the NATO summit in Brussels.

London: Thursday afternoon a buzz went around the cavernous media hangar at NATO’s shiny new headquarters in the industrial outskirts of Brussels.

Hundreds of Journalists suddenly sprinted out of the building, heading for the nearby press conference tent, a dark zone focused on a bright stage.

On that stage were four US flags and a podium.

The room filled to capacity and beyond. Latecomers were barred.

This was not on the published program. We were supposed to be waiting for a dull, predictable closing address by Norwegian NATO chief Jens Stoltenberg, who would no doubt regurgitate the practiced lines about a strong alliance he had been producing all week at this 2018 NATO leaders summit.

Enter Donald Trump. He had ducked out of a meeting about NATO’s operations in Afghanistan, because he had something to say.

A Trump press conference is a rare and remarkable thing – he has not given one on US soil all year. It is a zone of blurred syntax, debatable claims and hypnotic power.

A place where some journalists cannot help but laugh at the absurdity or unlikelihood of what was just said, and others applaud what they think they just heard.

A place where even experienced hacks are hesitant when their turn comes to ask a question, as their drive to get new information fights their desire to debate what they were just told.

But let’s rewind a little. Here’s what the US president said at the NATO summit.

“All 28 NATO nations have pledged to increase their investments in defence and to move toward investing 2 per cent of their GDP in our collective security,” he said. “This commitment makes clear that NATO will not be complacent. Our alliance will reverse the decline in defence spending and rise to meet the challenges that we face in the 21st century.”

The president saying those words was Barack Obama. The summit was in 2014, in the grounds of a lush golf course near Cardiff, Wales.

The new pledge to increase defence spending after the post Cold War lull was prompted by sudden and worrying Russian aggression to NATO’s east. Russia had annexed Crimea and was linked to separatist fighting in Ukraine.

After years in which the only NATO projects were far from its borders, the defence pact realised it was rusty and unprepared in the still unlikely – but suddenly not unthinkable – event that Russia pushed further west.

Since then the threat has become ever clearer but Europe has mostly leaned on its allies for help, rather than bulking up its physical defences. There have been NATO war games, exercises and troop placements in the Balkans and other points east, and repositioning of troop bases and equipment stores. But defence budgets don’t turn on a dime, and Europe has had other things to worry about. 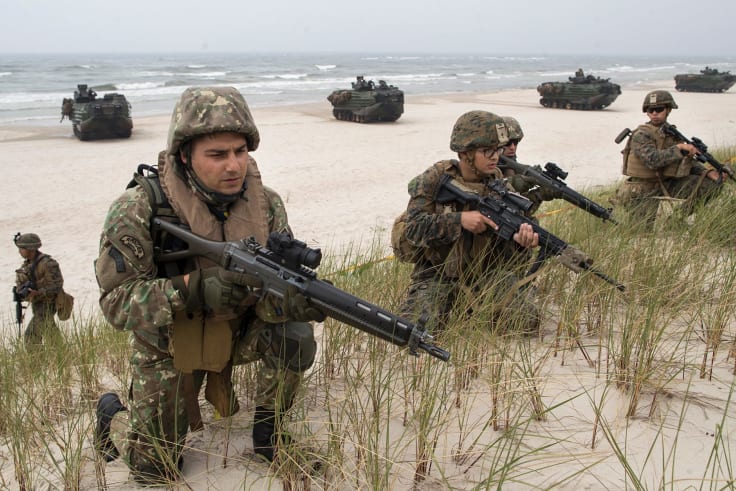 US Marines take a part in a NATO exercise, BALTOPS 2018, in Lithuania.

This year just five NATO countries will definitely hit the 2 per cent mark pledged in Cardiff, with another three expected to, according to Stoltenberg. Three NATO countries will spend less than half that amount on defence. A dozen or so more have revealed plans to meet the target by 2024.

The 2 per cent figure was always an arbitrary line. It could fluctuate not just with defence spending but with a country’s economy – in 2009 the US could briefly boast to be spending more than 5 per cent of its GDP on defence, because its economy tanked after the financial crisis. As the US recovered, so did the figure drop (now to 3.5 per cent, though Trump claimed it was more than 4 per cent).

For comparison, Australia plans to reach the 2 per cent mark in a few years’ time, thanks to a series of big new investments in military hardware.

In Brussels, Trump was not impressed – for a start, with Europe’s lagging defence spending, and then (in an abrupt and probably unscripted ambush) with the 2 per cent mark itself, which he said should be 4 per cent.

On Wednesday he (or someone on his team) approved the summit’s official declaration, in which the allies said they “reaffirm our unwavering commitment to all aspects of the defence investment pledge agreed at the 2014 Wales summit, and to submit credible national plans on its implementation”.

But the unmollified Trump was never really going to affirm an unwavering commitment to an Obama era plan. He continued the argument that night at an official dinner, then into Thursday morning, when he arrived half an hour late to the summit, but then insisted his fellow leaders debate the issue of defence burden sharing further – ignoring the summit’s schedule to spend the morning on issues such as Georgia, Ukraine and Afghanistan.

According to several credible reports, he came out with a threat that the US would “go it alone” on defence – a threat many officials and ambassadors interpreted as the US leaving the NATO alliance – unless Europe dramatically increased its defence spend in short order. It was reportedly met with “total stunned silence and then utter panic”, said one source.

Stoltenberg ordered a change to the agenda. NATO partners – including Australia’s defence minister Marise Payne – were ordered out of the room, as an emergency session of NATO leaders convened to thrash out the issue. Aka, mollify the US president.

When he emerged on stage in front of the media a few hours later, Trump claimed a remarkable victory.

Truly, he said, he was a “very stable genius”.

For years, he said, presidents had come to NATO and talked about increasing defence spending.

But the 2 per cent figure had been “a range, a goal … an amorphous number” that through his stern negotiations had been turned into a “real commitment”.

In the past year US allies had spent $US33 billion more on defence. And that, he repeatedly pointed out, was thanks to his strong words at the 2017 NATO summit.

Now, he could announce there had been a “tremendous amount of progress” and his allies had all agreed to lift their spending to “levels never thought of before”.

Yes, 2 per cent, but it “will be going up quite a bit higher than that”.

“We are doing numbers like they’ve never done before,” he said.

A cynic would see a raw transactional plan under Trump’s approach.

On Wednesday he did his utmost to disrupt (on reservations over national security, which to be fair he is not alone in holding) a plan to open a new gas pipeline from Russia to Germany – at a time the US is massively increasing its natural gas exports, albeit at a higher price than Russia’s.

And on Thursday he followed his demand for more defence spending with an unsubtle marketing pitch for US defence equipment, “so much better than anyone else’s”, he said, “the US makes by far the best jets, the best missiles, the best guns”, and if a poorer NATO member couldn’t afford them all then “we will help them out a little bit, make sure they’re able to get payments”.

It was virtually the patter of a car lot salesman.

Nevertheless, Trump grandly declaimed, his dream would be for the US (and presumably all his allies, gradually paying back their hire-purchase plans) to have “the best equipment in the world and never have to use it”.

“We want peace all over,” he said, messianically, “We want to solve problems, we are looking for peace. We are building up the military because I believe through strength you get peace.”

That, by the way, was the ultimate dream for his summit with Vladimir Putin in Helsinki on Monday.

“No more nuclear weapons anywhere in the world … no more wars or conflict, cures for all diseases … we’ll start from there.”

On Monday, Trump said he would discuss with the Russian president Syria, and “about [election] meddling, I will be asking that question again … he may deny it, it’s one of those things, all I can say is ‘did you?’ and ‘don’t do it again’.”

He left open the idea of recognising Crimea as part of Russia – a move that would horrify his allies and undermine the network of sanctions put in place after Russia’s illegal annexation of the Ukraine province.

Trump blamed Obama for allowing the annexation to happen – “I would not have allowed it to happen” – but he said “what will happen to Crimea, that I can’t tell you”. He pointed out that Russia had built a new bridge to Crimea and spent billions on a submarine port.

He even suggested he would discuss pulling back on NATO’s military exercises in eastern Europe – exercises agreed back in 2014 as a deterrence to Russian ambitions, and to reassure NATO’s most eastern members that the NATO defence pact still stood, and allies would come to their aid if their borders were breached.

On the summit as a whole: “It could lead to something productive.”

There was no mention of Novichok, the chemical weapon traced back to Russia that killed an innocent British citizen on English soil a few days ago.

“Ultimately he’s a competitor … he’s not my enemy and hopefully someday, maybe he’ll be a friend. But I just don’t know him very well.

An hour after Trump’s Air Force One roared over NATO HQ and off to the UK, Stoltenberg at last got his moment on the stage.

It had been a “very good summit”, he said. There had been frank discussions and the allies had heard Trump’s message “loud and clear”.

Could he identify the big new financial commitments that Trump had announced he’d won? Well, no. Stoltenberg pointed to the official declaration of the day before. That still stood (other leaders including France's and Italy's confirmed no additional spending had been agreed).

Beyond that was a “new sense of urgency” and an agreement to “redouble our efforts” to lift defence spending, Stoltenberg said.

“The most important thing is substance, and on substance this summit delivered,” he said.

But the room was half empty. The Trump circus had already moved on.