Washington: George W. Bush saw a "thumpin'." Barack Obama saw a "shellacking." Donald Trump sees a "Big Victory." Never one to admit defeat, even in the face of a major setback, President Trump wasted little time on Wednesday morning trying to frame his party's election losses as a win even though Democrats seized control of the House of Representatives.

But even as he claimed victory, he quickly went on offense against the newly elected Democratic House, threatening to retaliate if the opposition uses its new subpoena power to investigate him for corruption and obstruction of justice in an early foreshadowing of the bitter partisan warfare that could dominate the next two years.

"If the Democrats think they are going to waste Taxpayer Money investigating us at the House level, then we will likewise be forced to consider investigating them for all of the leaks of Classified Information, and much else, at the Senate level," he wrote. "Two can play that game!"

Then, in a head-spinning pivot, Trump shortly afterward endorsed Rep. Nancy Pelosi, D-Calif., for House speaker and even volunteered Republican votes if she cannot muster enough in her own caucus.

"In all fairness, Nancy Pelosi deserves to be chosen Speaker of the House by the Democrats," he wrote. "If they give her a hard time, perhaps we will add some Republican votes. She has earned this great honour!"

Whether he meant it as a gracious gesture or a tweak because he enjoys having Pelosi as a foil was not immediately clear. 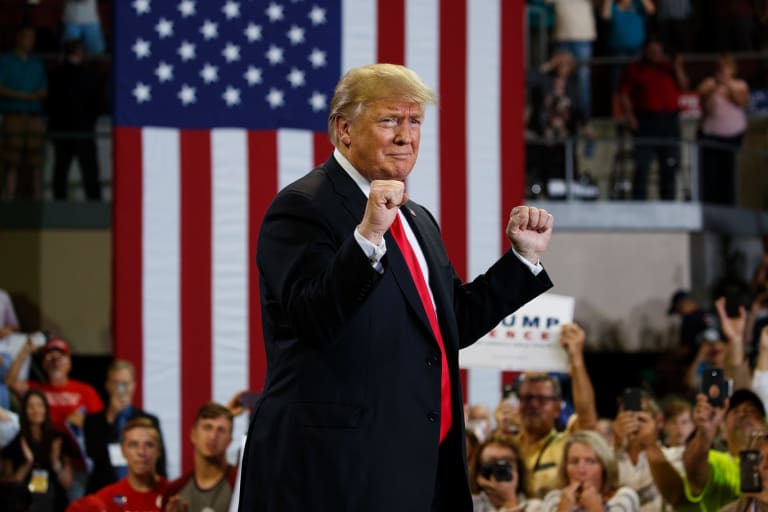 While Bill Clinton, Bush and Obama expressed humility following major midterm losses in 1994, 2006 and 2010, Trump acted as if he had nothing to regret. He scheduled a news conference for 11:30am to discuss "our success in the midterms" and offered no suggestion that he would change course to deal with the new reality that he will now have to share power with Democrats.

Trump had every reason to feel good about the results in the Senate, where Republicans knocked off three Democratic incumbents, in Indiana, North Dakota and Missouri, and were leading in Florida and Montana, while losing only one of their own seats in Nevada. If they hold on to their current leads, Republicans will increase their majority in the upper chamber from 51 seats to 55, giving them far more manoeuvreing room as they confirm judges and other appointments by Trump.

But the loss of the House is a major blow to the president, whose party until now controlled all the levers of power in Washington and still had trouble passing some of his top legislative priorities other than tax cuts. As of Wednesday morning, Democrats had picked up 26 seats with 23 races still to be called.

The turnover in the House foreshadows a dramatic change in Trump's presidency. A Democratic House not only can block Trump's priorities like building a wall along the southern border, but it also can use subpoena power to investigate all manner of issues that he had been protected from until now.

Among other things, Democrats likely will demand the release of tax returns that he has kept secret, look into his business dealings and reopen the House investigation into any ties between Trump's team and Russia during the 2016 presidential election.

"We'll fill in the gaps on the Russia investigations," Rep. Eric Swalwell, a Democrat from California and member of the House Intelligence Committee, said on NBC News on Wednesday morning. "The American people will see his tax returns, not because of any voyeuristic interest, but because they should know if he is corrupt. And we will look at the cashing in of access to the Oval Office and that has been concerning and his financial entanglements overseas."

More dangerous to the president, a Democratic House has the power to impeach him, even if it would not be able to muster the two-thirds vote required for conviction in the Senate. Democratic leaders, including Pelosi, have resisted the idea of impeachment, but could come under enormous pressure from the party's liberal base, especially if Robert Mueller, the special counsel, produces a report with damning information.

The pressure on Democrats was immediate.

"The American people have voted for real change, and it's critical that these new representatives recognise this will only come with a true political reckoning for the corruption, self-dealing and lawlessness exemplified by Mr. Trump," said Tom Steyer, a liberal California billionaire who has financed a drive to push for impeachment. "He cannot be permitted to continue to break the law with impunity."

Trump sought to claim that the election losses were not a reflection on him. Republicans who supported his policies won in Tuesday's elections, he asserted, and "those that did not, say goodbye!"