Republican says Trump’s decision to pull back troops from northeast Syria could be ‘biggest mistake’ of his presidency. 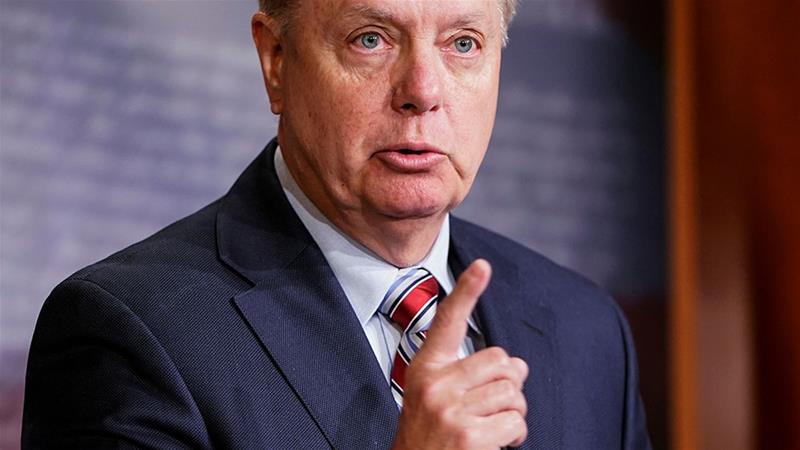 US President Donald Trump lashed out on Wednesday over sharp bipartisan criticism of his decision to pull back US troops from northeastern Syria, saying he is focused on the “BIG PICTURE” that does not include US involvement in “stupid endless wars” in the Middle East.

His comments on Twitter came as Turkey launched a long-threatened military operation in northeast Syria to remove Kurdish-led forces from the border area and create a “safe zone” to resettle millions of Syrian refugees.

Turkey had been poised to advance into northeast Syria since US troops began vacating the area on Sunday in an abrupt policy shift by Trump.

“Fighting between various groups that has been going on for hundreds of years. USA should never have been in Middle East,” Trump said in a series of morning tweets. “The stupid endless wars, for us, are ending!”

But many within Trump’s own party ramped up their criticism of his decision on Wednesday, with Republican Senator Lindsey Graham vowing to lead the “effort in Congress to make [Turkish President Recep Tayyip] Erdogan pay a heavy price”.

“Pray for our Kurdish allies who have been shamelessly abandoned by the Trump administration. This move ensures the re-emergence of ISIS,” Graham said, referring to the Islamic State of Iraq and the Levant (ISIL or ISIS).

In withdrawing its troops from the area, the US effectively abandoned the Syrian Democratic Forces (SDF), its main ally in the battle against ISIL.

The SDF is led by the Kurdish People’s Protection Units (YPG), which Turkey considers a “terrorist” group.

Trump appeared to try to assuage his critics later on Wednesday, saying the US does not “endorse” Turkey’s operation and has made it clear that it is a “bad idea”.

The US president added that Turkey has “committed to protecting civilians, protecting religious minorities, including Christians, and ensuring no humanitarian crisis takes place” and that the US “will hold [Ankara] accountable to this commitment.

Prior to Turkey’s official launch of its operation, Graham had called Trump’s decision a “disaster in the making” and said that he and Democratic Senator Chris Van Hollen would introduce legislation calling for sanctions against Ankara if Turkey launched an operation in northeast Syria. He also said they would call for Turkey’s “suspension from NATO if they [attacked] Kurdish forces who assisted the US in the destruction of ISIS Caliphate”.

Speaking to Fox News on Wednesday, Graham said that if Trump “follows through with this, it would be the biggest mistake of his presidency”. Graham did not mention the possible sanctions resolution on Wednesday.

Graham’s criticism has been echoed by others within the party, including Senate Majority Leader Mitch McConnell, who said “a precipitous withdrawal of US forces from Syria would only benefit Russia, Iran and the Assad regime. And it would increase the risk that ISIS and other terrorist groups regroup”.

Trump maintains that he campaigned on bringing American troops home.

“GOING INTO THE MIDDLE EAST IS THE WORST DECISION EVER MADE IN THE HISTORY OF OUR COUNTRY!” the US president tweeted early on Wednesday morning.

He added, “Our focus is on the BIG PICTURE! THE USA IS GREATER THAN EVER BEFORE!”

But the US military has kept a decades-long focus on the Middle East as part of a strategy of stopping or minimising security threats before they spread to American and allied shores.

As a further sign that the military does not share Trump’s view that the fight against the armed group is over, a press release on Wednesday by the US-led military coalition combating ISIL highlighted recent battlefield gains. It concluded by saying that “removing” ISIL fighters and weapons “remains a top priority” as the group “continues to plot attacks against innocent civilians and our partners throughout Iraq and northeast Syria”.

Trump has long criticised President George W Bush’s decision to invade Iraq in 2003, but the subsequent rise of armed groups like ISIL has convinced many national security officials, and members of Congress that a precipitous US troop withdrawal from the region would leave the US and its allies even more vulnerable.

Meanwhile, Trump announced on Tuesday that he and Erdogan will meet at the White House on November 13.