Donald Trump defied a judge who ruled Wednesday that blocking critics on Twitter was unconstitutional – keeping his bar on Rosie O’Donnell, Chrissy Teigen and others in place.

The judge had ruled in New York that Trump may not legally block Twitter users because doing so violates their right to free speech under the First Amendment of the Constitution.

The ruling by U.S. District Judge Naomi Reice Buchwald in Manhattan came in response to a lawsuit filed against Trump in July by the Knight First Amendment Institute at Columbia University and several Twitter users.

Buchwald agreed with the plaintiffs’ contention that the discussions arising from Trump’s tweets should be considered a public forum.

She rejected an argument made by Justice Department lawyers that Trump’s own First Amendment rights allowed him to block people with whom he did not wish to interact.

Buchwald signed off on the ruling earlier on Wednesday but many of the accounts remained unblocked as of this afternoon. Chrissy Teigen tweeted at the president saying ‘we meet again’ after he blocked the model last year – but she may have rejoiced prematurely, as no blocks appeared to have been lifted 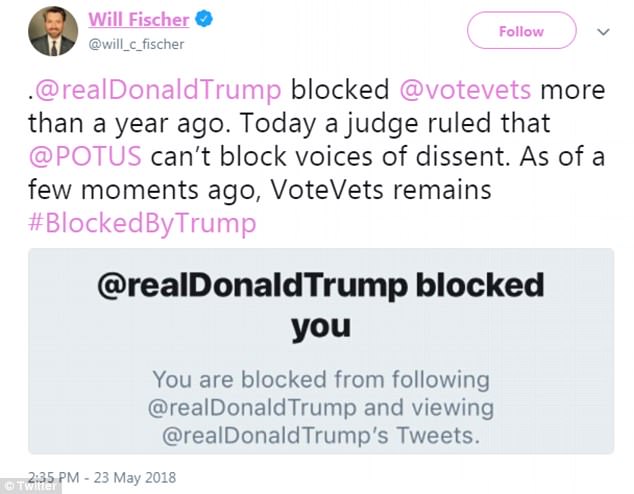 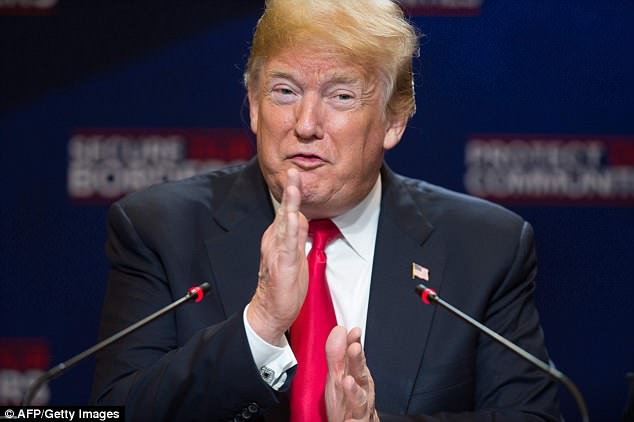 Unconstitutional: The president was slapped down by a federal judge in New York who said that blocking his critics was a breach of the First Amendment

Among the critics he had blocked on the social media forum are Chrissy Teigen and Rosie O’Donnell.

Justice Department lawyers had argued it was Trump’s prerogative to block followers, no different from the president deciding in a room filled with people not to listen to some.

But Buchwald ruled that the tweets were ‘governmental in nature.’

‘The President presents the @realDonaldTrump account as being a presidential account as opposed to a personal account and, more importantly, uses the account to take actions that can be taken only by the President as President,’ the judge said.

The judge noted that another defendant, Daniel Scavino – the White House’s social media director and an assistant to the president – can unblock those followers without the president needing to do it himself.

The judge dismissed Sarah Huckabee Sanders as a defendant in the case after it was established she does not have access to Trump’s account.

Buchwald also said she recognized the impact on the individuals by Trump’s action was not ‘of the highest magnitude.’ She said the First Amendment protects people even from trivial harm.

The judge did not issue an order against Trump, and the plaintiffs did not ask for one. But in cases like this, plaintiffs can, in theory, go back and ask for such an order, and if it is not obeyed, the violator can be held in contempt.

Buchwald said she rejected the assertion that an injunction can never be lodged against the president but ‘nonetheless conclude that it is unnecessary to enter that legal thicket at this time.’ 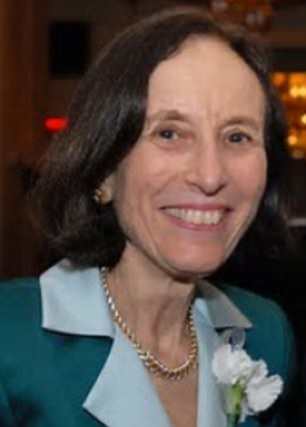 Also named: Dan Scavino, the White House director of social media, was also named as a defendant in the case which was ruled on by U.S. District Judge Naomi Reice Buchwald 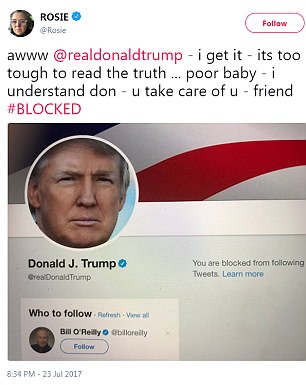 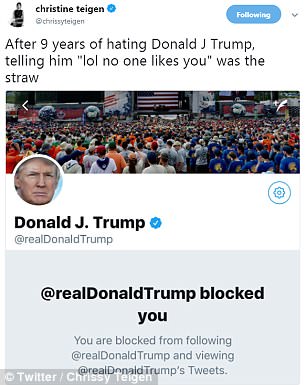 How it looks: Trump has blocked critics from accessing his Twitter account. Now a federal judge has ruled he is breaching the First Amendment

Teigen took to Twitter after the news broke to tweet at the president saying: ‘well well well we meet again’, after he blocked her last year.

Eugene Volokh, a University of California Los Angeles School of Law professor who specializes in First Amendment issues, said the decision´s effect would reach beyond Trump.

‘It would end up applying to a wide range of government officials throughout the country,’ he said.

The individual plaintiffs in the lawsuit include Philip Cohen, a sociology professor at the University of Maryland; Holly Figueroa, described in the complaint as a political organizer and songwriter in Washington state; and Brandon Neely, a Texas police officer.

Cohen, who was blocked from Trump’s account last June after posting an image of the president with words ‘Corrupt Incompetent Authoritarian,’ said he was ‘delighted’ with Wednesday’s decision.

‘This increases my faith in the system a little,’ he said.

Cohen said Trump had not yet unblocked him as of late Wednesday afternoon.

“Personally, I´m skeptical that he will take that step without more legal pressure,” he said.

The U.S. Department of Justice, which represents Trump in the case, said, ‘We respectfully disagree with the court’s decision and are considering our next steps.’

Trump was a prolific tweeter from his @RealDonaldTrump account even before being elected in 2016 and has since made it an integral and controversial part of his presidency.

Aides reportedly have tried to rein in his tweeting, which often starts early in the morning.

But he has remained unfettered and used Twitter to promote his agenda, announce policy and attack critics, especially the media, and the investigation into possible Russian connections with his campaign. 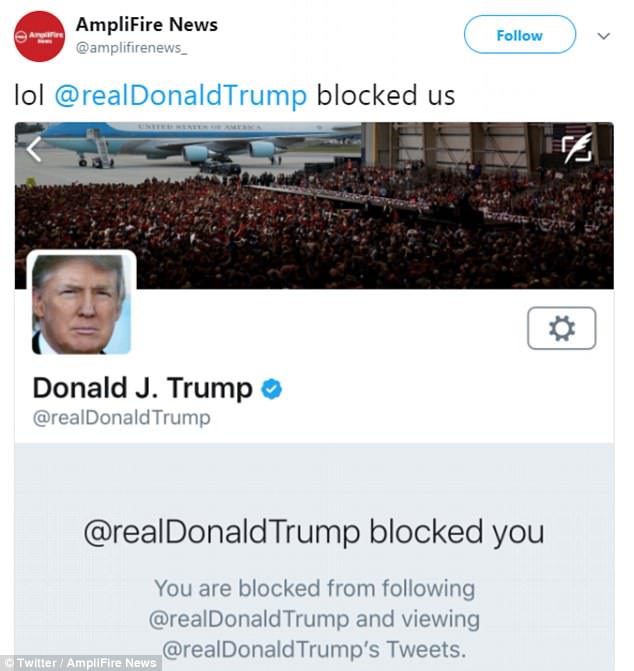 Not just the famous: A left-wing Twitter platform was also blocked by the President

The Knight Institute and the individual Twitter users claimed in their lawsuit that by blocking users for their views, Trump was shutting them out of discussion in a public forum, violating the First Amendment.

When one Twitter user blocks another, the blocked user may not respond to the blocker’s tweets on the social media platform.

She stopped short of directly ordering Trump to unblock users, saying it was not necessary to enter a ‘legal thicket’ involving courts’ power over the president.

‘Because no government official is above the law and because all government officials are presumed to follow the law once the judiciary has said what the law is, we must assume that the President and Scavino will remedy the blocking we have held to be unconstitutional,’ she wrote.

Buchwald is a Bill Clinton-appointed judge who was previously a federal prosecutor.