Washington: President Donald Trump on Monday said he is considering holding his summit with North Korean dictator Kim Jong-un at the demilitarised zone with South Korea, rather than in a third-party country, because of the potential to have a "great celebration."

The president's announcement, made first in a tweet and then reiterated during a news conference, came after his aides had focused for weeks on arranging the historic meeting outside the Korean Peninsula. Trump also disclosed that Singapore was a leading option, but he said he was intrigued at the idea of using "Peace House," a three-story South Korean building in the border village of Panmunjom, where Kim met last week with South Korean president Moon Jae-in. 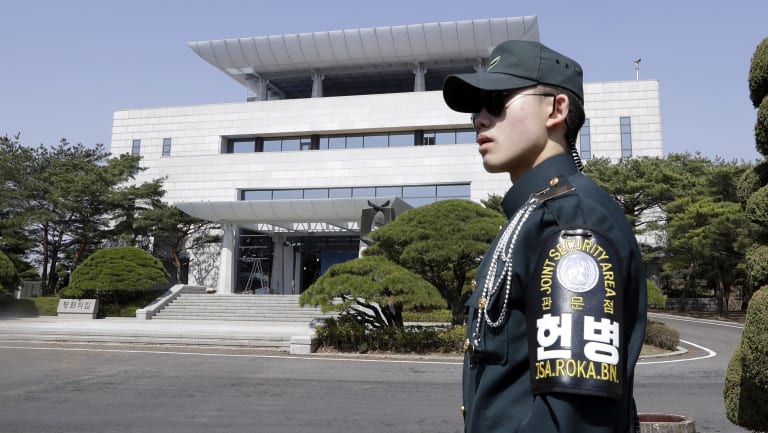 Is it grand enough for Donald Trump? the Peace House, the venue for the summit between South Korean President Moon Jae-in and North Korean leader Kim Jong un.

"I threw that out today as an idea," Trump said at the news conference at the White House with Nigerian President Muhammadu Buhari. Trump told reporters that he relayed his interest to Moon.

"There's something I like about it because you're there," he said. "If things work out, there's a great celebration to be had on site."

In some regards, the demilitarised zone, a tensely guarded strip of land at the 38th parallel that has divided the peninsula since the 1953 Korean War armistice, has long been regarded as an obvious choice to hold diplomatic talks between the United States and North Korea.

But some Trump aides had been wary of having the president travel to meet Kim so close to his own turf, lest it appear too deferential and come off as a meeting between equally powerful world leaders. Other foreign policy analysts speculated Trump would want a grander setting than the gritty demilitarised zone. 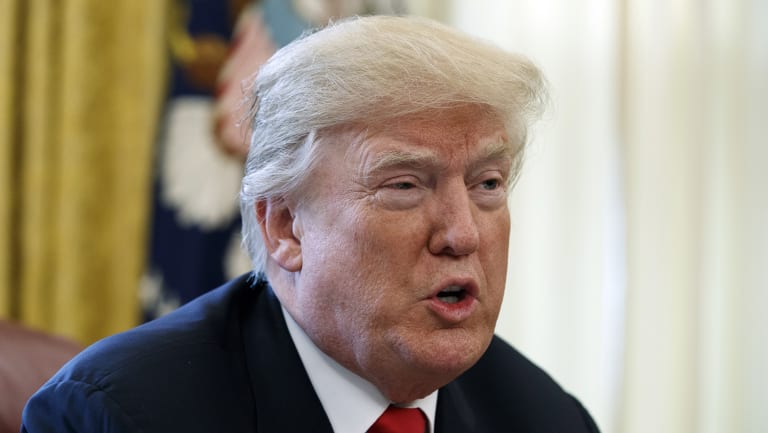 Eyes on the optics: US President Donald Trump

But the Moon-Kim meeting produced astonishing images of the two leaders shaking hands across the dividing line before stepping, in turn, back and forth over the line together – a symbolic, but emotionally powerful moment for many South Koreans who have relatives living in the North.

Trump's embrace of the site could carry some risk given that a "celebration" during his summit with Kim could be premature. White House aides have expressed scepticism in private of Kim's motives, given North Korea's history of violating past deals aimed at stunting its nuclear weapons and ballistic missile programs.

"Maybe a lot of things will change, but Kim Jong-un has been very open, very straightforward so far," Trump said. "I can only say 'so far,' but he's talking about getting rid of the [nuclear testing] site. He's talking about no research, no launching ballistic missiles, no nuclear testing. He has lived up to that for a longer period of time than anybody has seen." 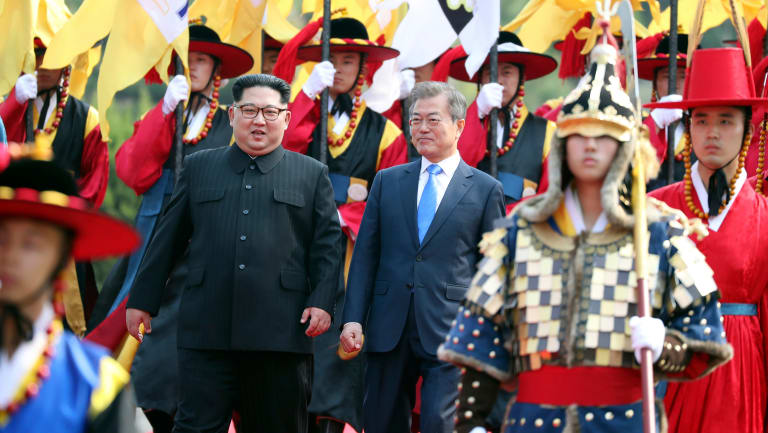 North Korean leader Kim Jong-un, left, and South Korean President Moon Jae-in walk together through a honour guard at the border village of Panmunjom in the Demilitarised Zone.

His comments were the most specific to date about the logistics of the meeting, which Trump said has the potential to be celebratory in tone. Trump said last week that a site for the historic meeting had been narrowed to two or three possible locations, with speculation focusing on other countries in the region. Mongolia and Geneva, were also said to be under consideration, along with Singapore.

"Numerous countries are being considered for the MEETING, but would Peace House/Freedom House, on the Border of North & South Korea, be a more Representative, Important and Lasting site than a third party country? Just asking!" Trump wrote on Twitter on Monday morning.

At the news conference, Trump said that "the good news is, everybody wants us. This has a chance to be a big event."

Trump, who rose to prominence as a real estate promoter and former reality television star, has frequently boasted about the size of his rally crowds and other metrics based on the optics of his events. On numerous occasions he has taken credit for a "successful" Winter Olympics in PyeongChang, South Korea, asserting that his focus on North Korea, which sent a delegation to the Games, helped drive up ticket sales.

At a campaign-style rally in Michigan on Saturday, Trump told the audience that he expects to meet Kim in the next three or four weeks.

Experts have noted that any deal between Trump and Kim is likely to be an overarching statement of common goals rather than a detailed agreement that provides a road map toward eliminating North Korea's nuclear program. Those details, including such difficult issues as ensuring compliance through inspections and the potential lifting of economic sanctions on the North, would have to be worked out in subsequent meetings between the two countries, as well as South Korea, China, Japan and the United Nations.

At the news conference, Trump reiterated a previous pledge to walk away from the summit with Kim if talks do not go well. "Got to get rid of the nuclear weapons," Trump said. "If it's not a success, I will respectfully leave. It's that simple."

Patrick Cronin, an Asia-Pacific security analyst at the Centre for a New American Security, said the demilitarised zone makes sense in part because that area just staged a successful inter-Korea summit and because Kim is said not to want to travel too far from home.