Paris: President Donald Trump could not attend a commemoration in France for US soldiers and marines killed during World War I on Saturday because rain made it impossible to arrange transport, the White House said.

The last minute cancellation prompted widespread criticism on social media and from some officials in Britain and the United States that Trump had "dishonoured" US servicemen. 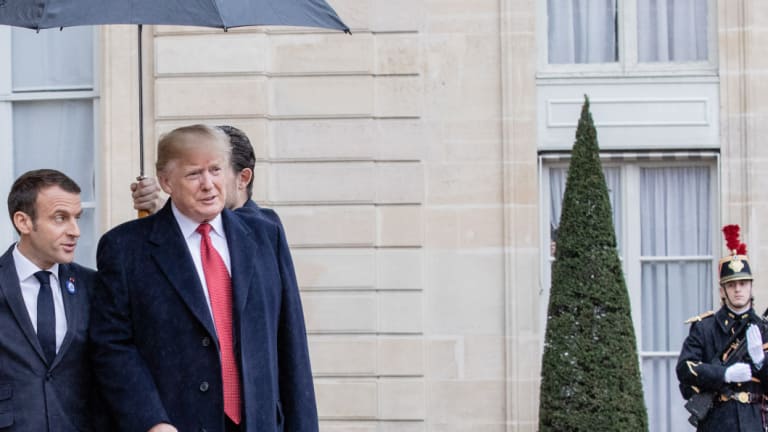 Trump is welcomed in Paris during the World War I commemorations.Credit:Bloomberg

The president was scheduled to pay tribute at a ceremony at the Aisne-Marne American Cemetery in Belleau, about 85 km east of Paris, with his wife Melania. But light steady rain and a low cloud ceiling prevented his helicopter from travelling to the site.

"(Their attendance) has been cancelled due to scheduling and logistical difficulties caused by the weather," the White House said in a statement, adding that a delegation lead by Chief of Staff John Kelly, a retired general, went instead.

The decision prompted a rash of criticism on Twitter, with Nicholas Soames, a British member of parliament who is a grandson of former Prime Minister Winston Churchill, saying that Trump was dishonouring US servicemen.

"They died with their face to the foe and that pathetic inadequate @realDonaldTrump couldn't even defy the weather to pay his respects to the Fallen", Soames wrote on Twitter.

White House officials said the decision was taken due to the weather and cited security concerns in hastily arranging a motorcade. Similar concerns prevented Trump from reaching the demilitarized zone between North and South Korea a year ago when foggy weather prevented his helicopter from landing.

Ben Rhodes, who served as deputy national security adviser for strategic communications under President Barack Obama, said the excuse about the inclement weather did not stand up.

"I helped plan all of President Obama's trips for 8 years," he wrote on Twitter. "There is always a rain option. Always."

Despite the light rain, French President Emmanuel Macron and German Chancellor Angela Merkel held a moving ceremony in Compiegne, northeast of Paris, to mark the 100th anniversary of the signing of the World War One armistice.

Canadian Prime Minister Justin Trudeau attended his own ceremony to pay tribute to Canadian troops killed at Vimy Ridge, on the battlefields of northeastern France.

Around 70 leaders, including Trump, are scheduled to gather at the Arc de Triomphe in Paris on Sunday morning to mark the commemoration of the centenary of the end of the war, when some 10 million soldiers were killed during four years of grinding conflict.

It was not clear what Trump decided to do instead of attending the cemetery. The White House said he was at the residence of the US ambassador in Paris. During that time he sent a tweet wishing a "Happy 243rd Birthday" to the US Marine Corps.

The president is scheduled to take part in a ceremony at the Suresnes American Cemetery to the west of Paris on Sunday afternoon, when he is expected to make formal remarks.