With Netanyahu looking over his shoulder at the White House, Trump signed a proclamation officially granting U.S. recognition of the Golan as Israeli territory – a dramatic shift from decades of U.S. policy.

The move, which Trump announced in a tweet last Thursday, appeared to be the most overt gesture by the Republican president to help Netanyahu, who had been pressing Trump for the move since February 2017.

Israel captured the Golan in the 1967 Middle East war and annexed it in 1981 in a move not recognized internationally.

Netanyahu, who faces an election on April 9, earlier on Monday said he was cutting short his U.S. visit after a rocket fired from the Gaza Strip, blamed on Hamas, wounded seven people near Tel Aviv. Israel launched retaliatory air strikes in Gaza.

Israel’s prime minister arrived in Washington on Sunday, originally for a four-day trip.

His chief rival for the premiership, Benny Gantz, also visited the U.S. capital, telling a major pro-Israel lobbying organization that he was the better alternative to lead the country.

In signing the proclamation, Trump said “This was a long time in the making.”

He handed the pen that he used for his signature to Netanyahu, and said: “Give this to the people of Israel.”

The prime minister welcomed Trump’s action and said Israel had never had a better friend. He harked back to two previous Middle Eastern wars in justifying Israel’s need to hang on to the Golan.

Syria reacted swiftly to Trump’s proclamation, calling it a “blatant attack” on its sovereignty and territorial integrity and saying it had a right to reclaim the Golan.

A U.N. Security Council resolution adopted unanimously by the 15-member body in 1981 declared that Israel’s “decision to impose its laws, jurisdiction and administration in the occupied Syrian Golan Heights is null and void and without international legal effect.” It also demanded Israel rescind its decision. 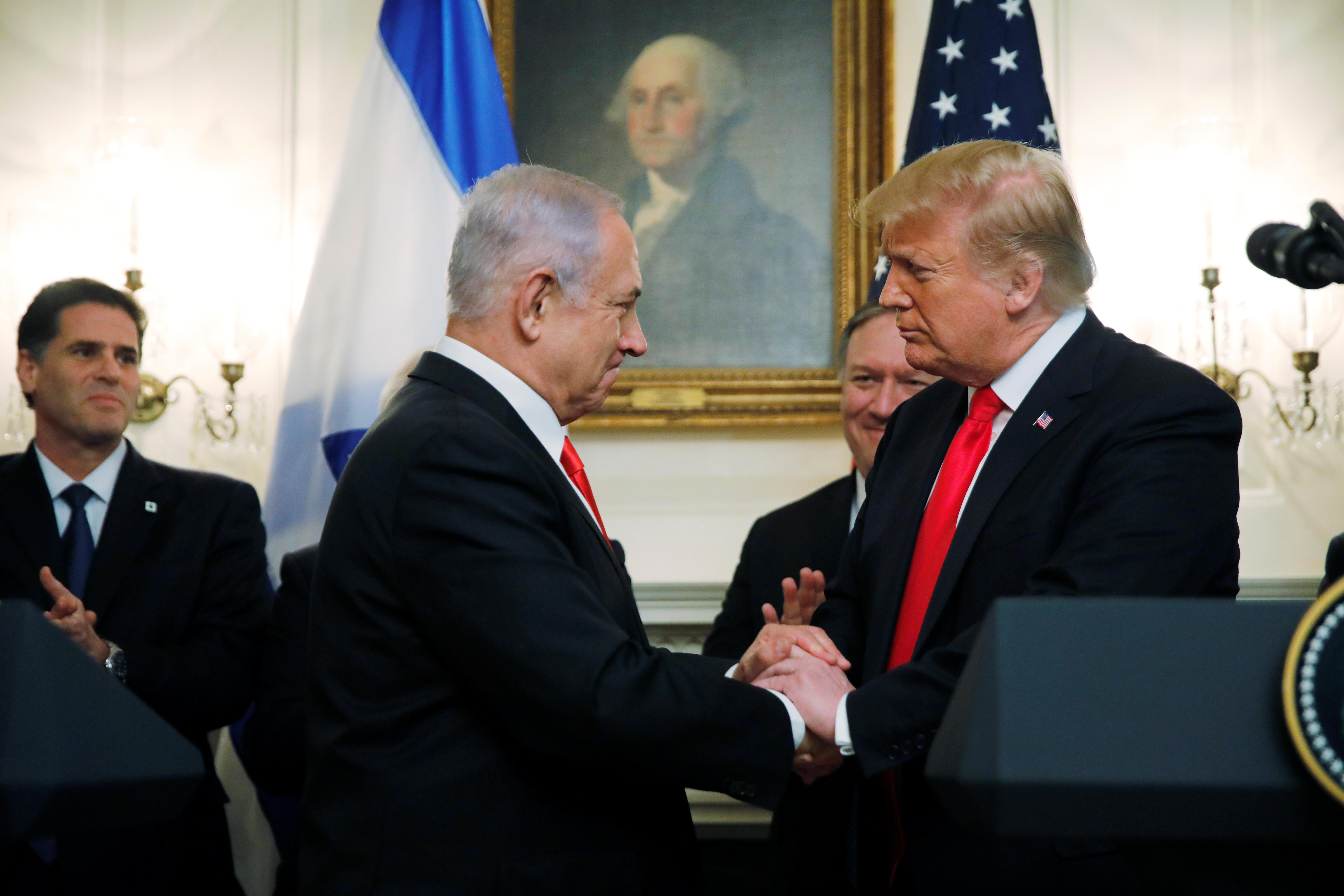 NATO ally Turkey termed the U.S. recognition unacceptable and said it would take action against it, including at the United Nations, Foreign Minister Mevlut Cavusoglu said. The Arab League also condemned the move.

Palestinian President Mahmoud Abbas, who has refused to talk to the United States since Trump ordered the U.S. embassy moved from Tel Aviv to Jerusalem, expressed his “absolute rejection” of the Golan move in a statement issued by the Palestinian Authority news service Wafa.

“The presidency reaffirmed that sovereignty is not decided by either the US or Israel no matter how long the occupation lasts,” the statement said.

Elsewhere in Washington, the American Israel Public Affairs Committee (AIPAC), a pro-Israel group, held its annual meeting with speaker after speaker expressing U.S. support for strong ties with the country.

“We stand with Israel because her cause is our cause, her values are our values, and her fight is our fight,” Vice President Mike Pence said on Monday.

Pence also talked tough against Iran, saying that under Trump, “America will never allow Iran to obtain a nuclear weapon.”

Netanyahu challenger Gantz appeared before the gathering, and vowed to protect his country against threats from Iran and Syria. He called for unity in Israel. 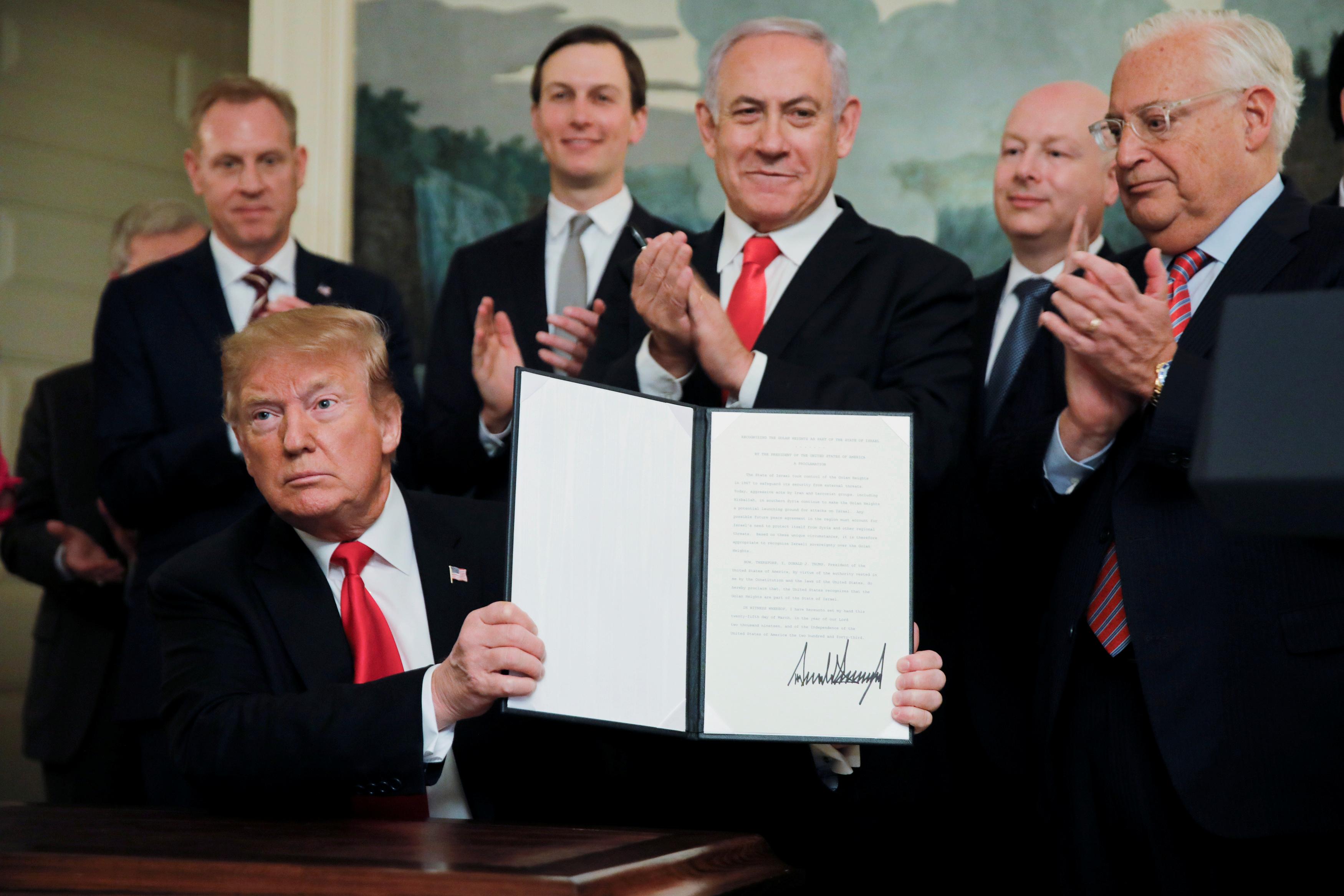 “We must remember if that we want hope, we must have unity,” he said.