President Trump said Thursday that ‘nothing has changed’ in terms of a summit with North Korea and the White House has ‘not been told anything’ about a cancellation by Kim Jong-un’s government.

Everything the White House knows about North Korea’s threats to cancel the June 12 meet-up between Trump and Kim, the president said, it’s getting from news stories, just like the press.

If the meeting doesn’t get cancelled, he said, ‘I think that we’ll probably have a very successful meeting.’

‘My attitude is whatever happens happens,’ Trump said. ‘Deals, that’s what I do, deals…He absolutely wanted to do it.’

Trump observed that Kim, perhaps, ‘spoke with China and changed his mind. The president admitted that Kim’s visit to Beijing last week on Tuesday was ‘a little bit of a surprise’ to the Trump administration.

But he said of the games playing, ‘I want to give everybody the benefit of a doubt.’

‘I’m willing to do a lot… He’ll have protections,’ Trump said. ‘The best thing he could do is make a deal.’ 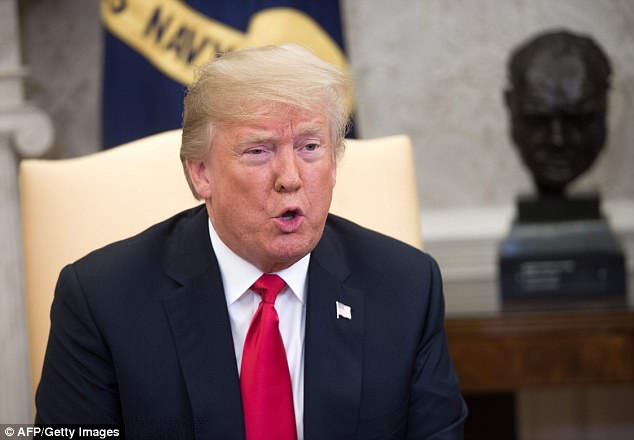 Providing assurances to Kim, Trump said that the deal he intends to make with North Korea would keep the dictator in power. He said that Kim wouldn’t be ousted like Libya’s Muammar Gaddafi was after he voluntarily dismantled his nuclear program in order to normalize relations with the U.S.

With Kim it would be ‘something where he’d be there, he’d be running his country. His country would be very rich,’ Trump said.

‘If we make a deal, I think Kim Jong-un will be very, very happy,’ he said.

In her first on-camera briefing with press since North Korea made the threats, the president’s spokeswoman said, ‘If the North Koreans want to meet, we’ll be there. And at this point, there is not a lot of change beyond that, and certainly not in our process.’

She told a reporter who asked ‘what game’ North Korea is at, ‘You’d have to ask North Korea what game they’re playing. I can tell you what we’re doing, and we’re continuing to move forward in preparations.’

Her reaction to the threats to call off the summit prompted a journalist to ask if North Korea is essentially in the driver’s seat.

‘They’re certainly not in the driver’s seat. Nothing could be further from the truth. But they’re the ones that extended the invitation, we’ve accepted it,’ she responded. ‘If they want to meet, we’re happy to do that. If they don’t, as the President has said, we’ll see what happens. But we’re going to continue the maximum pressure campaign in the meantime.’

Trump nixed a press conference with reporters this afternoon and instead took questions in the Oval Office from a small group of journalists who just happened to be assigned to cover him in close quarters today.

He said the U.S. is continuing to negotiate with North Korea on the exact location within Singapore that they’ll meet at and how the summit will be formatted.

‘They’ve been negotiating like nothing happened,’ he said. ‘I can’t tell you yet. I will tell you very shortly. We’re going to know very soon.’

Trump said Wednesday that he would not back down from a commitment to denuclearize the Korean Peninsula as he responded to Kim latest demands.

Trump repeatedly told reporters asking if the planned meeting would move forward, ‘We’ll have to see.’

‘No decision. We haven’t been notified at all. We’ll have to see,’ he said during the Oval Office visit of the president of Uzbekistan. ‘We haven’t seen anything. We haven’t heard anything. We will see what happens, whatever is. It is.’ he added.

Asked by a journalist if Kim is bluffing, Trump would only say, ‘We’ll see what happens.’

‘Time will tell,’ he told reporters asking about the June 12 summit. 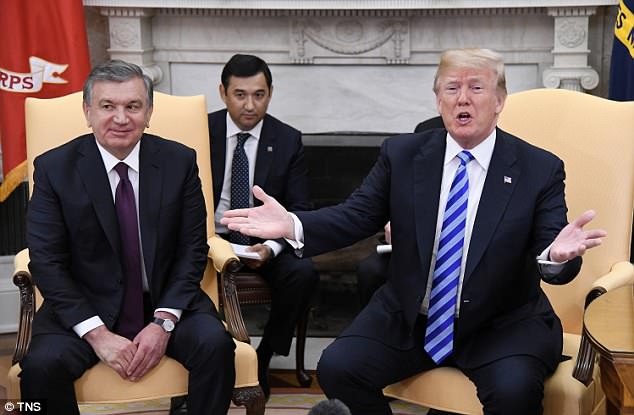 President Trump said Wednesday that he would not back down from a commitment to denuclearize the Korean Peninsula as his summit, as he responded to Kim Jong-un’s latest demands 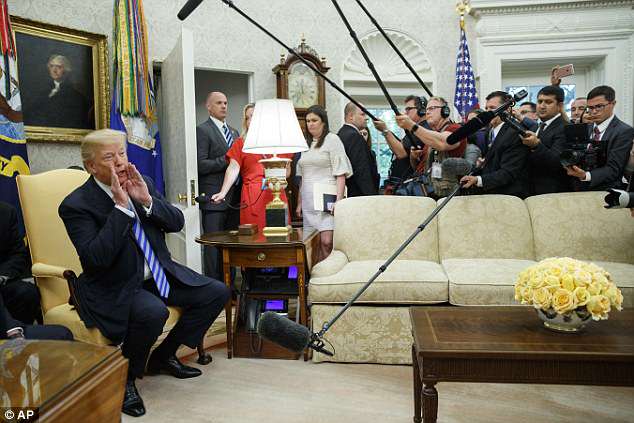 Trump repeatedly told reporters asking if the planned meeting would move forward, ‘We’ll have to see’

The White House’s line on Wednesday was that it remains optimistic that a sit-down will take place between President Trump and Kim, despite a flare-up in hostilities, and if doesn’t, the U.S. will keep its choke hold on North Korea’s economy.

North Korea first said that it objected to joint military exercises the U.S. and South Korea were conducting, warning that it would not sit idly by while the countries rehearsed their invasion.

It then blasted the U.S. for what it called a ‘hostile policy, nuclear threats and blackmail’ and went after the Trump National Security Advisor John Bolton in a second statement threatening to call off the talks between Trump and Kim.

In a statement provided to state news agency KCNA, North Korea’s first vice-minister, of foreign affairs, Kim Kye Gwan, took aim at Bolton’s comparison of the nuclear deal that Trump is pursuing to the Libya model that ultimately left dictator Muammar Gaddafi out to dry.

He explicitly took issue with the U.S. position of ‘abandoning nuclear weapons first, compensating afterwards’ saying the proposed terms are ‘essentially a manifestation of awfully sinister move to impose on our dignified state the destiny of Libya or Iraq which had been collapsed due to yielding the whole of their countries to big powers.’ 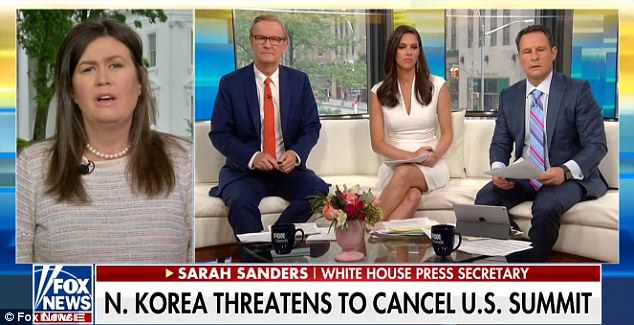 ‘We’re ready to meet, and if that happens that’s great. And if it doesn’t, we’ll see what happens. We’re still hopeful that the meeting will take place and we’ll continue down that path,’ White House Press Secretary Sarah Sanders responded on Fox & Friends

North Korea said in the statement that ‘we do not hide our feeling of repugnance’ toward Bolton. The isolated nation said that Trump would be wise to recall ‘twists and setbacks owing to the likes of Bolton’ and that he should avoid taking advice from ‘quasi-“patriots” who insist on the Libya model’ like his new national security advisor.

‘If President Trump follows in the footsteps of his predecessors, he will be recorded as more tragic and unsuccessful president than his predecessors, far from his initial ambition to make unprecedented success,’ the statement asserted.

‘However, if the U.S. is trying to drive us into a corner to force our unilateral nuclear abandonment, we will no longer be interested in such dialogue and cannot but reconsider our proceeding to the DPRK-U.S. summit.’

Press Secretary Sarah Sanders told reporters Wednesday morning that North Korean outrage was par for the course and the U.S. was moving ahead with preparations for the summit in Singapore.

‘The president said he wants to have the meeting,’ the official said. ‘But if we don’t, he’ll continue the ongoing maximum pressure campaign.’

Trump was non-committal as he spoke to reporters, claiming that the U.S. had neither seen nor heard anything about a cancellation. 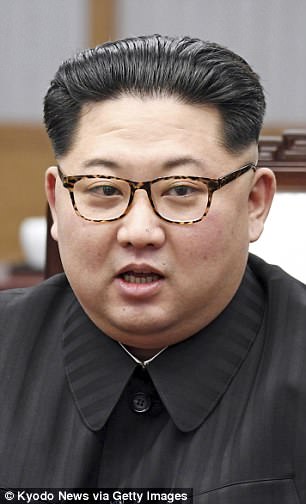 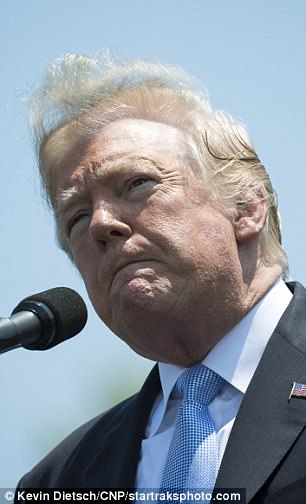 This photo from 2017 shows a vehicle carrying what appears to be an intercontinental ballistic missile during a military parade at Kim Il Sung Square in Pyongyang, North Korea

North Korea’s government said yesterday that it was considering calling off the planned nuclear summit between its dictator and Trump through state-run news agency KCNA.

Kim’s regime warned that ongoing ‘Max Thunder’ joint military exercises between the United States and South Korea could be a ‘rehearsal for invasion’ of the North.

‘The United States will also have to undertake careful deliberations about the fate of the planned North Korea-U.S. summit in light of this provocative military ruckus jointly conducted with the South Korean authorities,’ KCNA said.

Trump’s administration made no immediate moves to slow down preparations for the summit on Tuesday and tried to make it seem like business as usual on Wednesday at the White House.

Sanders, however, did not brief reporters from the podium for a second day in the row. She took a smattering of questions from reporters after her Fox News interview at 7:30 am and that was all.

In a statement on Tuesday afternoon, she simply said: ‘We are aware of the South Korean media report. The United States will look at what North Korea has said independently, and continue to coordinate closely with our allies.’ 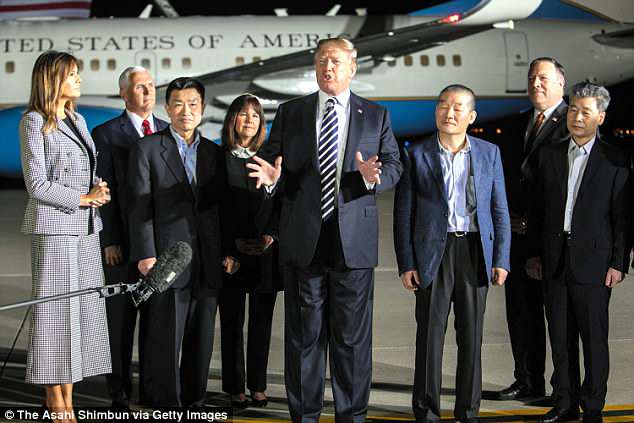 The North Koreans cited the military drills as the reason.

The meeting was to happen in the border town of Panmunjom, as a followup to Kim’s April meeting with his South Korean counterpart, Moon Jae-In.

The Trump administration had appeared to be making progress in recent weeks toward a new diplomatic framework with the hermit kingdom.

Last week Secretary of State Mike Pompeo traveled to Pyongyang on a mission to retrieve three Americans held prisoner in the communist nation.

He returned a day later with Kim Dong Chul, Kim Hak-song and Tony Kim on board his government jet. Trump, eager to reap the PR benefit of a public splash, went to Joint Base Andrews in Maryland at 2:00 in the morning to greet them personally.

The prisoner release was seen as a first step toward the planned summit, which Trump then announced would take place June 12 in Singapore. The State Department did not have a response to North Korea’s threat on Tuesday to call it off.

‘We have no information on that,’ said spokeswoman Heather Nauert, NBC reported. ‘Let’s not get ahead of ourselves. We need to verify it.’

The researchers are relying on commercial satellite imagery from May 7, according to the 38 North web site.

The site analyzed images which show significant changes that have been made at the location which are consistent with decommissioning.

Critics have argued that the cite already is in need of decommissioning, making its decommissioning less of a concession than it might otherwise seem.

‘Between April 20 and May 7, 2018, the probable engineering office building and a possible instrumentation shed located just outside the North Portal (where the last five underground nuclear tests have been conducted) were razed along with at least two smaller buildings or sheds,’ according to 38 North.

Pyongyang has pledged dismantle the test site some time between May 23 and May 25 in order to uphold its pledge to cease tests, its state media reported on Saturday. 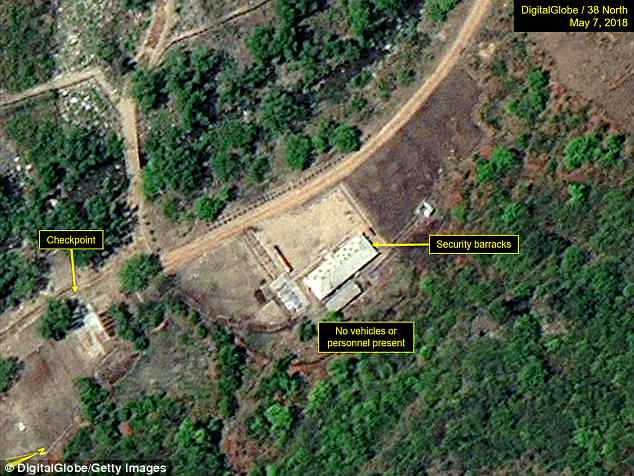 No personnel or significant activity is observed at the barracks area

Yesterday, North Korea’s ambassador to the UN in Geneva Han Tae-song announced the country’s intentions to work towards a complete ban on tests.

‘DPRK will join international desires and efforts for a total ban on nuclear tests,’ Han Tae-song said in an address to the Conference on Disarmament, using North Korea’s official acronym.

Han told the UN assembly that his country aimed to make more ‘efforts to achieve the development of intra-Korean relations, defuse acute military tensions and substantially remove the danger of the war on the Korean peninsula.’

‘It will make sincere efforts… to establish a durable lasting peace mechanism’ with its neighbour to the south, he said, urging the international community to ‘extend its active support in encouraging and promoting the current positive climate.’

The military exercises that apparently provoked the North Korean side are known as ‘Maximum Thunder.’ The drill involves F-15 and F-16 aircraft numbering more than 80, NBC News reported.

The annual drill has regularly been a thorn in the side of the North Koreans. U.S. military officials say it is needed to practice the kind of cooperation that would be necessary in any real live military situation on the heavily-armed Korean peninsula.

It includes both air-to-air and air-to ground mission practice.