US president also says he’ll meet Russia’s Putin, but Kremlin says no such arrangements have been made so far. 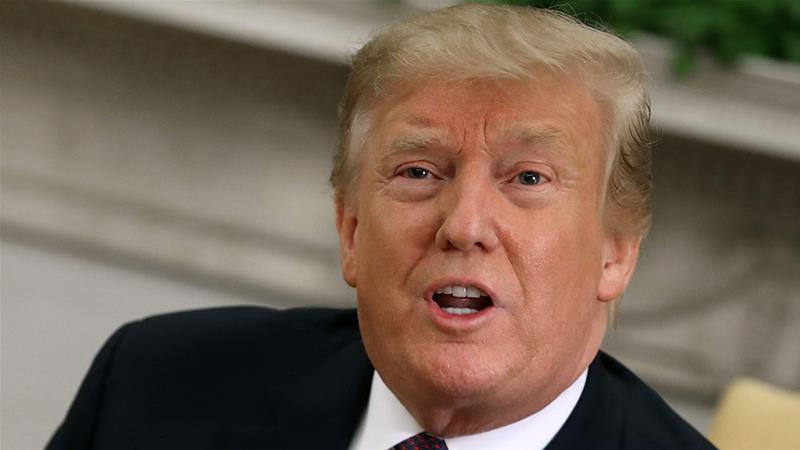 US President Donald Trump said on Monday that he will meet Chinese President Xi Jinping and Russian President Vladimir Putin at the G20 gathering in Japan next month.

Trump said he expects his discussion with Xi to be “very fruitful”, as the trade war between China and the United States intensified on Monday.

Earlier, China announced it would impose higher tariffs on a range of US goods including frozen vegetables and liquefied natural gas, a move that followed Washington’s decision last week to increase its own levies on $200 billion in Chinese imports.

Trump had warned Beijing not to retaliate. On Monday he said, “We’re dealing with them. We have a good relationship.”

Trump, who has embraced protectionism as part of an “America First” agenda, added that he had not yet decided whether to go ahead with tariffs on roughly another $325bn in goods from China.

For its part, China said on Monday it plans to set import tariffs ranging from five percent to 25 percent on 5,140 US products on a revised $60b target list. It said the tariffs will take effect on June 1.

“China’s adjustment on additional tariffs is a response to US unilateralism and protectionism,” its finance ministry said. “China hopes the US will get back to the right track of bilateral trade and economic consultations and meet with China halfway.”

The prospect that the US and China were spiralling into a no-holds-barred dispute that could derail the global economy has rattled investors and led to a sharp selloff on equities markets in the past week.

Trump stepped up his verbal attacks on China on Friday after two days of high-level trade negotiations in Washington, DC, ended with the two sides in an apparent stalemate.

US Treasury Secretary Steven Mnuchin told CNBC the talks were ongoing and he was working on when to travel to Beijing.

Trump on Monday, also said he will meet Putin at the G20 summit in Osaka, Japan. The Kremlin said, however, that no such arrangement has been made for the June 28-29 gathering.

“There haven’t been any requests. There are also no agreements so far,” Kremlin spokesman Dmitry Peskov told the Interfax news agency.

US Secretary of State Mike Pompeo is expected to meet Putin and Russian Foreign Minister Sergey Lavrov on Tuesday in Sochi for the highest-level talks between Moscow and Washington in nearly a year.

Pompeo cancelled a visit to Moscow on Monday and stopped in Brussels instead to meet his counterparts from the UK, France and Germany about Iran.

Tensions between the US and Iran mounted last week, a year after Trump withdrew the US from the 2015 landmark nuclear deal. Iranian President Hassan Rouhani gave the remaining signatories 60 days to come up with a plan to shield his country from sanctions imposed by Trump after the US withdrew from the deal.

On Monday, European foreign ministers urged restraint amid fears of the tensions tipping them easily into armed conflict.

Hook said that Iran is expected to be on Pompeo and Putin’s agenda on Tuesday. They are also expected to push for progress on arms control, as well as the Venezuela crisis.