White House counsel Don McGahn will leave his job after the Senate votes on the confirmation of Brett Kavanaugh for the Supreme Court, President Donald Trump confirmed on Wednesday.

The development comes as legal risks to the President rise, following the conviction of his former campaign chairman Paul Manafort last week on fraud charges and his former personal lawyer Michael Cohen's guilty plea to charges of fraud and campaign finance violations.

McGahn "will be leaving his position in the fall, shortly after the confirmation (hopefully) of Judge Brett Kavanaugh to the United States Supreme Court," Trump said Wednesday. "I have worked with Don for a long time and truly appreciate his service!"

During his time as White House counsel, McGahn repeatedly butted heads with Trump and occupied a position rife with conflicts. He has met extensively with special counsel Robert Mueller's team in its investigation of Russian interference in the 2016 election, and is an important potential witness regarding whether Trump obstructed justice when he fired FBI director James Comey.

Because he's a witness in the Russia investigation, McGahn has had little involvement in the White House's response to the probe since at least August 2017, when lawyer Ty Cobb was brought into the West Wing to work directly with investigators. Lawyer Emmet Flood replaced Cobb earlier this year and could move into McGahn's job.

Flood is "super well-respected," White House press secretary Sarah Sanders said, adding that "there's not a plan locked in place at this point" for replacing McGahn. 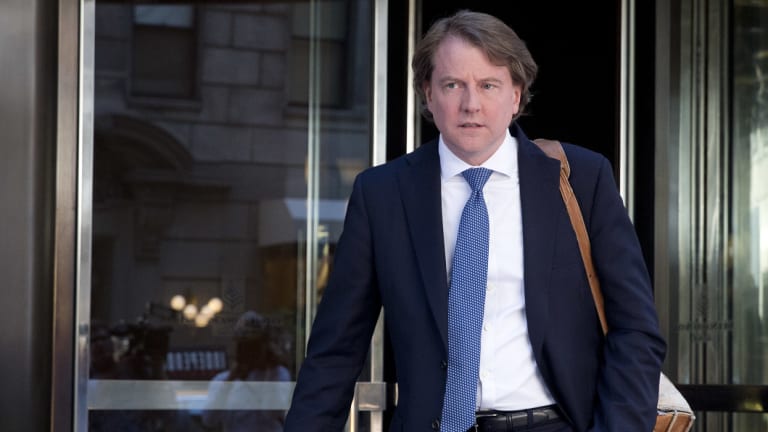 McGahn also came under fire earlier this year for his office's handling of a security clearance for former White House Staff Secretary Rob Porter, who was accused of domestic abuse by two ex-wives.

But McGahn has the respect of many conservatives outside the White House for shepherding Trump's judicial nominees through the Senate. Trump has already won the confirmation of 60 judges to the courts – including 33 district court judges, 26 appeals court judges and Supreme Court Justice Neil Gorsuch.

Senate Judiciary Chairman Chuck Grassley tweeted on Wednesday in response to Trump, "I hope it's not true McGahn is leaving WhiteHouse Counsel. U can't let that happen."

McGahn was thrust into the Russia investigation early in the administration. Then-acting Attorney-General Sally Yates approached McGahn when she wanted to warn the White House that then-national security adviser Michael Flynn could be compromised by the Russians.

Yates met with McGahn days after Trump's inauguration to tell him that the Justice Department was concerned that Flynn could be blackmailed because the Russians knew he had misled Vice President Mike Pence about his communications with the Russian ambassador. McGahn took the information from Yates and passed it on to Trump.

Yates said she remembered McGahn asking her in the meeting whether Flynn should be fired, to which she responded that wasn't her call.

He was also directed by Trump to try to stop Attorney-General Jeff Sessions from recusing himself from the Russia investigation, said a person familiar with the situation. Sessions ultimately decided to follow the advice of ethics officials, who said he shouldn't have any involvement in the investigation since he was a Trump campaign adviser.

The New York Times reported that McGahn threatened to quit after Trump ordered him to fire Mueller, which Trump later backed down from.