Trump says he told ‘very rich’ allies in Paris to pay up or go it alone as he complains about ‘ridiculously unfair’ trade imbalances with nations that get U.S. military aid

‘It is time that these very rich countries either pay the United States for its great military protection, or protect themselves,’ he wrote on Twitter.

Trump tweeted that ‘much was accomplished’ in his meetings tied to the centenary of the end of World War I. But the U.S. pays billions ‘protecting other countries, and we get nothing but Trade Deficits and Losses,’ he complained.

French President Emmanuel Macron played to his base during the American president’s visit, declaring that ‘patriotism is the exact opposite of nationalism’ and ‘nationalism is a betrayal of patriotism.’

Unlike past presidents, Trump sees the United States as an important standalone contrast to multilateral groups of nations like the United Nations and NATO. He has complained bitterly about America’s historical obligations to fund those international alliances, and has pushed allies to fund more of their own defense. 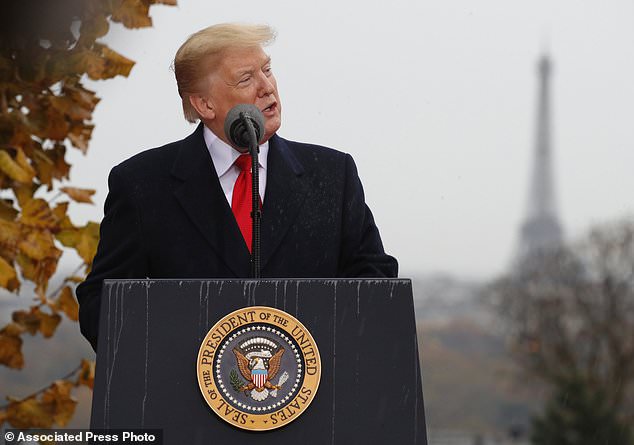 ‘It is time that these very rich countries either pay the United States for its great military protection, or protect themselves,’ the president wrote Monday morning on Twitter

His foreign policy revolves around trade as much as national security, and he uses the economic might of Washington to correct what he sees as a global playing field left tilted against America’s interests by his incompetent predecessors.

That left him largely on his own over the weekend – a man with few visible friends on the world stage.

Trump began his visit with a tweet slamming the French president’s call for a European defense force, arrived at events alone and spent much of his trip out of sight in the American ambassadors’ residence in central Paris. On Sunday, he listened as he was lectured on the dangers of nationalist isolation, and then he headed home just as the inaugural Paris Peace Summit was getting underway.

His France trip made clear that, nearly two years after taking office, Trump has dramatically upended decades of American foreign policy posture, shaking allies. That includes French President Emmanuel Macron, who on Sunday warned that the ‘ancient demons’ that caused World War I and millions of deaths were once again making headway.

Macron, who has been urging a re-embrace of multinational organizations and cooperation that have been shunned by Trump, delivered a barely veiled rebuke of Trumpism at the weekend’s centerpiece event: A gathering of dozens of leaders at the Tomb of the Unknown Soldier at the base of the Arc de Triomphe to mark the passage of a century since the guns fell silent in a global war that killed millions. 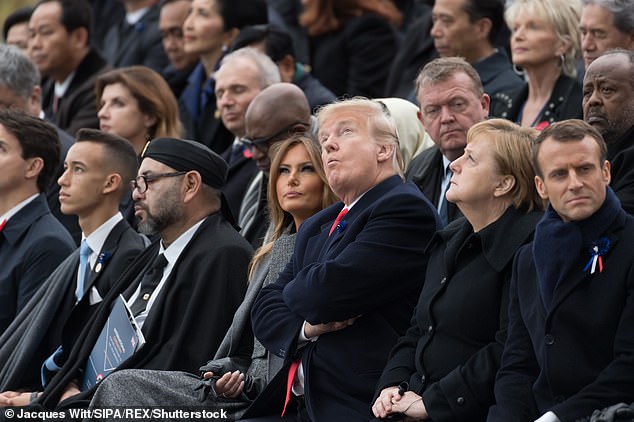 Trump and the first lady sat between Morocco’s King Mohammed VI and his son on one side, and German Chancellor Angela Merkel and French President Emmanuel Macron on the other 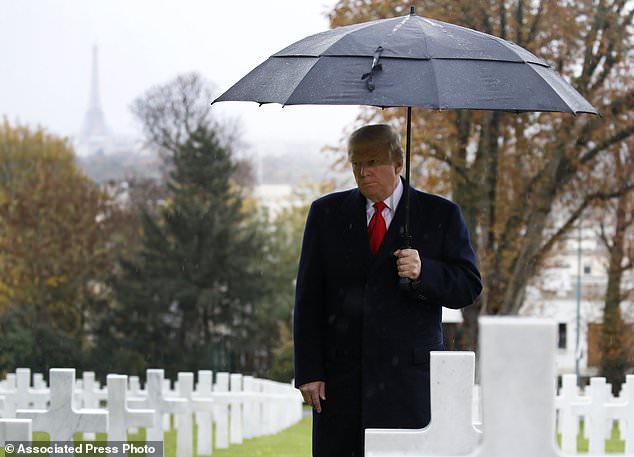 Trump stood alone during an American commemoration ceremony on Sunday at Suresnes American Cemetery near Paris, after missing a larger commemoration on Saturday when weather grounded his helicopter

With Trump and other leaders looking on, Macron took on the rising tide of populism in the United States and Europe and urged leaders not to turn their backs by turning inward.

After dismissing nationalism as a ‘betrayal of patriotism,’ Macron claimed that when nations put their interests first and decide ‘who cares about the others’ they ‘erase the most precious thing a nation can have … its moral values.’

After Trump was gone, German Chancellor Angela Merkel, who recently announced that she will not be seeking re-election, made an impassioned plea for global cooperation at the peace forum, saying World War I had ‘made clear what disastrous consequences a lack of compromise in politics and diplomacy can have.’

Trump, who has made clear that he has limited patience for broad, multilateral agreements, sat mostly stone-faced as he listened to Macron, who sees himself as Europe’s foil to the rising nationalist sentiment, which has taken hold in Hungary and Poland among other countries.

Trump did engage with his fellow leaders, attending a group welcome dinner hosted by Macron at the Musée d’Orsay on Saturday night and a lunch on Sunday. He also spent time with Macron on Saturday, when the two stressed their shared desire for more burden-sharing during a quick availability with reporters. 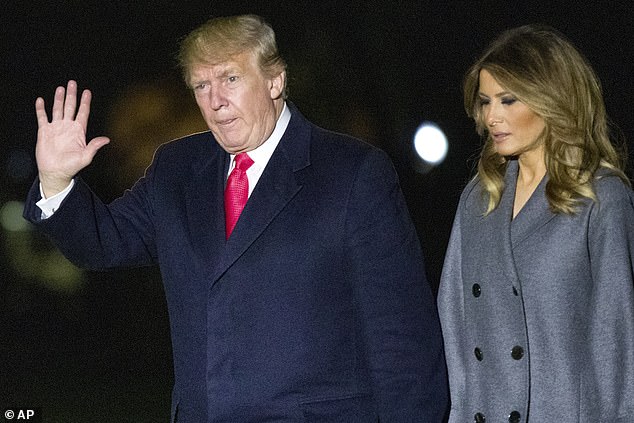 But Trump was terse during some of his private conversations with world leaders, according to people with direct knowledge of his visit. One of the people described the president as ‘grumpy.’ They spoke on condition of anonymity because they were not authorized to discuss private conversations.

The symbolism during Trump’s visit couldn’t have been more stark.

Trump was missing from one of the weekend’s most powerful images: A line of world leaders, walking shoulder to-shoulder in a somber, rain-soaked procession as the bells marking the exact moment that fighting ended – 11 a.m. on Nov. 11, 1918 – finished tolling.

The president and first lady Melania Trump had traveled to the commemoration separately – White House press secretary Sarah Huckabee Sanders cited security protocols – from the other dignitaries, who had traveled together by bus from the Élysée Palace.

As Trump’s motorcade was making its solo trip down the grand Champs-Élysées, which was closed to traffic, at least one topless woman breached tight security, running into the street and shouting ‘fake peace maker’ as the cars passed. She had slogans, including the words ‘Fake’ and ‘Peace,’ written on her chest.

Also traveling on his own was Russian President Vladimir Putin, who shook Trump’s hand, flashed him a thumbs-up sign and patted Trump’s arm as he arrived. Trump responded with a wide smile.

National security adviser John Bolton had said at one point that Putin and Trump would meet in Paris, but they will instead hold a formal sit-down later this month at a world leaders’ summit in Buenos Aires. A Kremlin official said later that U.S. and Russian officials decided to drop plans for the Paris meeting after French officials objected.

Trump, who ran on an ‘America First’ platform, has jarred European allies with his actions. He has slapped tariffs on the European Union, pulled the U.S. out of the landmark Paris Climate Accord and the Iran nuclear deal and suggested he might be willing to pull the U.S. out of NATO if member counties don’t significantly boost their defense spending.

Trump’s eagerness to get along with the Russian leader – in spite of Russia’s meddling in the 2016 election and numerous other aggressive moves in recent years – has alarmed those who view Russia as a growing threat.

Trump has also repeatedly branded himself a ‘nationalist,’ despite criticism from some that the term has negative connotations. At a news conference last week, Trump defended his use of the phrase. ‘You know what the word is? I love our country,’ he said, adding: ‘You have nationalists. You have globalists. I also love the world and I don’t mind helping the world, but we have to straighten out our country first. We have a lot of problems.’

But Trump did not broach the divide as he paid tribute Sunday to U.S. and allied soldiers killed in World War I during ‘a horrible, horrible war’ that marked America’s emergence as a world power.

‘We are gathered together at this hallowed resting place to pay tribute to the brave Americans who gave their last breath in that mighty struggle,’ Trump said at the Suresnes American Cemetery and Memorial in the suburbs of Paris, where more than 1,500 Americans who died in the war are buried.

‘It is our duty to preserve the civilization they defended and to protect the peace they so nobly gave their lives to secure one century ago,’ he said after spending a moment, standing alone amid the cemetery’s white crosses, holding a black umbrella.