‘Why I should I allow them to change the rules when I WON?’ Donald Trump slaps down debate commission plan to mute his microphone – so will he boycott next head-to-head with Biden?

President Donald Trump objected Thursday to the Commission on Presidential Debate making changes to the rules for his second and third face-offs against Democrat Joe Biden.

‘Why would I allow the Debate Commission to change the rules for the second and third Debates when I easily won last time?’ Trump tweeted Thursday afternoon as he traveled to his Bedminster, New Jersey resort for campaign events.

The Commission is thinking about letting moderator Steve Scully turn off the candidates’ microphones after the first debate was marked by interruptions and name-calling.

The two candidates will face each other next on October 15 in Miami for a town-hall style debate moderated by the C-SPAN host.

The rules of engagement will be different at that meeting, the Commission on Presidential Debates announced Wednesday, in an attempt to curb the chaos from Tuesday night’s debate, which was compared to a dumpster fire. 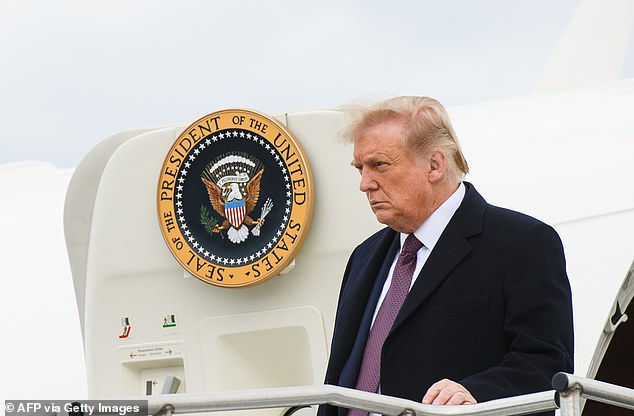 President Donald Trump tweeted Thursday, ‘Why would I allow the Debate Commission to change the rules for the second and third Debates when I easily won last time?’

The Trump campaign firmly came out against any rule changes for the second and third debate, following up Trump’s tweet with a press call where they suggested the Commission on Presidential Debates was biased in favor of Joe Biden 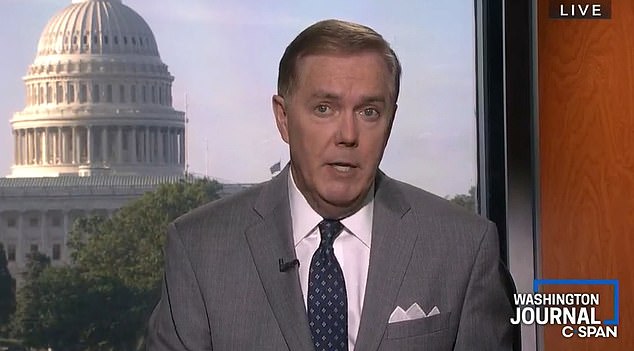 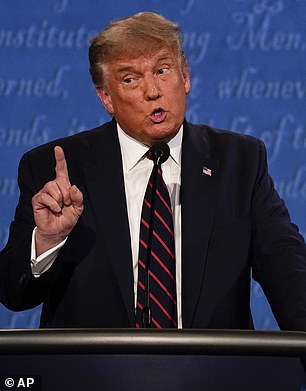 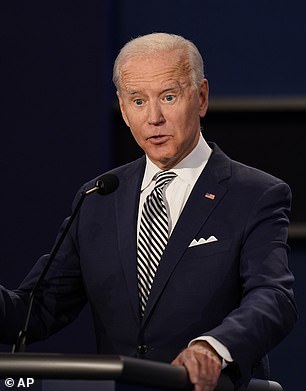 ‘THE FAIREST MAN IN D.C.’ FACES BIGGEST NIGHT OF HIS CAREER

Scully, 60, is the network’s senior executive producer and political editor, and for viewers, the host of Washington Journal, its morning call-in show.

Although it does not attract mass ratings it is vital viewing for political insiders trying to take the temperature of the nation, as well as a place for political figures to appear if they want to try to set the D.C. agenda.

Most of all it is TV’s only national call-in show on politics. Callers are screened by ideology with separate numbers for Republicans, Democrats and independents, and often express robust and unexpected views.

The Trump campaign’s belief it could win in the mid-West was partly based on disaffected former Obama supporters calling in to Washington Journal.

Scully is known for his calm approach, never expressing a personal view, and his ability to listen. Comedian John Oliver called him ‘the most patient man in television.’

He has been C-Span political editor since 1990, having worked in local television.

Scully’s political views are unknown but he did however volunteer for the Jimmy Carter campaign in 1976, aged 16, and worked for Joe Biden, as a mail room intern in 1978 and Ted Kennedy as a media intern in 1979 – both before he graduated college.

He has said he was brought up with a Republican father and Democratic mother and since becoming a journalist, has never been known to express a partisan view.

A devout Catholic father of four with wife Katie, he is the 14th of 16 children from Erie, PA – his parents had five sets of twins – and is on the board of two charities for Sudden Infant Death Syndrome, having lost a baby daughter in 1996.

The two-week window gives the commission some breathing room to consider their options.

One getting serious consideration is giving the moderator the ability to mute the president, according to reports.

Whatever the new rules are the campaigns will have no say in them.

The campaigns will be informed of the new rules but they will not be subject to negotiation, a source told CBS News.

Neither candidate nor their campaigns have commented on the possible changes.

It appears the initial rules will remain in place for the vice presidential debate in Salt Lake City on Tuesday between Mike Pence and Kamala Harris.

Chris Wallace, the Fox News host who moderated the first debate, said he feared not even muting Trump’s microphone would have stopped the president from talking.

‘As a practical matter, even if the president’s microphone had been shut, he still could have continued to interrupt, and it might well have been picked up on Biden’s microphone, and it still would have disrupted the proceedings in the hall,’ he told The New York Times.

And he worried about how supporters of the candidates would react if a moderator cut their microphone.

‘People have to remember, and too many people forget, both of these candidates have the support of tens of millions of Americans,’ he said.

Scully, in an interview with Erie News Now conducted just before the revelation of a possible rule change had said that he expected the town hall format to be like his Washington Journal show, which combines interviews and phone-in segments – and joked about the lack of a mute button.

‘The only difference is that I have the ability to hit the mute button, so I’m able to do that on the Washington Journal, not so much in a debate,’ he said.

But Scully being equipped with a mute button poses a number of technical challenges from a television production standpoint.

Another option under consideration is to penalize an interrupting candidate by forcing them to yield more time back to the opponent.

The next debate is the vice presidential one on October 7 in Salt Lake City.

The next presidential one in Miami will feature undecided voters asking questions of the candidates. There will be only 15-20 people in the hall asking questions due to coronavirus restrictions.

The third and final debate will be in Nashville on October 22 and moderated by Kristen Welker of NBC News. It will have the same format as Tuesday night’s debate.

Wallace’s advice to Scully and Welker: ‘If either man goes down this road, I hope you’ll be quicker to realize what’s going on than I was. I didn’t have that advance warning.’

The Commission on Presidential Debates said Wednesday it was ‘clear that additional structure should be added to the format of the remaining debates to ensure a more orderly discussion of the issues.’

Currently, each candidate is given the opportunity to speak for two minutes – supposedly uninterrupted – in response to a moderator’s question, before being allowed to respond to one another.

Trump routinely flouted those rules on Tuesday, despite agreeing abide by them before the showdown commenced.

The changes will be announced ‘shortly,’ the commission said, declining to comment further.

In his first remarks after the crazy evening, Biden described Trump as a ‘national embarrassment’ and said he hopes the format is changed to the president’s mic can be turned off when needed.

‘I can understand it. I kind of thought at one point, and maybe I shouldn’t say this, but the president of the United States conducting himself the way he did, I think it was just a national embarrassment,’ Biden said Wednesday at a stop on his train tour of Ohio and Pennsylvania.

Biden confirmed he will participate in the following two debates and floated the idea of using technology to rein in Trump.

‘I just hope there’s a way in which the debate commission can control the ability of us to answer the question without interruption,’ he said, suggesting his microphone be muted if the president interrupts him.

President Trump complained about Wallace not allowing him to land a glove on Biden during Tuesday’s debate.

‘I said “Sleepy Joe, name one law enforcement group that supports [you]” and then Chris Wallace says, “Don’t do that.” Can you believe? This guy,’ Trump said.

The president also blamed Wallace for not being able to fully deploy an attack Biden’s only living son, Hunter, who Trump smacked for his foreign business dealings.

‘Protected by Chris,’ Trump sniped. ‘”We don’t want to discuss that,”‘ he said, mimicking the moderator. ‘Oh really Chris? It’s so sad.’

The president lumped Wallace in with the rest of the mainstream media during his Wednesday remarks.

‘The liberal media is upset that I took the fight to Biden and exposed his dangerous agenda,’ Trump said.

The president, meanwhile, initially indicated he would be at the next presidential debate.

‘I would like to,’ he told reporters at the White House Wednesday before he left for Minnesota. ‘We won the debate by almost every poll that I saw.’

He added of Biden: ‘I don’t mind debating him. I hear that he wants to get out of the debates. I don’t know. That’s up to him.’

Trump made the same claim at his Wednesday night rally in Duluth, Minnesota.

‘Now I understand he’s cancelling the debates,’ Trump said. ‘I don’t think that’s going to be a good look for him.’

The first presidential debate barely kicked off Tuesday evening before it devolved into a chaotic mess as the two candidates began name calling, fighting and cross-talking – ignoring pleas from Wallace to stand down.

‘Would you shut up, man?,’ a visibly exasperated Biden said about 20 minutes into the debate after Trump interrupted him.

Trump relentlessly went after Biden – frequently cutting him off mid-sentence.

Biden, determined not to get out-muscled and mindful of Trump’s slashing 2016 attacks on Hillary Clinton, came armed with his own insults – branding Trump a ‘liar’ and a ‘clown’ and also ‘a racist’ – but sometimes merely sat back and smiled amid Trump’s own charges.

During one exchange, Biden told the president to ‘shut up.’ Later he said ‘you’re the worst president that America has ever had.’

Trump, for his part, brought up Biden’s son Hunter’s past cocaine use and inaccurately accused him of getting a dishonorable discharge from the Navy. He called his rival a ‘socialist,’ and repeatedly tried to tar him with ‘radical’ elements like Antifa.

Wallace repeatedly lectured Trump, telling him ‘I’m the moderator of this debate’ at one point. His efforts were mostly fruitless.

In Ipsos polling down with FiveThirtyEight.com, for example, only about one-third of those surveyed called Trump’s performance ‘somewhat good’ or ‘very good,’ while 50 per cent said it was ‘very poor.’

On the other hand, 60 per cent of those same respondents said Biden performed well.