La Malbaie, Quebec: President Donald Trump threw the G7 summit into disarray on Saturday, tweeting that Canadian Prime Minister Justin Trudeau is "dishonest & weak" and that the US was pulling back its endorsement of the group's communique in part because of what he called Trudeau's "false statements" at a news conference. 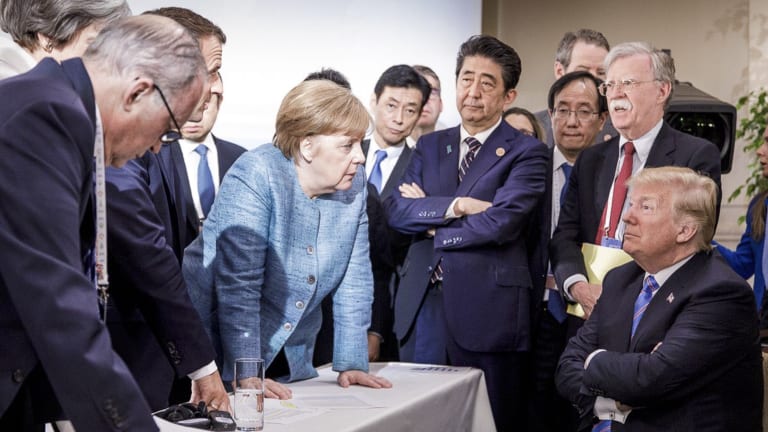 In an extraordinary set of tweets aboard Air Force One, on its way to Singapore for next week's summit with North Korea's Kim Jong-un, Trump lashed out just as Canada released the G7's official communique. Its statement took a generally positive view of the leaders' positions on trade matters while acknowledging tensions with the US.

A few hours earlier, Trudeau had told reporters that all seven leaders had come together to sign the joint declaration.

Trump tweeted: "Based on Justin's false statements at his news conference, and the fact that Canada is charging massive Tariffs to our US farmers, workers and companies, I have instructed our US Reps not to endorse the Communique as we look at Tariffs on automobiles flooding the US Market!"

He followed up by tweeting: "PM Justin Trudeau of Canada acted so meek and mild during our (at)G7 meetings only to give a news conference after I left saying that, "US Tariffs were kind of insulting" and he "will not be pushed around." Very dishonest & weak. Our Tariffs are in response to his of 270% on dairy!"

In a statement, a spokesman for Trudeau did not address Trump's insults. "We are focused on everything we accomplished here at the (hash)G7 summit," spokesman Cameron Ahmad said. "The Prime Minister said nothing he hasn't said before – both in public, and in private conversations with the President." 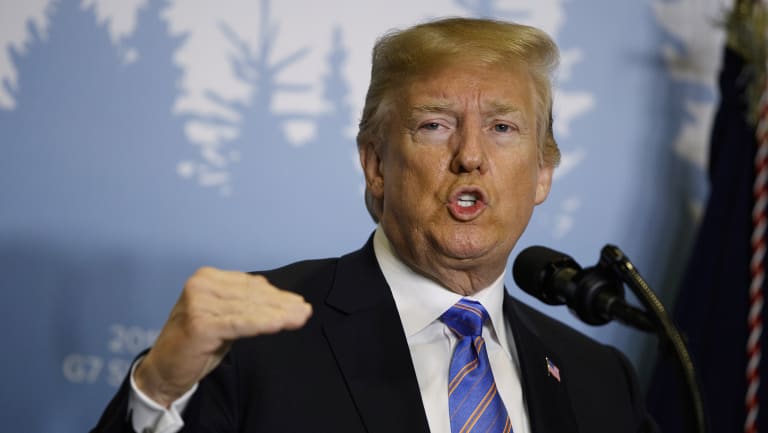 President Donald Trump speaks during a news conference at the G7.

As he exited the world summit, Trump had delivered a stark warning to America's trading partners not to counter his decision to impose tariffs on steel and aluminum imports. But the summit host, Trudeau, whose nation was among those singled out by Trump, pushed back and said he would not hesitate to retaliate against his neighbour to the south.

"If they retaliate, they're making a mistake," Trump declared before departing the annual Group of Seven summit, which includes Britain, Italy, France, Germany and Japan.

Trudeau later said he reiterated to Trump that tariffs will harm industries and workers on both sides of the US-Canada border. He said unleashing retaliatory measures "is not something I relish doing" but that he wouldn't hesitate to do so because "I will always protect Canadian workers and Canadian interests." 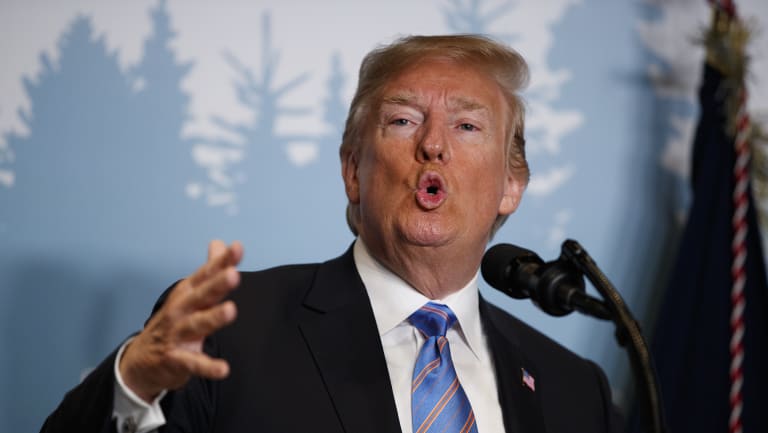 President Donald Trump speaks during a news conference at the G7.

Despite the sharp differences, Trudeau said all seven leaders had come together to sign a joint declaration despite having "some strong, firm conversations on trade, and specifically on American tariffs."

Trump's abbreviated stay at this Quebec resort saw him continuing the same type of tough talk on trade as when he departed the White House, when he accused Trudeau of being "indignant."

The summit came during an ongoing trade dispute with China and served as a precursor to the unprecedented meeting with Kim, in which Trump has sought to extend a hand to the Asian autocrat who has long bedeviled the international order.

"His message from Quebec to Singapore is that he is going to meld the industrial democracies to his will – and bring back Russia," said Steve Bannon, Trump's former campaign and White House adviser. Bannon said China is "now on notice that Trump will not back down from even allies' complaints in his goal of 'America First."' 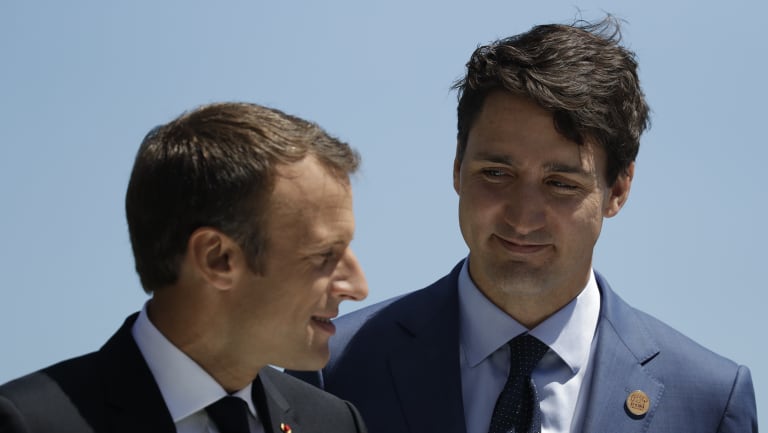 Speaking on Saturday during a rare solo news conference, Trump said he pressed for the G-7 countries to eliminate all tariffs, trade barriers and subsidies in their trading practices. He reiterated his longstanding view that the US has been taken advantage of in global trade, adding, "We're like the piggy bank that everybody's robbing and that ends."

He said US farmers had been harmed by tariffs and other barriers and warned that US trading partners would need to provide him with more favourable terms. "It's going to stop or we'll stop trading with them," he said.

Trump cited progress on reaching an agreement on the North American Free Trade Agreement with Canada and Mexico, saying the final outcome would lead either to an improved trade deal or separate pacts with the two US neighbours. Trump said he was discussing two types of sunset provisions in which any of the countries could leave the deal. A Canadian official said the leaders discussed accelerating the pace of the talks. 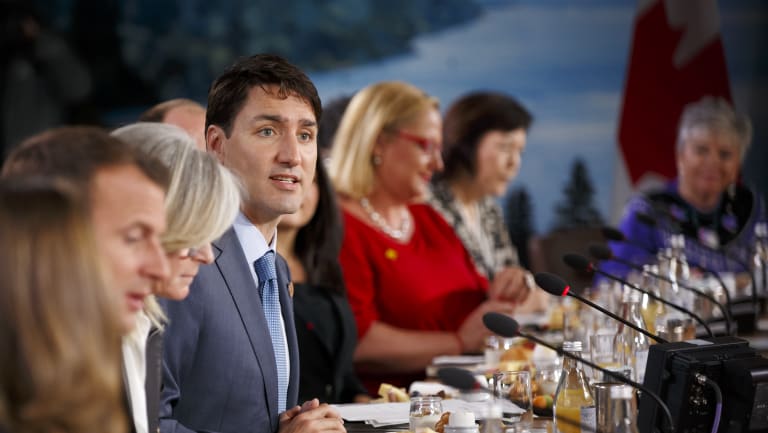 But Trudeau objected strenuously to a sunset clause of any length. "If you put an expiry date on any trade deal, that's not a trade deal. That's our unequivocal position," he said.

Prior to his arrival on Friday, the president injected additional controversy by suggesting that the G7 offer a seat at the table to Russia, which was ousted from the group in 2014. Trump said on Saturday that re-admitting Russia to the elite club would be "an asset," telling reporters, "We're looking for peace in the world." Trump said he had not spoken with Russian President Vladimir Putin in a while.

Discussing Russia's absence, Trump made the vague comment that "something happened a while ago where Russia is no longer in. I think it would be an asset to have Russia back in." In fact, Russia was expelled from what was then the G8 after it invaded and annexed Crimea and for its support for pro-Russia separatists in Ukraine.

Trump placed the blame on his predecessor, President Barack Obama. "He was the one who let Crimea get away – that was during his administration," he said, adding: "Obama can say all he wants, but he allowed Russia to take Crimea. I may have had a much different attitude."

It was not clear what Trump thought Obama should have done to prevent Putin from sending in Russian troops to seize the Black Sea peninsula from neighbouring Ukraine.

Trudeau said he told Trump that readmitting Russia "is not something that we are even remotely looking at at this time."

Trump's recent moves, building on 18 months of nationalist policy-making, left him out of step with the globally minded organisation and prompted speculation that the group could fracture into something more like the "G-6 plus one."

A key question was whether the seven countries could agree on a joint statement of priorities at the conclusion of the meeting. Macron said Thursday on Twitter, "The American President may not mind being isolated, but neither do we mind signing a 6 country agreement if need be." Trump said Friday he thinks the group will produce a joint statement.

In public, Trump bantered easily with his fellow leaders, but the meeting came at a tense moment in the relationships, with allies steaming over Trump's new tariffs on imported steel and aluminum from Canada, Mexico and the European Union.

Leading up to the meetings, Trump, Trudeau and French President Emmanuel Macron had suggested the potential for a tough tone, though they were cordial in face- to-face meetings.

Alluding to the tensions as he sat with Macron on Friday, Trump said: "We've had, really, a very good relationship, very special. A lot of people wrote a couple of things that weren't quite true. A little bit accurate, perhaps. We have a little test every once in a while when it comes to trade."

With Trudeau, Trump joked that "Justin has agreed to cut all tariffs and all trade barriers between Canada and the United States."

Macron said he and Trump had "open and direct" discussions, adding that he thought there was a way to get a "win-win" outcome on trade. Details remained unclear.