Washington: US President Donald Trump, grappling with a torrent of criticism over his performance at a Helsinki summit with Russian President Vladimir Putin, said he misspoke at their joint news conference, marking a rare reversal from comments just a day earlier.

Even so, Trump added that, while he accepts the conclusion by US intelligence agencies that Russia interfered in the US presidential election, the meddling "could be other people also".

Trump has come under unprecedented criticism from Democrats and Republicans for statements he made in Helsinki that sided with Putin over the US intelligence community.

Standing alongside Putin at the news conference, Trump was asked if he believed US intelligence agencies' conclusions on election meddling or Putin's claims that Russia was not to blame.

Trump said he was not convinced it was Moscow.

"My people came to me… and some others, they said they think it's Russia," Trump said. "I have President Putin, he just said it's not Russia. I will say this, I don't see any reason why it would be."

He added that Putin "was extremely strong and powerful in his denial".

On Tuesday, after he arrived back in the US, Trump told reporters at the White House that he misspoke at the summit.

Reading from a prepared statement, he said he meant to say he didn't see any reason why it wouldn't be Russia.

Trump said he had been confused by the extreme reaction to his comments so he reviewed the press conference transcripts and a clip of the answer he gave, and realised he needed to clarify his statement.

"The sentence should have been… 'I don't see any reason why it wouldn't be Russia'. Sort of a double negative. So you can put that in, and I think that probably clarifies things," he said. 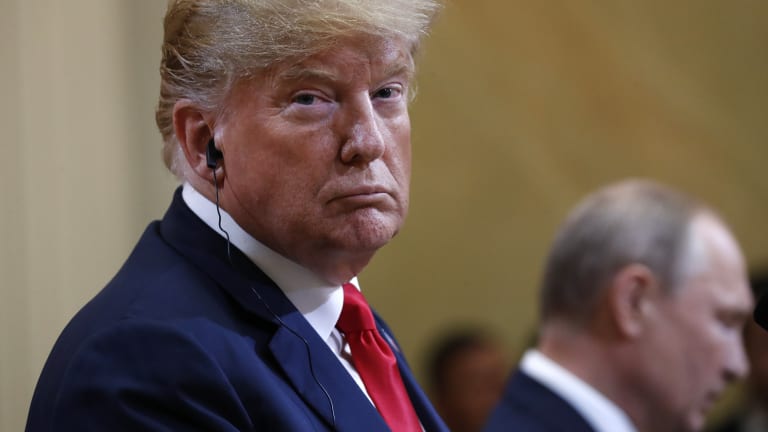 Donald Trump said he misspoke during his widely-criticised press conference with Vladimir Putin.

Observers immediately questioned Trump's clarification given that the President doubled down on his comments about accepting Putin's denials in interviews with Fox News after the press conference. He had also derided the criticism as "fake news".

On Tuesday, Trump again stressed that he had "full faith" in the US intelligence community and accepted their assessment that Russia had, unquestionably, meddled in the presidential election.

But, he added, Russian actions had no impact on the outcome of the vote and the administration would work aggressively to protect the November 2018 congressional elections.

"I've said this many times," Trump said. "I accept our intelligence community's conclusion that Russia's meddling in the 2016 election took place. Could be other people also. A lot of people out there."

Trump said the summit with Putin still "was our most successful visit" on his European trip.

Several Republicans said they would consider new legislation to sanction Russia for future election meddling, after Trump declined an opportunity to publicly warn Putin against such interference.

Senate Majority Leader Mitch McConnell said he wouldn't critique Trump's appearance with Putin. But he said there is broad understanding in both parties about the threat posed by Russia and warned of more sanctions if the Kremlin attempts to meddle in any future election, including the midterms coming up in November.

"The Russians need to know there are a lot of us who fully understand what happened in 2016 and it better not happen again in 2018," the Kentucky Republican said on Tuesday.  at the Capitol.