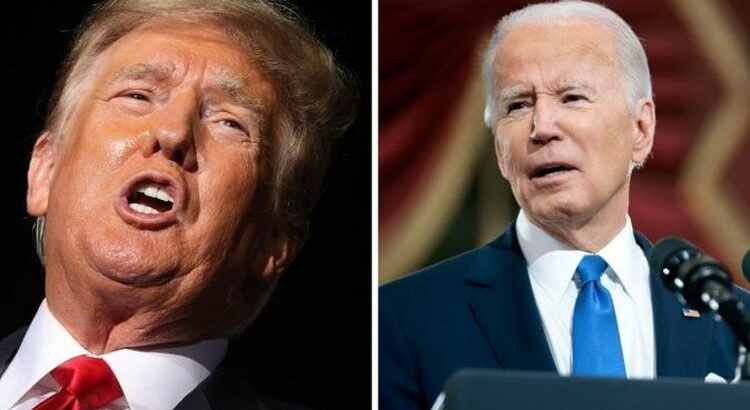 Yesterday, Joe Biden claimed his predecessor Donald Trump held a “dagger to the throat of America” and said that democracy faced an existential threat, as the US marked a year since the January 6 Capitol riot. The US President was addressing the nation on the anniversary of Mr Trump’s supporters storming the Capitol building in an attempt to stop Congress confirming his election defeat. Mr Biden was scathing of the Republican, stating: “For the first time in our history, the President had not just lost an election.

“He tried to prevent the peaceful transfer of power as a violent mob reached the Capitol. But they failed.”

President Biden then warned that American democracy still faced its biggest threat since the Civil War.

He said: “At this moment we must decide: what kind of nation we are going to be?

“The lies that drove the anger and madness we saw in this place, they have not abated.”

Mr Trump spent last summer delivering rallies to his base in which he continued to peddle the false narrative that the 2020 election was fraudulent and stolen.

His allies are now scheduling events and raising money for initiatives that are intended to make the former President an influence in the US’s midterm elections.

US political expert Prof Grover claimed that Mr Trump is likely to be setting the stage for another run at the presidency in 2024, and argued that the former business tycoon is vengeful.

He said: “Trump still wields tremendous power, and the thing about some secretly not wanting him to run again, that makes sense to me when the party needs to move on.

“The party needs to get younger, so he’s preventing that.

“I think that Trump is inhibiting that process because he’s there, he wants the ego gratification, he wants revenge.

Last year’s deadly event in Washington DC was the worst attack on the Capitol since it was burned by British forces in 1814.

Yet Mr Trump continues to push the ‘big lie’ and Prof Grover believes that if he were to run for office in 2024, it would be the “centrepiece” of his campaign.

The academic added: “I think he would build [a 2024 election campaign] around the ‘big lie’, the January 6 narrative.

“I think he would be vengeful.

“He’s pretty much a ‘what you see is what you get’ guy ‒ he acts very vengeful, he certainly speaks that way.

“I think that ‘Stop the Steal’ would be the centrepiece of his campaign and that feeling among his base that he has been cheated, and that they have not been heard is still really powerful.

“He’s giving a voice to them.”

Mr Trump had originally planned to hold a press conference from his Florida home yesterday evening but cancelled after Republicans and conservative allies worried it would cause more harm to the party’s reputation.

The enigmatic former President did however issue a number of furious statements perpetuating the ‘big lie’.

Without mentioning the violence that occured, Mr Trump wrote: “They got away with something and it is leading this country to destruction.”