The Kremlin is says that President Trump and President Putin will sit down for talks and a date and place will be announced on Thursday by Moscow and Washington.

An aide to the Kremlin, Yuri Ushakov, suggested that the meeting could happen independently of President Trump’s trip next month to Europe, saying according to Reuters that it would require weeks of preparation.

That could also mean that the talk would take place at the tail end of the president’s voyage abroad. Russian state media previously said it could be July 15 in Austria.

Helsinki was the more likely choice, according to Politico. The news publication also said that it would take place at the back end of Trump’s foreign trip. 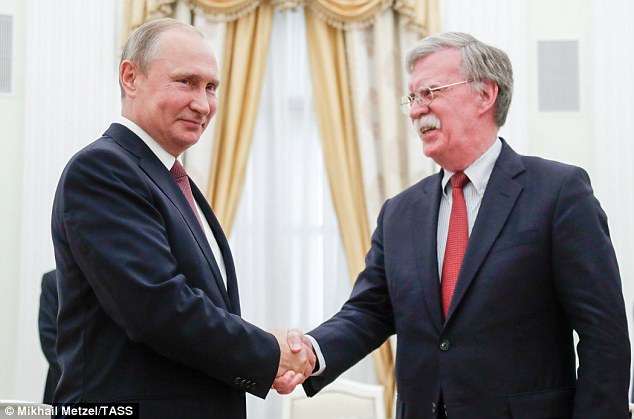 The Kremlin is says that President Trump and President Putin will sit down for talks and a date and place will be announced by Moscow and Washington on Thursday. The announcement came as U.S. National Security Adviser John Bolton was in Moscow meeting with Vladimir Putin

All that Ushakov, a foreign affairs adviser to Putin, would reveal is that the destination would be one that’s foreign.

He told reporters it will be ‘very convenient for both us and the U.S. side’ without disclosing the exact location.

The Kremlin announcement came as U.S. National Security Adviser John Bolton was in Moscow meeting with Vladimir Putin. The White House confirmed Wednesday that they were discussing a possible summit.

A spokesperson for the National Security Council declined to comment on the Kremlin aide’s claims that a deal had already been brooked, as did senior Trump aide Larry Kudlow.

‘We’ll wait for ambassador Bolton to come home and report and see where all that leads,’ Kudlow told DailyMail.com. ‘I can’t make any predictions.’

Over the weekend, Secretary of State Mike Pompeo said a meeting between Donald Trump and Vladimir Putin would be helpful to the countries’ relations, in spite of a U.S. assessment that Russia is trying to meddle in the mid-term elections.

The top U.S. diplomat told CNN, ‘The Russians, unlike the Europeans, don’t share our value set.’

However, he said a conversation with Russia is one ‘worth having’ so that the two nations can try to put their relationship back on track.

‘Whether it’s the battlefield in Syria, the situation in Ukraine, the Russians’ active measures,’ Pompeo said. ‘I am sure there are many topics that President Trump and President Putin will discuss and each of them is important to trying to put the relationship back in place with a common set of understandings.’ 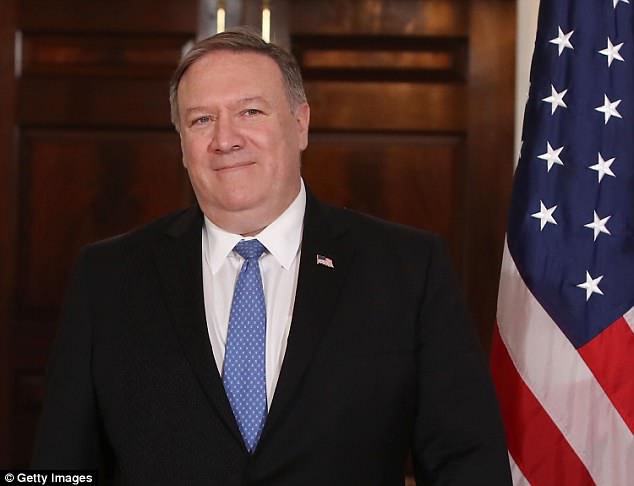 Secretary of State Mike Pompeo says a meeting between Donald Trump and Vladimir Putin next month in Europe would be helpful to the countries’ relations, in spite of a U.S. assessment that Russia is trying to meddle in the mid-term elections 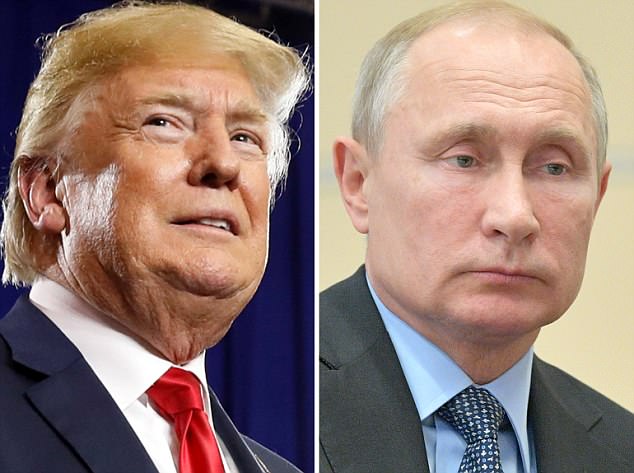 Russia’s interference in the 2016 election has been a sore spot for the president who has campaign associates who been probed in response to allegations that they were in on it.

The U.S. intelligence community has repeatedly warned that the November elections are ripe for additional attempts at disruption. Still, Trump has said he believes it would be better for the U.S. and sanctioned-nation to have a dialogue.

Trump implied that he believes that he will not have the same problems.

Director of National Intelligence Dan Coats said this month, however, that it’s his assessment that Russia is ‘attempting to influence the midterm elections in the United States in November as well as divide the transatlantic alliance.’

‘These Russian actions are purposeful and premeditated and they represent an all-out assault, by Vladimir Putin, on the rule of law, Western ideals and democratic norms,’ he told the Atlantic Council.

As CIA director in January, Pompeo also concluded, ‘The Russians have been at this a long time, and I fully expect they’ll continue to be at it.’

‘We will push back in a way that is sufficiently robust, that the impact they have on our election won’t be great,’ he told the BBC.

In an interview published Tuesday, Pompeo, now the secretary of state, told CNN that ‘Trump agrees Russia interfering in our election is something they simply cannot do’ and he does not believe the president would take ‘any umbrage with that.’

But he said, ‘To say there is a single issue that has caused there to not to be a warm relationship between the two countries is a misnomer.’

The administration is gearing has making moves for Trump and Putin to meet in July while the U.S. president is traveling Europe.

If the conversation occurs, it is likely to take place on July 15 or 16 in Vienna.

The Kremlin was not ready on Sunday to confirm reports that it would be July 15 that have circulating in Austria. And a White House official would only say that it was possible the meeting would occur after President Trump’s two-day trip to Scotland.

Pompeo has indicated in recent interviews, however, that the face-to-face talk would take place, without providing the exact details.

Trump’s top national security adviser John Bolton also laid the groundwork this week for a possible U.S.-Russia summit. He’s making a trip to Moscow, where he’ll be met with questions about how the U.S. is handling the civil war in Syria. 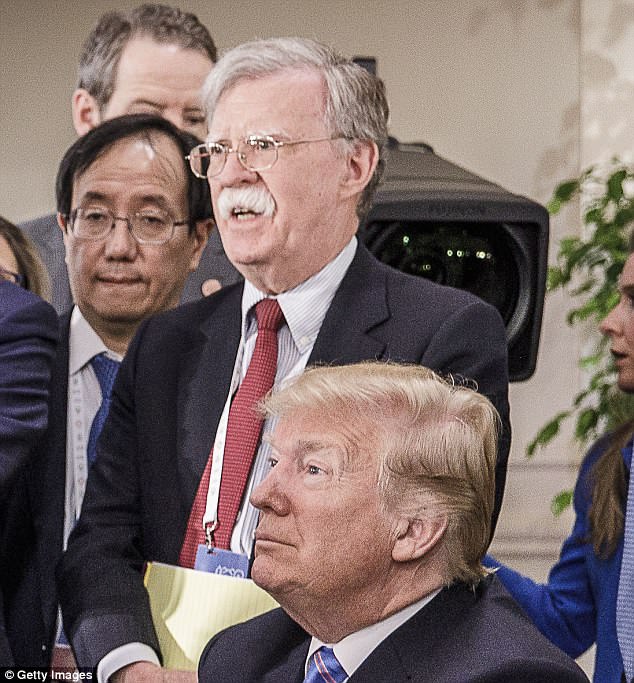 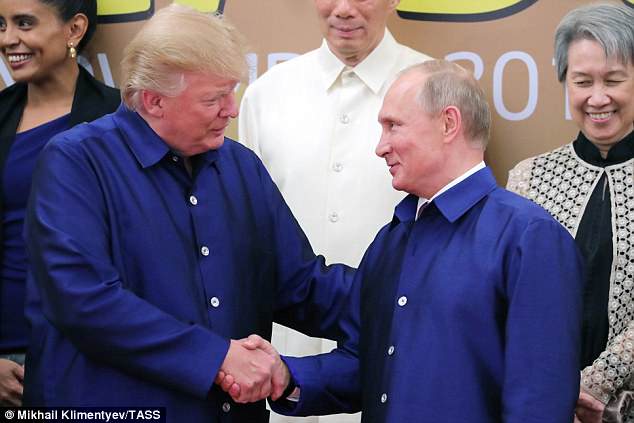 Bolton spokesman Garrett Marquis first mentioned the likelihood of a Russia journey last week in a tweet, saying he would ‘travel to Moscow’ after stops in London and Rome ‘to discuss a potential meeting between Presidents Trump and Putin.’

At the time, Putin spokesman Dmitry Peskov deflected questions about whether the two leaders would meet when Trump travels to Europe the week after next for a NATO summit.

‘We have nothing to say yet, and if and when we are ready we will make the relevant statement,’ Peskov said then.

Washington-Moscow ties have been strained by the special counsel Russia probe into election meddling and alleged Trump campaign collusion. Trump added stress when he pulled out of the Obama-era Iran nuclear deal.

The U.S. has also been streadfast in its condemnation of the Kremlin for a poisoning attack of a former Russian spy in the United Kingdom. 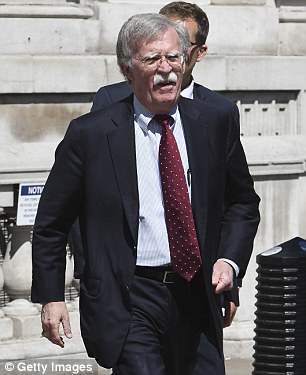 The last Trump-Putin meeting was a brief encounter in November 2017 during an APEC leaders summit in Vietnam.

But Pompeo said in an interview broadcast Saturday that he expects Bolton’s visit to bear fruit in the form of a bilateral summit.

‘I think it’s likely President Trump will be meeting with his counterpart in the not-too-distant future following that meeting, Pompeo said in an interview with conservative talk radio host Hugh Hewitt.

Pompeo said the U.S. was ‘trying to find places where we have overlapping interests’ with Russia, ‘but protecting American interest where we do not.’

Just prior to the interview, Russian Foreign Minister Sergey Lavrov emphasized that Moscow was ‘ready for contacts’ with Washington, and also said any agreement ‘on a high-level meeting’ would be announced in advance of it. 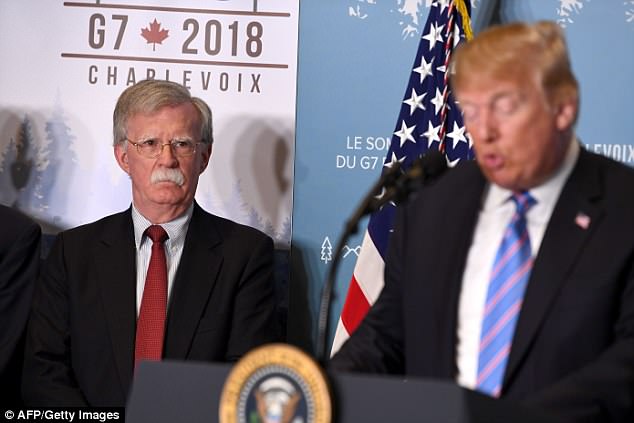 National Security Advisor John Bolton is pictured listening to Trump as he spoke to reporters on June 9, 2018, during the G7 Summit in La Malbaie, Quebec, Canada 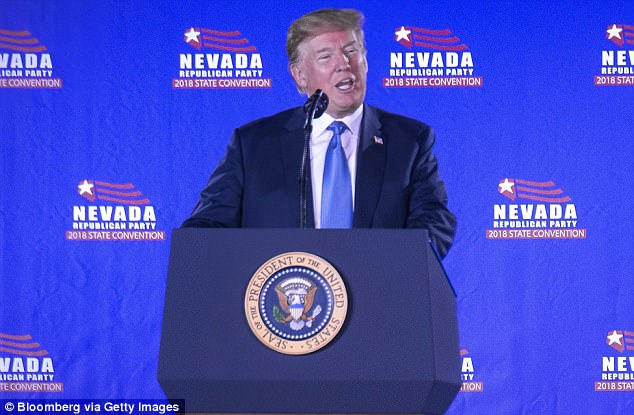 Trump has claimed that ‘nobody has been tougher on Russia,’ and he may have a chance to demonstrate next month that he’s willing to push back against the nation’s autocrat 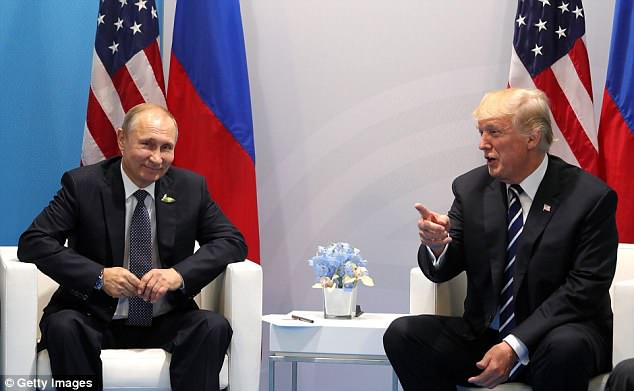 Trump and Putin hold a closely watched bilateral meeting on the sidelines of the G20 summit in Hamburg, Germany, on July 7, 2017

Trump and Putin discussed a face-to-face meeting in March, when Trump called the Russian leader to congratulate him on his re-election. Both the White House and Kremlin revealed that Trump had invited Putin to visit the White House.

That raised eyebrows among Democrats who have long suggested a cozy relationship between the two men led to Trump’s election victory in 2016.

Trump said June 15 during an unannounced gaggle with reporters outside the White House that ‘it’s possible’ he could sit down for a Putin summit in July, and ‘it’s much better if we get along with them than if we don’t.’

He was responding to questions about his assertion that Putin’s government should be re-admitted to the G-7 group of nations, which was known as the G-8 before Russia sent troops into Crimea in 2014 and seized the Black Sea peninsula from neighboring Ukraine.

Trump blamed his predecessor, Barack Obama, for that turn of events.

‘Putin didn’t respect President Obama,’ he said. ‘President Obama lost Crimea, just so you understand. This was long before I got there.’

Austria has offered to host a Trump-Putin summit, which a White House official said Monday could happen after the president’s July trip is over.

In addition to the two-day NATO summit in Brussels, he is scheduled to spend a day in London and two more in Scotland, where his real estate management company owns two storied golf courses.

That would make July 16 the likely date for the Russian summit.