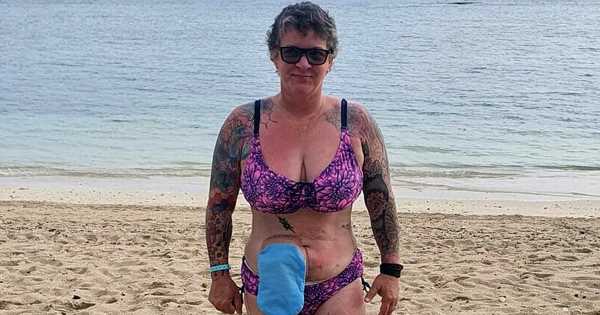 A Brit holidaymaker says she was left "horrified" after she had to change her stoma bag on a plane which she claims was "leaking urine" from the toilet.

Denise Hart, 53, was flying back to Manchester when she says passengers were plagued with an uncomfortable stench towards the end of their flight.

Denise, who is recovering from cancer, jetted off to Cuba with her partner Kevin on June 2 and complimented TUI over their service during their holiday.

But the plane journey turned into a nightmare when she claims she noticed "urine leaking from the toilet at the back of the aircraft."

However, TUI said they didn't identify any leaks before or after the flight and believe that what Denise saw was water.

Denise felt she had no choice but to "expose" her "intestine" while changing her surgical bag on June 9.

The traveller said she was "very sad at the standard of the cleanliness " and said the incident took place "next to the food preparation area."

Since returning home, she has shared her ordeal while recovering from a life-changing operation.

Denise told the Daily Star: "I was very unhappy and worried about the unsanitary conditions as I had to expose my intestine in the toilet that was already excessively unclean.

"I did not want to pick up any germs after a long-awaited holiday due to the pandemic then my cancer diagnosis and treatments of radiotherapy sessions, one platinum infusion along with three weeks of chemotherapy tablets and that went on for five months for bowel cancer.

"This was followed by an operation to remove the cancer and have a loop ileostomy for eight months until my reversal operation this Monday just gone.

"The unsanitary conditions could have infected me which would have delayed my operation to remove the stoma."

She claims things then went from bad to worse after they had to sit with the stench for an hour once they had landed back in Manchester, because the aircraft wasn't allocated a parking bay.

Denise alleged that the passengers had no ground crew to take them off the plane.

But she said she had enjoyed her holiday experience despite being hit by a tropical storm for two days and suffering from plane delays.

She added that the staff were "very friendly" during her time away and even complimented the captain for his "honest, informative and funny" remarks.

But she says this was all sadly tainted by the ride home.

Speaking about the alleged leak, she added: "It did impact the experience as we had waited for this holiday after so much pain and suffering from the treatments but Kevin my partner and my family's support helped us get through our difficult times.

"We were both saddened and angry that I was exposed to the risk of infection."

The holidaymaker said she alerted staff about the issue but they told her it was "water" despite the "extremely smelly" conditions.

She claimed staff were unable to keep the area clean as they had to continue to serve passengers on board.

The travel company said Denise can file a complaint through their website if she wants to.

A spokesperson for TUI said: "We’re pleased to hear Ms Hart enjoyed her holiday to Cuba with us.

Have you had a holiday from hell? Share your story at [email protected]

"Our engineering and maintenance teams have investigated Ms Heart’s claims and we can confirm there were no leaks recorded on this aircraft either before or after the flight.

"This was also confirmed at the time by our crew onboard.

"We advise Ms Heart to contact us directly if she wishes to investigate this further."