Ankara and Doha have developed solid ties during testing times and the countries’ leaders enjoy a strong relationship. 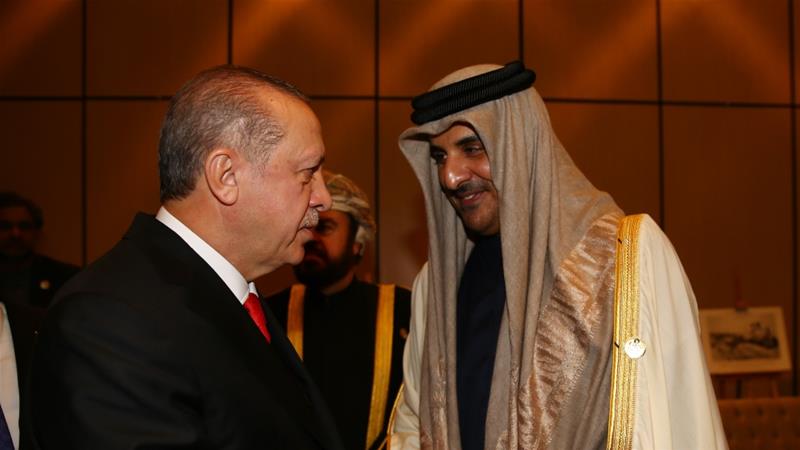 Ankara and Doha are close regional allies, having developed solid ties during testing times, while the countries’ leaders enjoy a strong personal relationship. The two governments have seen eye-to-eye on a range of regional foreign policy issues in recent years, such as the Syrian war, the plight of the Palestinian people, and Egypt’s 2013 coup.

Economic relations between the two sides have been robust, particularly since the Gulf crisis erupted in 2017, when Saudi Arabia, the United Arab Emirates, Bahrain and Egypt imposed a blockade on Qatar and severed diplomatic relations.

The previous year, when hundreds of people were killed in a failed coup in Turkey, the Qatari emir was the first world leader to call Erdogan and express support to his government.

Meanwhile, Qatar has issued statements of support for Turkey’s military operations in northern Syria in recent years, when Ankara attacked Kurdish fighters it considers “terrorists” to drive them away from its southern border.

Turkey’s relations with Egypt, Saudi Arabia, and UAE have also been shaky in the last few years because of foreign policy differences in the region – particularly in relation to Syria, Egypt and Palestine – areas where Ankara and Doha have pursued similar policies.

Ankara’s ties with Saudi Arabia came under intense strain after the killing of journalist Jamal Khashoggi in the Saudi consulate in Istanbul by a team of Saudi agents last year.

‘Isolation of Turkey and Qatar’

According to Muhittin Ataman, a professor of international relations at the University of Ankara, some regional powers in the Middle East want to isolate Turkey and Qatar to punish them over their foreign policies.

“Egypt and Israel and the Gulf states led by Saudi Arabia seek to isolate Turkey and Qatar in the region and this fact pushes the two countries to enhance their ties and deepen their alliance,” he told Al Jazeera in a telephone interview.

Ataman said, however, Turkey, Qatar, and those seeking to isolate the two countries have found the current political climate as harmful and unsustainable.

“One should expect moves to normalise relations from both camps in the future, and I believe the way forward will be discussed during Erdogan’s visit,” he added.

When the Gulf crisis erupted in 2017, the four blockading countries stopped trading with Qatar and also banned Qatari planes from using their airspace. Saudi Arabia closed the border with its neighbour, Qatar’s only land border.

Hours after the blockade was imposed, Turkey sent planes full of basic nutrition products – such as milk, yoghurt, and poultry – to avoid potential food shortages in the Gulf state. Since then, the trade volume between the two countries has accelerated rapidly.

According to data from the state-run Turkish Statistical Institute, Turkey’s exports to Qatar reached $1.1bn in 2018, an increase of 69 percent compared with $650m the previous year.

Ayhan Zeytinoglu, the chairman of the Union of Chambers and Commodity Exchanges of Turkey, said last week that Turkish companies had been carrying out projects worth $17bn in Qatar.

Speaking at a gathering of leading Qatari and Turkish businesspeople in Istanbul, he said the number will continue to increase as Doha prepares to host the FIFA World Cup in 2022.

“Turkey, with its functional economy, continues to be a safe-haven for Qatari investments,” he said.

The two countries have also strengthened military ties, with Turkey maintaining a military base in Qatar since 2015 – and the two sides’ armies carrying out joint military drills in recent years.

Ataman said he expected the two sides to work towards diversifying and solidifying cooperation between state institutions in the future.

“They will work to make the current ties institutionalised and permanent regardless of potential changes in governments,” he told Al Jazeera, adding the aim was to form a bond that runs deeper than the personal relationship between Erdogan and Sheikh Tamim.