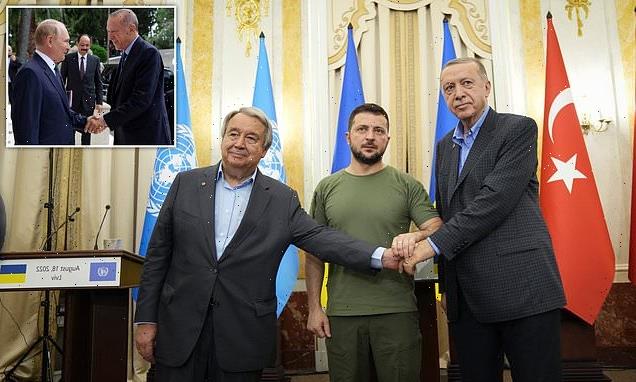 Turkey’s president has today rallied in support of Ukraine, with Zelensky hailing the NATO member’s powerful message- just two weeks after Erdogan flew to Sochi for talks with Vladimir Putin.

President Recep Tayyip Erdogan met with Voldymyr Zelensky in the western city of Lviv in Ukraine and afterwards expressed Turkey’s support towards Ukraine to reporters.

He said: ‘While continuing our efforts to find a solution, we remain on the side of our Ukraine friends.’

His words came just two weeks after he met for talks with Putin in Sochi, with both sides pledging to boost economic cooperation.

Ukraine’s president described Erdogan’s visit to Lviv as a ‘powerful message of support.’

But he added that he was ‘very surprised’ to hear from Erdogan that Russia was ready for ‘some kind of peace.’

Zelensky added that he has ruled out peace with Russia unless it withdraws its troops from Ukraine. 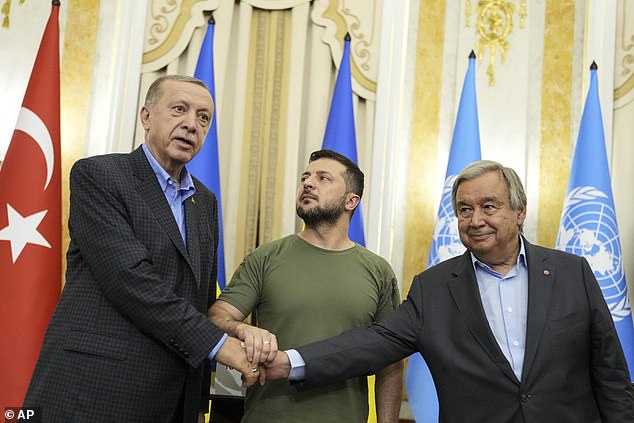 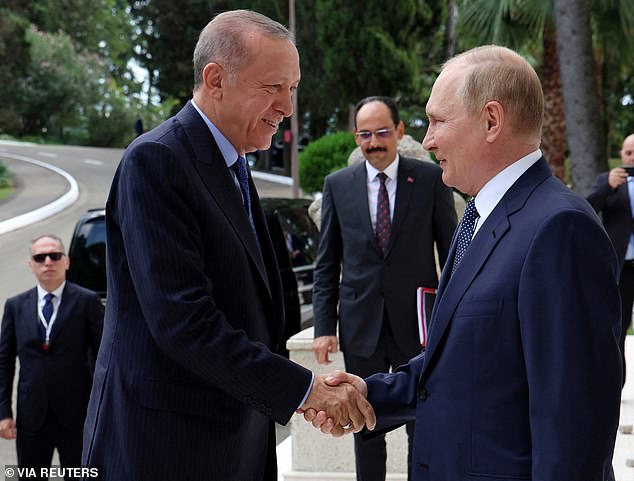 His words of support came two weeks after he met President Putin in Sochi, pictured, and the two sides pledged to boost economic cooperation

‘First they should leave our territory and then we’ll see’, he said.

He added that increased fighting at the plant has raised fears of a nuclear incident and that any damage to the plant would be ‘suicide.’

Mr Guterres, who in a meeting with Zelensky was urged to ensure security at the plant, said he is ‘gravely concerned’ about the situation and it should be demilitarised.

‘We must tell it like it is – any potential damage to Zaporizhzhia is suicide,’ he explained. 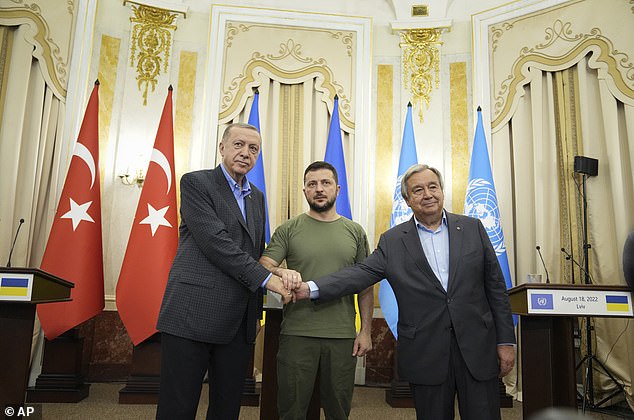 Meanwhile, UN chief Antonio Guterres, who also attended the meeting in Lviv, expressed concern surrounding the Zaporizhzia plant, which has been subject to increased fighting. He said any damage to the plant would be ‘suicide’. Pictured: Erdogan, Zelensky and Guterres in Lviv today

Turkey’s president also expressed his concerns about Zaporizhzhia  and warned of the danger of ‘another Chernobyl’ erupting there.

It came after Zelensky earlier criticised ‘deliberate’ Russian attacks on the facility, ahead of his meeting with Mr Guterres and Mr Erdogan.

But Moscow’s defence ministry has denied deploying heavy weapons at the power plant in southern Ukraine which has been Russian-controlled since shortly after the February 24 invasion.

But fears have grown over an accident rivalling the Chernobyl disaster in 1986 because Russia and Ukraine have accused each other of shelling Europe’s biggest nuclear power plant. 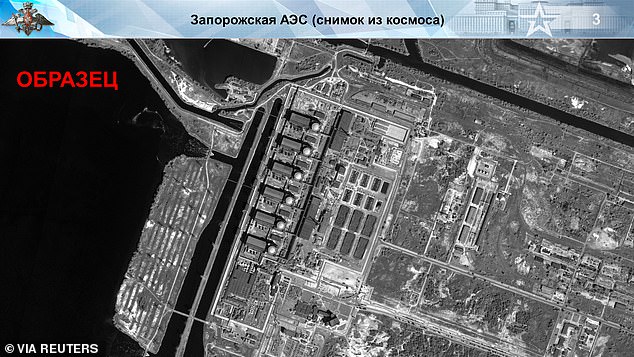 Despite concerns about the facility, pictured, being damaged, Moscow’s defence ministry has denied using heavy weapons at the power plant

Elsewhere, Mr Guterres announced after his talks with the Ukrainian and Turkish presidents in Lviv that the UN wants to increase grain exports from Ukraine before the winter.

He explained: ‘We will do our best to scale up our operations to face… the coming winter.

The UN chief also hailed a deal between Ukraine and Russia which was brokered by Turkey and the UN which led to exports resuming this month after the invasion blocked essential global supplies.

Under the deal, a 25th cargo ship carrying grain departed Ukraine on Thursday, according to Kyiv.

The war rages on in Ukraine, with Russian strikes today battering Kharkiv, killing at least six and leaving 25 injured.

Kharkiv’s head, Oleg Synegubov said that eight missiles were launched from Russian territory at around 4.30am (1.30 GMT) which struck across the city.

And yesterday, a building was destroyed by a strike in Kharkiv.

The city, which is the second-largest in Ukraine, has been persistently shelled since Moscow launched its invasion. 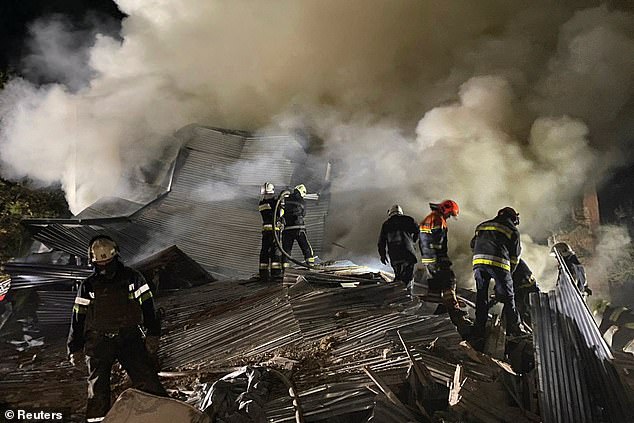 Strikes continue as the war rages on in Ukraine, with Kharkiv battered by the Russian missile. Today at least six were killed and 25 injured by strikes. Pictured: Rescuers work at the site of a building destroyed by a strike in Kharkiv yesterday