‘When art history comes for you’: Twitter users put their own hilarious spin on already iconic photograph of Merkel facing off with Trump at G7

Social media has been flooded with amusing memes of an already iconic photo from the weekend’s G7 summit showing a determined Angela Merkel facing off with an intransigent Donald Trump.

The official photo, taken by Berlin’s official photographer at the gathering in Charlevoix in Canada, Jesco Denzel, was posted online by the German government.

It appears destined for the history books, summing up the deep fractures left by a disastrous G7 summit.

But it set social media alight when it was posted on Saturday, hours before Trump ripped up the hard-fought summit agreements in an angry tweetstorm. 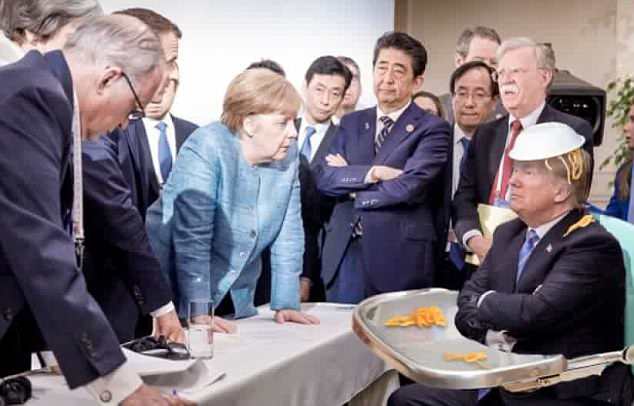 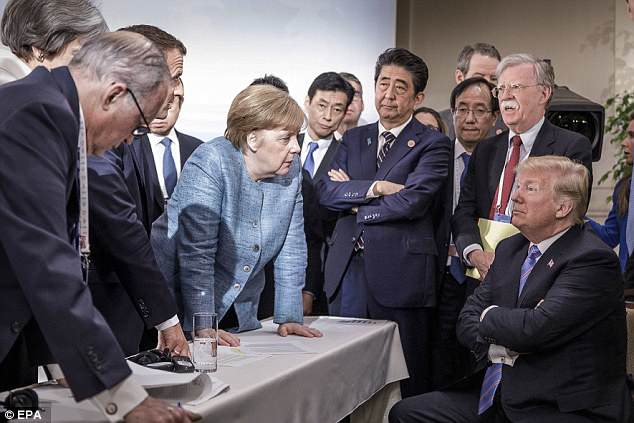 The official photo (pictured), showing a determined Angela Merkel standing up to an intransigent Donald Trump, was posted online by the German government

The image, which drew comparisons to a Baroque painting, shows Merkel standing at the centre of the image leaning across a table before a seated Trump, his arms crossed in defiance.

Merkel, looking focused or exasperated depending on the viewer’s interpretation, is flanked by British Prime Minister Theresa May and French President Emmanuel Macron, their faces largely obscured.

Japan’ Prime Minister Shinzo Abe looks on with a world-weary expression and his arms crossed.

A number of memes saw the image edited to show the US president as a petulant child – including one with Trump overturning a bowl of spaghetti on his head and another clutching a teddy bear as Merkel sternly looks on. 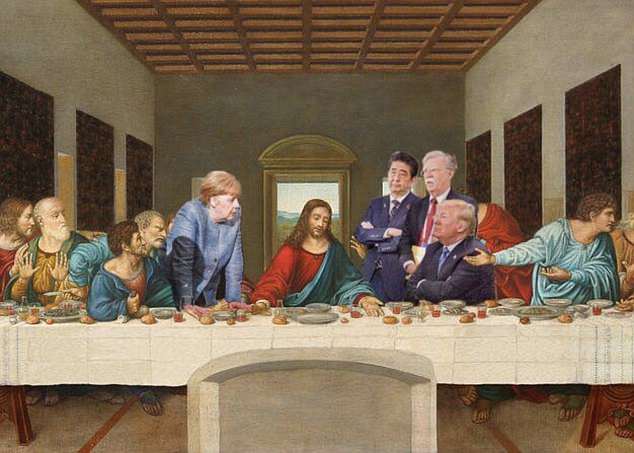 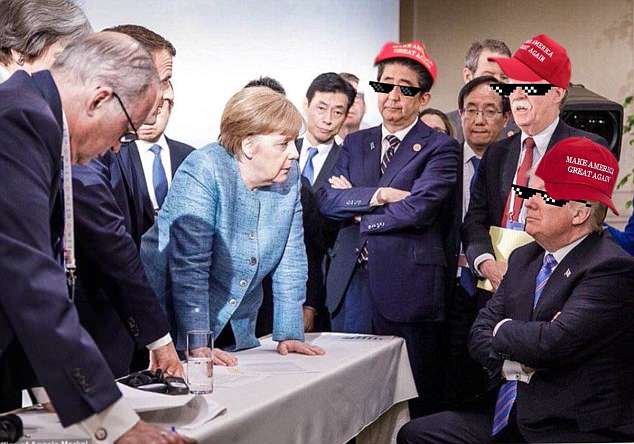 Another transplanted the politicians onto an image of Leonardo da Vinci’s The Last Supper – with Merkel and Trump on either side of Jesus.

A number of memes saw the image edited to look like a painting, including one that put it on display at an art gallery.

Alongside a number of the art-themed memes, Toronto International Film Festival’s artistic director Cameron Bailey wrote: ‘When Art History comes for you.’

One Twitter user compared the image to a scene from The Simpsons, adding: ‘Simpsons predicted the future again.’

The image also succeeded in launching an internet-wide caption contest. 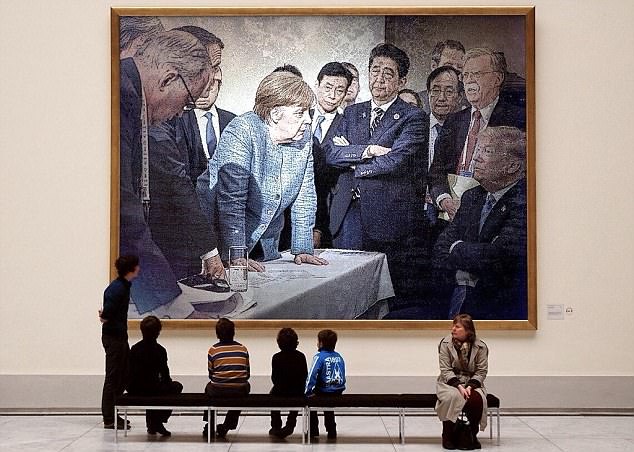 A number of memes saw the image edited to look like a painting, including one that put it on display at an art gallery 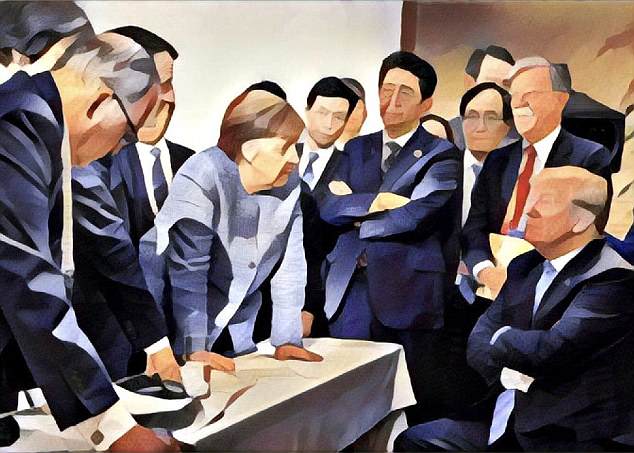 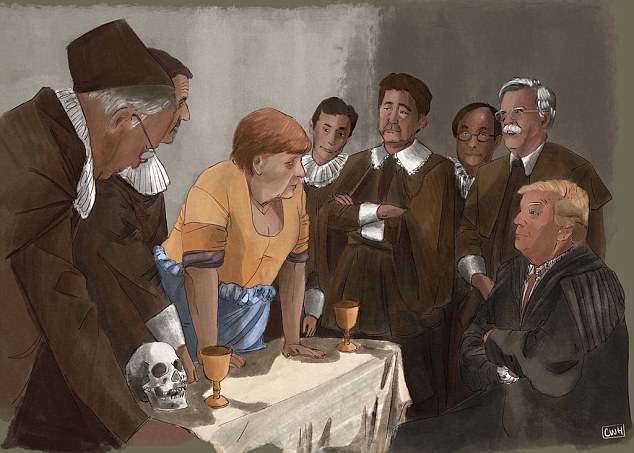 Belgian Guy Verhofstadt, who heads the European Parliament’s liberal group, chose the tart tagline: ‘Just tell us what Vladimir has on you. Maybe we can help,’ in a reference to alleged collusion between Russian President Vladimir Putin’s government and the Trump team to influence the 2016 presidential election.

‘This looks like an episode of Celebrity Apprentice where Trump is about to fire Angela Merkel because her strudel marketing plan fell through,’ comedian Tim Young tweeted.

Despite the meme-worthy nature of the photograph, many also saw it as a distillation of a crisis of the West. 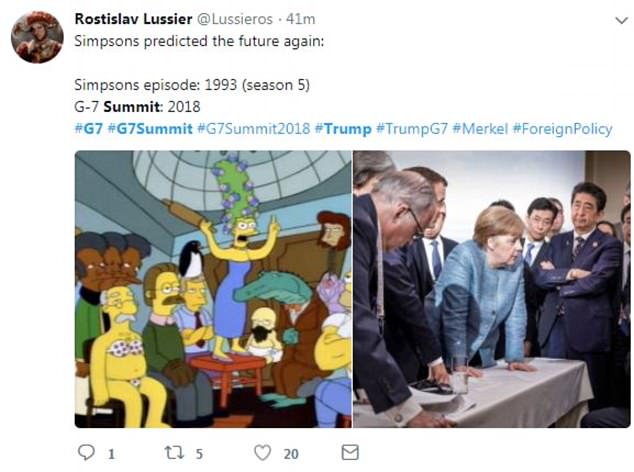 One Twitter user compared the image to a scene from The Simpsons, adding: ‘Simpsons predicted the future again’

Trump ‘uses Twitter to snub American’s partners in Europe and the world – is the G7 finished?’

Other observers hailed a triumph for the spin doctors in Berlin eager to present Merkel as the leading defender of the global order.

‘A hands-down public relations triumph for Germany,’ news weekly Der Spiegel said on its website of the picture that for most of the weekend seemed to capture the world’s imagination.

‘In politics it’s not just content that counts but images too.’