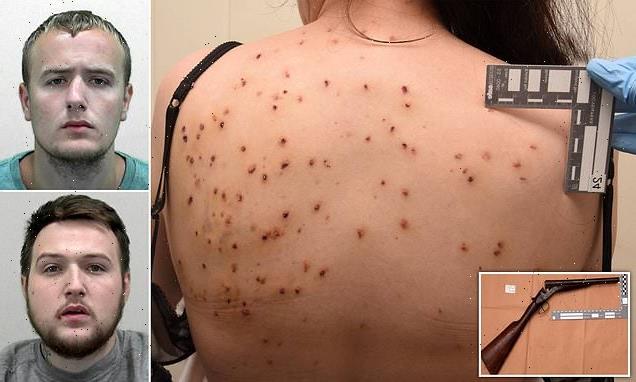 Two brothers who blasted an innocent mum with a shotgun as she cooked cottage pie have been jailed for 24 years each.

Miss Robinson was in her kitchen in Westerhope, Newcastle, at around 10pm on October 3 last year, when she heard a loud bang and her window breaking before feeling something hit the side of her face and back.

Thomas Lee, 21, and James Lee, 27, opened fire at Emma Robinson through her window in a revenge attack following a fall out between the brothers and her son.

The Lee brothers were previously convicted of attempting to murder Robinson by jurors at Newcastle Crown Court, and now they have been sentenced to 24 years each in prison.

Speaking during the trial, Miss Robinson said she had been shot but didn’t realise what had happened initially. 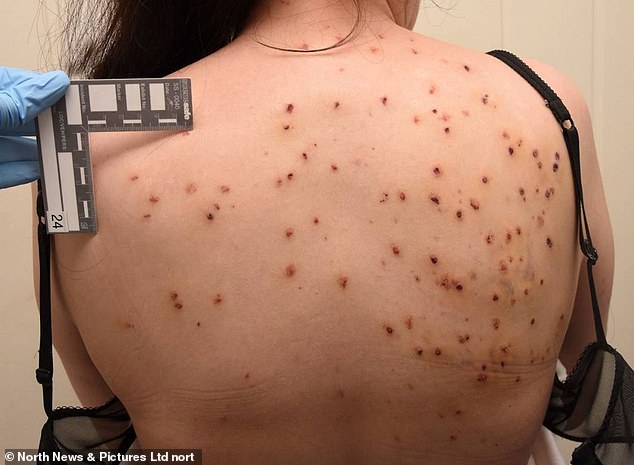 Thomas Lee, 21, and James Lee, 27, opened fire at Emma Robinson through her window in a revenge attack following a fall out between the brothers and her son. Pictured: The injuries sustained by Robinson on her back 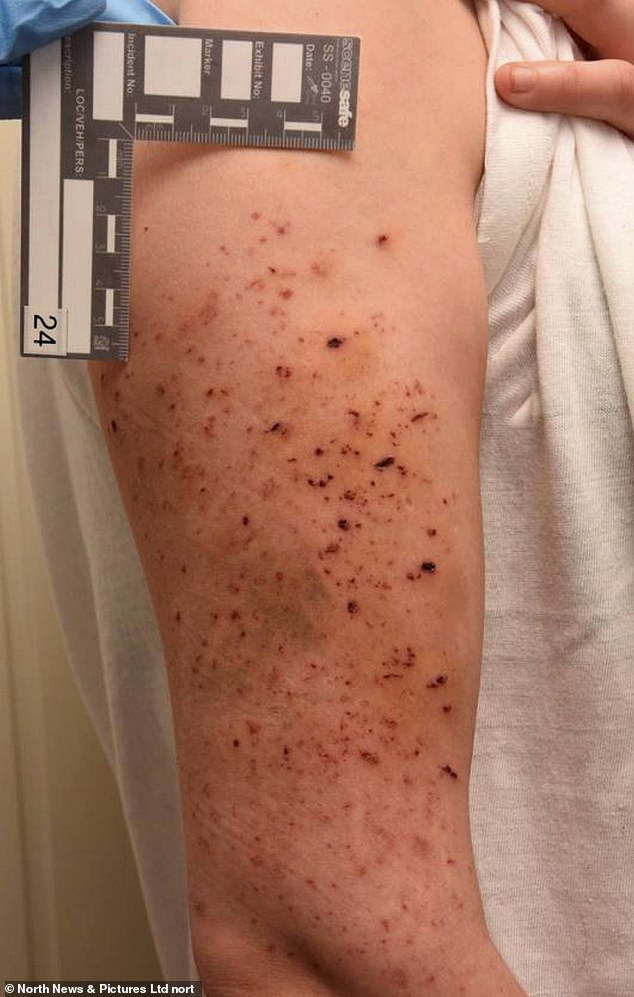 Pictured: Scars on Miss Robinson’s arm sustained after being fired at by the Lee brothers

She said: ‘I was making cottage pie in the kitchen, facing the microwave.

‘I heard a loud, like a bang but I don’t know what type of bang but I could hear the glass at the same time.

‘I felt something hit the side of my face and I turned round and it’s obviously caught my back.

‘I went straight through to the living room. There was glass everywhere.’

Asked to elaborate on the bang, she said: ‘It was like an echo type thing then I felt something hit my face but I don’t know if it was the glass or something else and something hit the top of my back.’

She added: ‘I was in shock at the time. It more sinks in afterwards when you think it could’ve been really serious this.’ 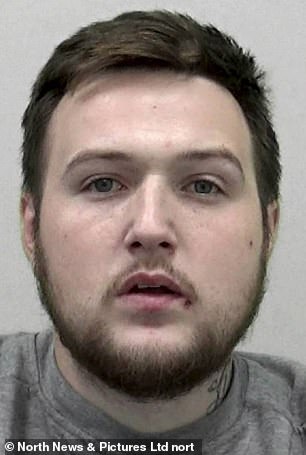 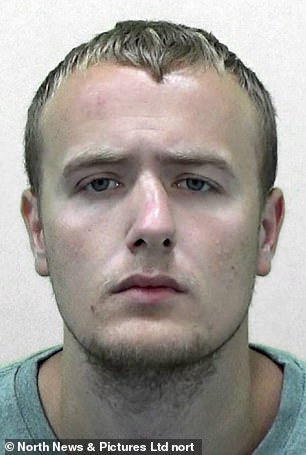 The Lee brothers Thomas (right) and James (left) were previously convicted of attempting to murder Robinson by jurors at Newcastle Crown Court. And now, they have been sentenced to 24 years each in prison

The Lees have now been jailed for a combined 48 years, and Robinson said she has been left with scars where the pellets were removed from her arm, shoulder and back, which she feels self-conscious about.

She added that she has trouble sleeping and suffers from anxiety and depression.

Miss Robinson said: ‘When I’m alone at night I keep thinking about what happened and how much worse my injuries could have been.

‘I keep thinking to myself what would have happened to my children if my injuries had been any worse. I already rely on my mother and don’t think she could have coped if she had to look after me or if I was not there at all.’

She added that she now has black out blinds at her home, doesn’t stand by windows and is nervous when she hears loud bangs, such as fireworks.

The court heard windows of the Lee brother’s mother had been put out previously and that the brothers had been acting out in retaliation.

At about 1.35am on October 5, the Lees’ cousin, Jordan King, was in his flat at St Keverne Square, about a mile away from Fordmoss Walk, when he was shot at.

Prosecutor Simon Myerson QC said it was not necessary for the prosecution to prove a motive for the attacks but told the jury: ‘As far as we can tell, Jordan King was shot at because he had an argument with one or both of these men and Emma Robinson was shot because earlier on October 3, Thomas Lee and his father had been involved in an argument with her son. 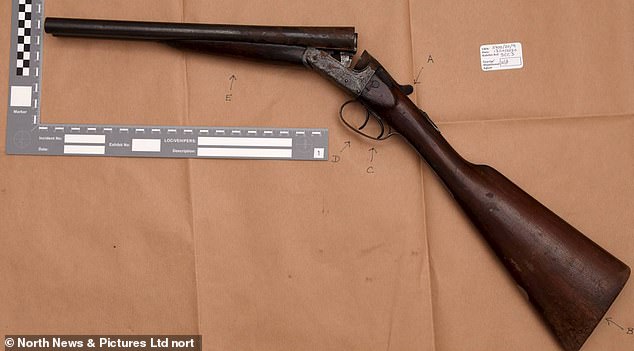 Pictured: The shotgun used by the Lee brothers in October last year to fire through a window at Emma Robinson

‘On October 3 in the afternoon, Thomas Lee was seen outside his father’s address screaming in anger and saying on the phone “I’ve done people’s knees before, I’ve used a gun”.

‘It appears these two shootings were carried out for revenge and because they were cross.’

The Lees were cleared of trying to murder Mr King, around 26 hours after shooting Miss Robinson, but were found guilty of attempting to wound him with intent by firing a shotgun at him but missing.

James Lee admitted dangerous driving after the second attack and was also convicted of possessing ammunition when prohibited due to the fact it was within five years of him being imprisoned for nine months in 2017 for religious or racially aggravated harassment. Thomas Lee admitted possessing a firearm while prohibited. 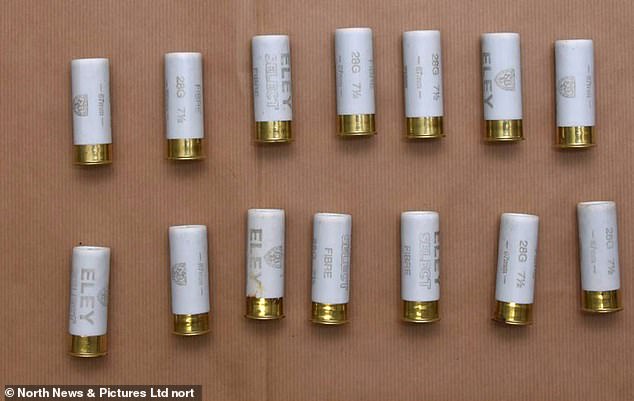 Pictured: Ammunition seized by police after Miss Robinson was fired at back in October

James Lee also admitted an unrelated charge of child cruelty after wiping what he says was chocolate on a child’s mouth and telling them it was excrement.

Thomas and James will serve at least two-thirds of their combined 48 years behind bars while Judge Moreland found Thomas Lee was a dangerous offender and imposed an extended licence period of an additional four years.

James Lee will also be banned from driving for a year after his release.