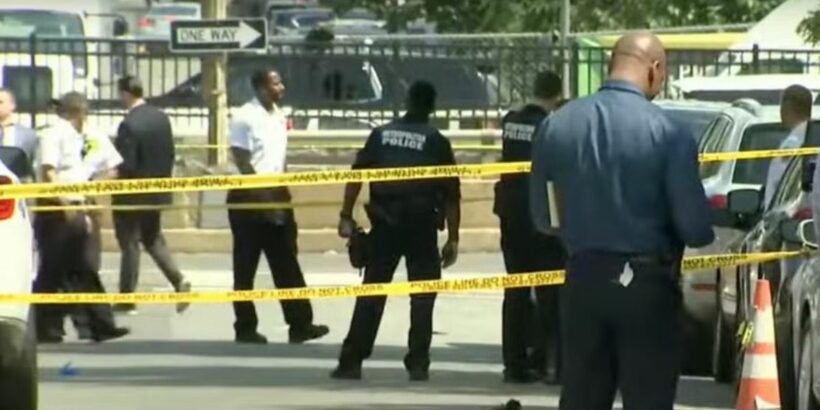 A horror shooting outside a retirement home has killed two people in the United States capital of Washington DC.

At least two people jumped out of a black car armed with either semiautomatic pistols or rifles and opened fire on adults in the neighbourhood of Truxton Circle, leaving two dead and three more injured.

Police are now hunting down the shooters and have shared a photo of the vehicle they are suspected to have pulled up and sped away in soon after midday on Wednesday.

The authorities received a call to the shooting at around 12.49pm and officers were at the scene within a minute, according to a statement given by the Executive Assistant Chief of DC Police Ashan Benedict.

Those wounded from the gunfire were remarkably able to walk themselves from the corner of Washington DC's O Street NW and North Capitol Street, all the way to hospital, NBC reports.

Police tweeted a snap of the suspected vehicle thanks to a witness who according to Mr Benedict, claims “a small black SUV was proceeding southbound on North Capitol Street, made it right on O street and stopped the vehicle in front of” an elderly people's home.

The witness told police: “At least two shooters exited the vehicle and began shooting at folks that were on the block. They were either in chairs or standing. The individuals got back in that black SUV and went westbound on O Street."

Executive Assistant Chief Benedict added that those shot were all black males and the incident has no connection to another shooting which happened just hours earlier in DC.

Police are yet to confirm whether any retirement home residents were shot in the attack but noted the victims don’t “appear to be on the older side”.

In fact, despite the immediate location, the area is known to police as being rife for drug dealing.

Mr Benedict continued: "MPD routinely polices this area and makes arrests for narcotics violations but our folks, unfortunately, get back out. This is an ongoing problem for us so we need the community's help to continue to quell the disturbance in this area.

He added at a press conference on Wednesday: “The causes of our homicides for are multifaceted. They're … drug-related, they're crew related, they're crimes of passion and they're random acts of violence, occasionally, and they are arguments that escalate.

“The best we can do is go after those people that we know are shooters … and keep them behind bars.

“I would just ask people to settle their problems in a different way. A lot of these things just escalate for no reason and that involves gunplay and there's a lot of guns in this city.”