ROBERT HARDMAN: For 100 years, Binns (known as the Harrods of the North East) and M&S stood proudly at either end of Darlington High Street… now they’re closing — and locals fear it’s the beginning of the end

To the casual observer, this handsome town centre would appear to be in rude health. Lunchtime crowds are enjoying the sunshine. There is a feel of bustle and purpose around the grand old covered market and the pedestrian precincts.

Yet you don’t have to spend long in the centre of Darlington to sense the nervousness. For here is a classic example of a high street being confronted by a series of events, each of which, individually, represents a challenge. Collectively, they have the makings of a crisis.

At one end of the main pedestrian thoroughfare stands Marks & Spencer, which has been in the town since 1911 and on its present site since 1922. It’s a decent-sized branch, too, with a cafe bolted on to the usual fashion and food departments. 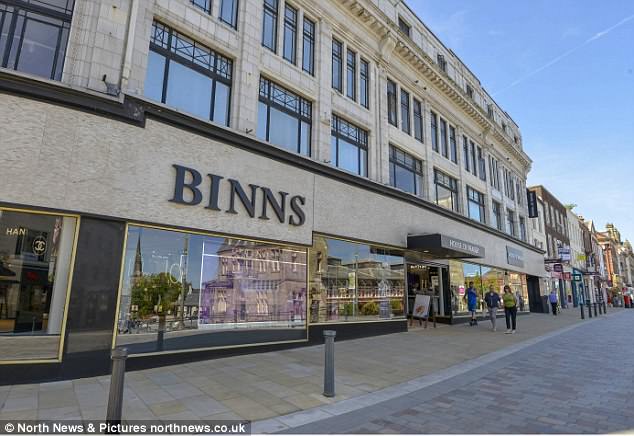 Classic regional department store Binns, known as the ‘Harrods of the North East’ – has been in Darlington since 1922

At the other end of the main drag stands Binns, the classic regional department store with an elegant beauty section at the main entrance and lots going on within. It has been here since 1922 — the ‘Harrods of the North East’, as they like to call it.

The local paper, the Northern Echo, describes these two retail giants as the ‘bookends’ of Darlington’s town centre.

So it is hardly surprising that the town is in a state of shock after being informed, within the space of a few weeks, that both these landmarks will shortly disappear.

Marks & Spencer is off to an out-of-town site, while Binns, part of the House of Fraser group, is shutting down altogether.

‘Can the High Street live on with nothing at either end holding it together?’ asks the Echo. Everyone hopes so, but, for now, no one is entirely sure how. 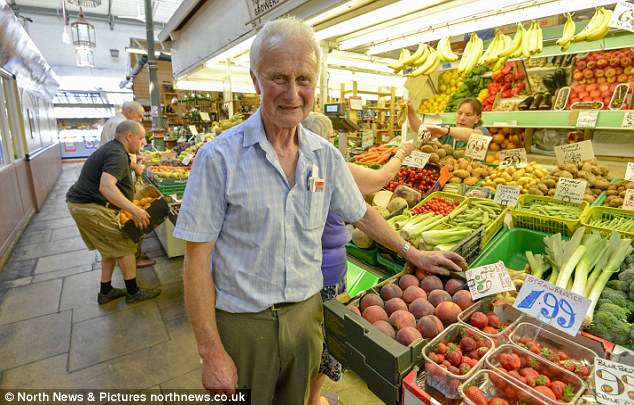 Add in the corrosive iniquity of the business rates system, which disproportionately hits town centre retailers, plus the tax scams enjoyed by the offshore internet giants, and you start to wonder why anyone is going to want to open a high street business anymore. Why not just leave it to the charity shops, the bookies and the fast food brigade?

What makes the situation so frustrating is that this does not feel like a place in terminal decline. Darlington has a strong sense of community, some grand architecture, an enviable history and a prosperous County Durham hinterland. It feels like a place that should walk tall.

‘Business rates in the UK are the highest in the developed world, way higher than anywhere else in Europe . . . it’s certainly not a level playing field. It’s the largest single tax that we pay.’

‘Our rates bill has gone up every year over the last decade. Having a vibrant high street is part of our culture and history.’

‘The relief for small businesses is minuscule. High business rates can lead to a tipping point, with these desolate high streets where all the shops are empty.’

‘It would be great if business rates were resolved and parking charges were reviewed — all those kinds of things — to create a level playing field for high street retailers.’

‘High street businesses are closing because of the increases in business rates, and those that are not closing have mostly stopped investing in new sites. Sales are not down; it is tax increases and other legislation that is killing the industry.’

‘Pubs pay too much compared to supermarkets. Combined with VAT inequality — whereby pubs pay 20 per cent on food sales and supermarkets almost nothing — the combination is resulting in intolerable pressure.’

‘In many areas, rates are now as expensive as rents, which hinders high street regeneration.’

‘Business rates are an unfair burden of taxation directly contributing to the challenges the high street is facing. These challenges will continue until the system is reformed to create a level playing field between high street and online retailers.’

‘There is an advantage for those without bricks and mortar operations, so there’s a strong case for a level playing field in business rates and taxation more generally. Businesses like ours with lots of property face a bigger burden than others.’

Business is brisk as I walk through Binns. People don’t just come here to shop but to meet in one of its two cafes. Generations of young Darlingtonians might be taken for tea at Binns by way of a treat. The Northern Echo has been assured by business analysts that this store makes a tidy profit of around half a million a year.

Yet, that seems to be of scant relevance to this drama. The decision to close has been made by a consortium based in China, while the freehold belongs to a pension fund in Bahrain. The people of Darlington are mere onlookers.

‘Darlington doesn’t have a proper vision and it hasn’t had one for years,’ says Bill Gillow, owner of Geoffrey Gillow — a stylish men’s and ladieswear shop founded by his father, Geoffrey, more than 50 years ago in the town’s smart Grange Road district. It has a loyal following for miles around. Cricket legend Sir Ian Botham is among its devotees.

Like everyone, Bill is very worried about the closure of Binns, a two-minute walk from his shop.

‘It might not be huge to them [House of Fraser], but it’s huge to us,’ he says, explaining that his wife works in Bishop Auckland, 12 miles away.

‘All the women she works with say that if Binns goes, then they won’t be visiting Darlington anymore.’ His other big worry is parking charges. Darlington offers no leeway to the motorist.

‘There are ex-customers of mine who will spend more on petrol driving to somewhere like Yarm or Northallerton to have free parking than they would spend on parking here,’ says Bill.

‘The best thing we could do right now is to abolish parking charges altogether.’

Bill tells me that his 101-year-old father managed to get three parking tickets in a single morning shortly before surrendering his driving licence last year.

‘He got one because he hadn’t displayed his disabled badge properly, so he went off to complain to the council — and had two more by the time he came back!’

After a year on this spot, she says that business has been good, but she is worried about the exodus of big commercial names.

‘We already had a lot of customers asking why people were going to come into town after M&S had gone — and then Binns, too,’ she says.

However, she and her fellow traders are not standing still. They have formed a local action group to boost footfall — ‘We’ve got to be proactive’ — and parking is at the top of their list.

Samantha has also banned her husband and three sons from online shopping. ‘We’re a non-internet home,’ she says. ‘If you’re in retail, it’s the least you can do.’

Over the road, Tony Bowie, 53, has had his Imperial Express cafe and restaurant here for more than 25 years. His big gripe is that the traffic wardens operate a seven-day week. Like many, he points to the large — and entirely empty — market square round the corner.

Darlington Council moved the market stalls elsewhere a while back, creating an attractive open space. But it is not doing anything. Several retailers tell me that an hour’s free parking on the square could change everything.

Darlington still has its indoor market. Robin Blair’s family have been greengrocers there for nearly 150 years. Robin started selling fruit and veg at the age of six and now he is 73. The ‘JJ Blair’ stall is a riot of colours and smells, piled high with fresh produce that he sources before dawn every day. It puts the average supermarket fruit and veg section to shame.

Yet Robin points out that the odds are stacked against town centre traders like him because business rates are higher in the town centre and the out-of-town supermarkets can offer free parking. But he is resolutely cheerful. 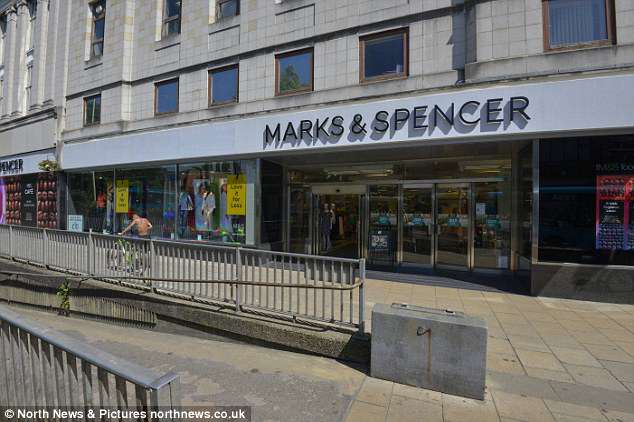 ‘People like coming in to town to shop, and I’m sure we save the NHS a fortune because it cheers them up and they don’t go away depressed,’ he says. ‘We may have problems but we are certainly not dead.’

It’s a splendid old indoor market with a magnificent Victorian clock tower. Lacking the funds for badly-needed maintenance work, the council has leased the market to a private investor, Market Asset Management, which is ploughing £1.8 million into restoration work. But the town is going to need a lot more than that.

Darlington’s dilemma is a familiar one. Retail ‘tsars’ have been demanding action for years. One of the most respected is Bill Grimsey, former boss of Wickes and Iceland, who carried out an influential review of the high street in 2013 and recommended it would need a lot more than retail to secure its future.

Dismayed by the recent collapse of chains like Maplin, he is bringing out another report tomorrow, co-written with experts including retail analyst Matthew Hopkinson.

‘People now go to town centres because they want to, and not because they have to,’ Hopkinson tells me, pointing to the need for a much greater emphasis on town centre residential space.

Rachel Anderson, head of policy at the North East England Chamber of Commerce, is completing a report into the future of the high street on her patch.

She points to the lack of advice for retail start-ups compared to the vast amount of expertise available to other business sectors, as well as to the over-supply of retail premises.

‘Councils which don’t have a good plan can end up in a vicious spiral,’ she says. ‘There is an increasingly strong move away from pure retail to leisure. You need a good local authority with a short, medium and long-term strategy.’

Darlington Council’s cabinet member for the economy, Labour councillor Chris McEwan, says that his team, along with the local MP, are doing all they can to find a new tenant for the Binns site.

He agrees that the town centre needs more people living in it. He also wants to see retailers staying open later to catch the after-work crowd.

‘There’s a lot we have to do and we cannot fix this all by ourselves,’ McEwan says, adding that business rates are also a factor, though there is precious little that his council can do about those.

As for parking, he says that, starting this month, the council is introducing two hours of free parking in car parks on the edge of town.

But it’s not enough, according to opposition leader Heather Scott, who takes me on a tour of town centre retailers. They all say the same thing: make town centre parking easier and the rest will follow.

‘Free parking on the outskirts is not enough if people still have to walk in,’ says Heather, a Tory councillor since 1976. She feels that the war on motorists has gone far enough. A pedestrianised town centre is all very well, she says, but not much use if there are no pedestrians.

Bill Gillow believes that the town missed a trick a long time ago. ‘People say we need “new ideas”, to which I say: “What’s wrong with old ideas?” ’

He points to the fact that the first public railway in the entire world was the Stockton-Darlington line, opened in 1825. Great chunks of it still remain, overgrown and forgotten.

But with its bicentenary just seven years away, there is a hope that some of it could be reopened in some form.

With that in mind, the council is drawing up a bid to nominate Darlington and its surrounding area as Britain’s 2025 City of Culture. I am sure it would do an excellent job. I just hope it’s not too late.