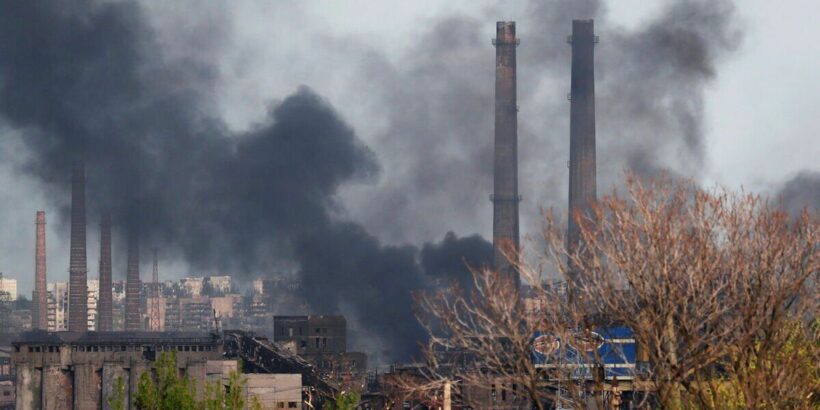 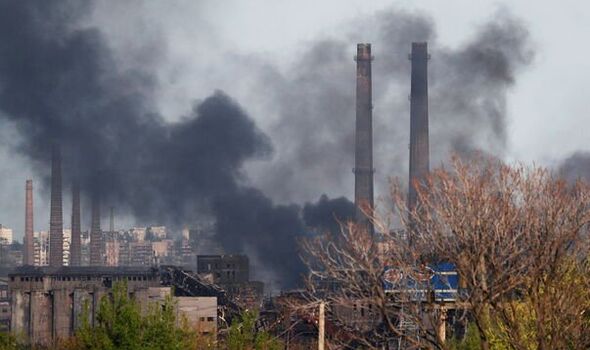 Pictures showed smoke rising from the encircled site in Mariupol and a truck-mounted launcher firing rockets.

Ukrainian soldiers said Russian planes, tanks and warship missiles were all bombarding them.

An officer in the Azov regiment, which is holed up in the steelworks, said Russia’s army was trying to storm the plant after overnight air raids.

The renewed attack followed a brief UN-brokered ceasefire around the sprawling Soviet-era complex that allowed several groups of civilians to escape the last pocket of resistance in the southern port.

Some 156 exhausted people managed to reach Ukrainian territory, many in tears, yesterday after a 150-mile bus trip along a road partly turned to rubble.

A spokesman for the World Health Organisation said: “We received many women and children who arrived from Mariupol to a reception centre in Zaporizhzhia.

The people of Zaporizhzhia have been opening their hearts and arms to their neighbours.

“All of us are waiting for the evacuees to provide them with the care they need.”

But UN and Red Cross attempts to get more out of the “horrendous” conditions are being hampered by the Russian blitz.

Ukrainian National Guard commander Denys Shlega said: “Those still remaining include dozens of children who are still in bunkers underneath the plant.”

Ukraine’s deputy prime minister vowed to get everyone out, including the wounded.

Iryna Vereshchuk told reporters in Zaporizhzhia that aid workers had asked for more time – but the Russians refused.

Residents still living in Mariupol spoke of their despair.

“You wake up in the morning and you cry. You cry in the evening. I don’t know where to go at all,” said Tatyana Bushlanova at a blackened apartment block as shells exploded nearby.

Around 1,000 Ukrainian soldiers and marines are still holding out in tunnels and bunkers in the steelworks.

If Russia fully secures the city it will achieve its strategic goal of a land bridge from Russia to Crimea. Ukraine will lose its biggest port in the region and face the prospect of being cut off from the Black Sea.

Elsewhere yesterday, Ukraine’s second-biggest city Kharkiv was again under heavy bombardment as Russian forces try and encircle troops in the east of the country.

Heavy clashes were taking place around Popasna in Luhansk, with shelling so intense it was not possible to collect bodies, said regional governor Serhiy Gaidai.

“I don’t even want to speak about what’s happening with the people living in Popasna, Rubizhne and Novotoshkivske right now,” he added.

“These cities simply don’t exist anymore. They have completely destroyed them.”

Sanctions will make it harder for Moscow to replace military hardware, they say. Their report said: “This will have a lasting impact on Russia’s ability to deploy conventional military force.”

The report added: “Russia’s defence budget approximately doubled between 2005 and 2018, with investment in several high-end air, land and sea capabilities.

“However, the modernisation of its physical equipment has not enabled Russia to dominate Ukraine. Failures both in strategic planning and operational execution have left it unable to translate numerical strength into decisive advantage.

Britain is to send 13 armoured 4×4 vehicles to Ukraine “as quickly as possible” to evacuate civilians.