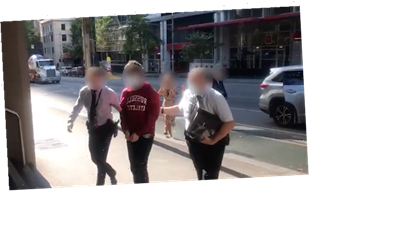 Two young men are due to face court in Melbourne on Thursday with counter-terrorism police to allege the pair attempted a terrorist attack.

Investigators arrested a 19-year-old and a 20-year-old, both from Epping, and a 16-year-old boy from Pascoe Vale on Wednesday after police became concerned about a fire and an assault they believe could have been motivated by religious extremism. 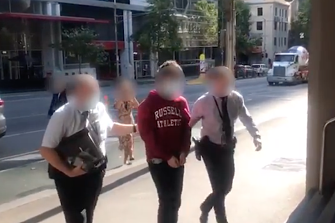 Investigators escort a suspect to be interviewed by police.Credit:Nine

On Thursday overnight the 19-year-old was charged with attempting a terrorist act, intentionally causing injury, acting in preparation of terrorist act and membership of a prescribed terrorist organisation (ISIS).

Meanwhile, the 20-year-old was taken to hospital under police guard after a medical episode and has also been charged with one count of attempting a terrorist act.

The 16-year-old boy was released without charge earlier on Wednesday.

In a press conference on Wednesday afternoon, police said they suspected two incidents that occurred earlier in the year – a fire lit on February 18 in bushland outside of Melbourne and a public assault on a person in metropolitan Melbourne on March 10 – could have been motivated by Islamic extremism.

Investigators said they did not expect any further arrests and that they were not linked to any previous operational activity undertaken by the counter-terrorism team.

The operation is ongoing, but AFP Counter Terrorism and Special Investigations Assistant Commissioner Scott Lee said there was no threat to community safety.

“The community can be reassured that we’ve taken action at an early stage to ensure that there’s no risk to the public, and we’re confident that the action that we’ve taken today has mitigated that risk,” Mr Lee said.

Police say two of the men are from the same family.

Mr Lee said aspects of the fire in February made investigators suspect it was motivated by terrorism.

“There is an ideology, and a violent extremist ideology, that has caused us concern, and it’s as a result of that ideology that we’re looking at these incidents being connected to a terrorism motivation,” Mr Lee said.

“There are certain aspects to the lighting of the fire that led us to suspect it was a terrorism motivation.”

Separately on Wednesday, the head of the nation’s domestic spy agency, ASIO boss Mike Burgess, announced he will stop referring to “Islamic extremism” and “right-wing extremism”, saying his organisation needs to be conscious that the names and labels it uses are important.

He said his agency would now use the umbrella terms of “religiously motivated violent extremism” and “ideologically motivated extremism” in a significant change to the language it uses to talk about the threats facing the nation.

Director of the Forum of Australia’s Islamic Relations, Kuranda Seyit, who has worked in anti-radicalisation programs for Muslim youth, said it was premature to make any comments about the arrests but he was concerned authorities had identified the religious background of the offenders.

“I feel this is something that should be avoided, because crime has no religion,” Mr Seyit said.

“He shouldn’t have mentioned the person’s religion because nothing’s been ascertained as to their religious backgrounds or their religiosity.”