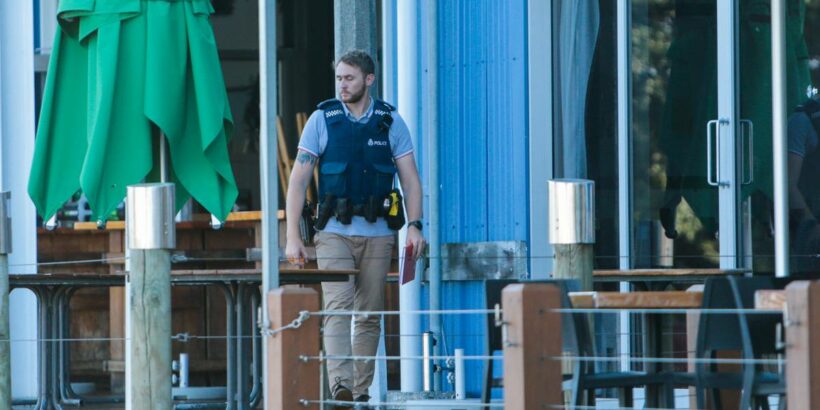 Two men believed to be closely connected to the drive-by shooting in West Quay, Napier, have been arrested after a police chase – one in the Karamu Stream.

The shooting of a Thirsty Whale Bar staff member and another man outside the busy club about 12.30am on Sunday has prompted a significant manhunt around the region, with police upping patrols and carrying firearms.

About 1.30am on Monday police officers attempted to stop a vehicle on Te Ara Kahikatea, in the Hastings suburb of Whakatu.

A police spokeswoman said the vehicle fled and was abandoned a short time later with the occupants leaving the scene on foot.

Two people were arrested at the scene, but another man fled into the Karamu Stream.

Police officers managed to retrieve the fleeing man from the water and arrest him.

Eastern District Police commander Jeanette Park said the man was taken to hospital in a moderate condition and assessed and discharged.

“Two men are assisting police with their enquiries into the shooting incident, although no charges have been filed at this stage,” she said.

“Police continue to follow positive lines of enquiry including working their way through a significant quantity of CCTV footage.”

Park said a number of outstanding enquiries are yet to be completed in relation to the incident, and staff continue to investigate other potentially connected events.

Police said on Sunday that five men in a vehicle had driven up to the bar after an earlier altercation and fired shots at a group of people, who appeared to be known to them, standing outside.

Park said police are communicating with senior members of local gangs in an effort to “re-establish calm”.

New Zealand gang expert and sociologist Dr Jarrod Gilbert said the shooting was symptomatic of the rise in Mongrel Mob members and chapters in Hawke’s Bay.

He said the “fatherland” of the gang has seen a rise in young prospects “wanting to make a name for themselves”.

“When you get younger people coming through the gangs, they are quicker to violence,” he said. “That can lead to a quicker response to the trigger.

“When you’re younger, you just don’t understand the rules or how the scene managed to exist in peace for long periods – which by abiding to certain unwritten rules about turf and territory.

“When those things fall away, tensions are inevitable and unbearable.”

Park said police recognise the shooting, and other recent gang activity, was a concern for the community.

“We are maintaining temporary carriage of firearms for staff and this decision is being reviewed daily,” she said.

“The investigation team has spoken with both victims of the incident and the owners of licensed premises in West Quay to keep them appraised of the on-going investigation.”

“Gangs firing bullets at each other is bad enough, but when it’s in a place where the public can and have been hurt, it’s completely unacceptable,” he said.

“Some of the etiquette within the scene has perhaps fallen away.”

“I feel for those who were injured, their families, and those who witnessed this disturbing incident,” she said.

Gilbert said policing gangs away from anti-social and violent behaviour is important, community help can help even more.

“Over the long term, it’s those who can get alongside them that aren’t in a blue uniform that will have the best outcomes,” he said.

“The blue uniforms are incredibly important in the short time and within these acute periods of tension.”

Anyone who may have witnessed the incident on West Quay outside licensed premises including The Thirsty Whale, Gin Trap and Paddy’s Irish Bar, or the confrontation between rival gang members prior to shots being discharged is encouraged to contact police.

If you have any information or video footage which may assist, please phone Police on 105 and quote Operation West Quay and/or file number 210301/4406.

Alternatively, you can phone Crimestoppers anonymously on 0800 555 111.