Two tickets to SPACE are thrown into sale of $85million Manhattan condo which also includes two Rolls Royces, summer mansion in the Hamptons, a Lamborghini, courtside Nets seats after it fails to sell

The owner for a New York City condo is offering a trip to outer space thrown in with the purchase of an $85 million apartment.

The 15,000 square-foot duplex, which takes up the entirety of the 45th floor of the Atelier building on west 42nd street in Manhattan, boasts an array of high end luxury amenities including two Rolls Royce Phantom luxury cars, a Lamborghini, courtside seats for Brooklyn Nets games, a mansion in the Hamptons for the summer, a live-in butler and a private chef.

But what really makes the property stand out is that the owner has included two seats on a trip to outer space in the sale.

Realtor River 2 River declined to give further details about the out of this world trip. But the listing shows it was recently added to the sale of the apartment, which has been on the market since March.

The listing also reveals that the sale also includes a package of perks that most people can only dream of.

When buyers pick up the keys they will be given a yacht worth $1 million which comes with the docking fees paid for five years.

The new owner will be given two Rolls Royce Phantoms, one convertible and one hardtop, worth $500,000 each. They can make any alterations they like as the developers have included a $2 million construction credit.

Among the other perks is dinner for two once a week for a year at Daniel Boulud’s Restaurant Daniel in New York. The restaurant has two Michelin stars and dinner typically costs $400 a head including wine. 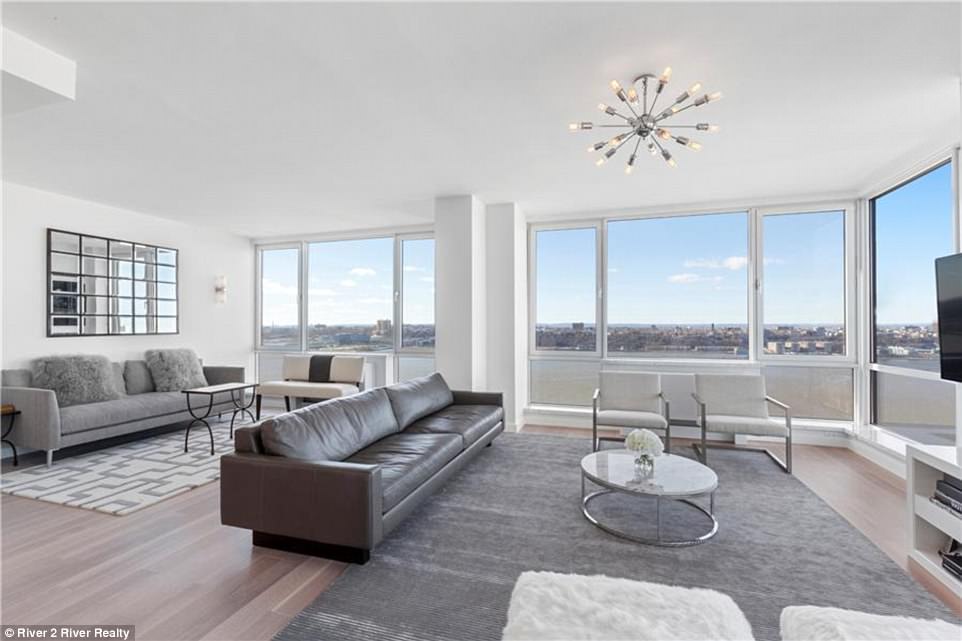 Most expensive: At $85 million the midtown Manhattan apartment is the highest-price condominium in the city’s history 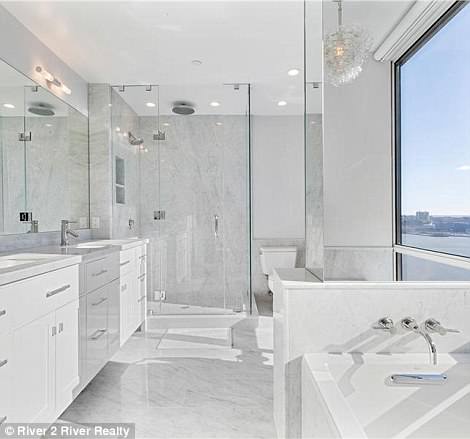 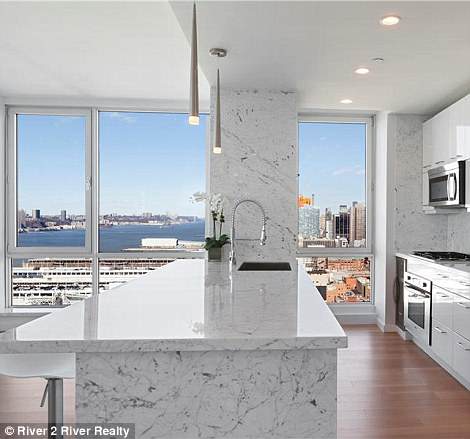 Inside and outside: The apartment is designed to cater to billionaires with its views over the Hudson and its marble finishes 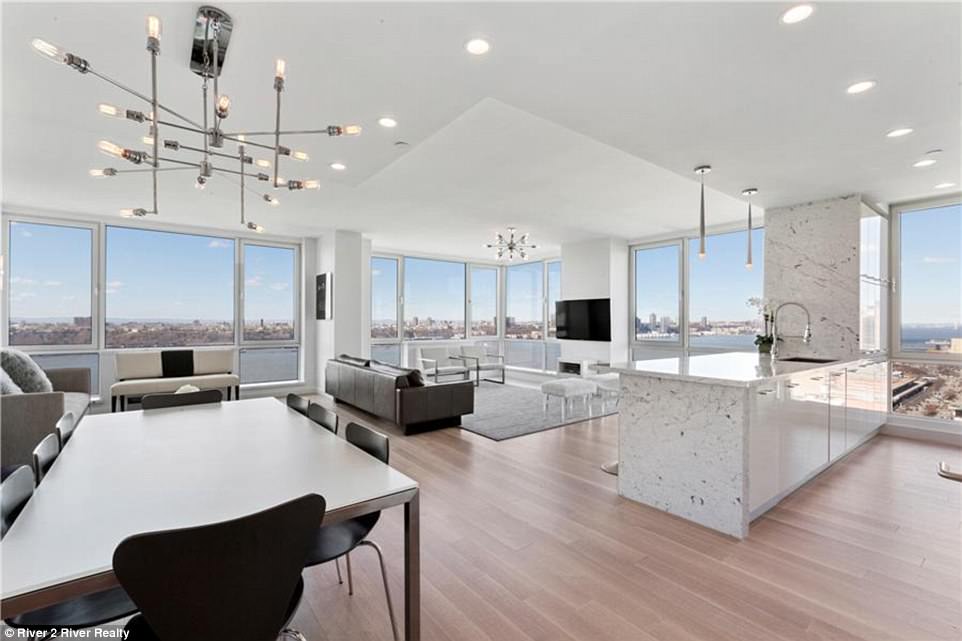 Open: The main living / dining / reception area has corner views of the Hudson, one of the biggest selling points for the 45th floor property The penthouse apartment that is for sale has 10 bedrooms, 13 bathrooms and takes up the entire 45th floor of the building in midtown Manhattan with incredible views over the city and the Hudson River towards New Jersey.

But that is offset by some of the other perks, which include courtside season tickets to the Brooklyn Nets for a year, which cost $3,000 each per game where you can rub shoulders with Jay Z and Beyoncé.

The new owner will also have a $15 million Hamptons mansion rental for a full summer, live-in butler services for one year as well as private chef.

The sale is being handled by Daniel Scott Neiditch and River 2 River Realty.

He tells Daily Mail Online: ‘It’s part of a lifestyle that we are offering to somebody who wants to come and live in New York.

‘This is the lifestyle that I have curated for them once they arrive here.

‘It’s the kind of things that a person buying the apartment can afford, but having them part of the deal makes it better.’

Neiditch says that he had shown the apartment to buyers from around the world, some of whom had never even been to New York before.

He says: ‘I currently own the cars and the yacht and will be signing them over to the owner once they complete the purchase.’

For those on a small budget, the apartment block has an ‘economy’ version of the same package available for those who buy properties costing between $20 million and $50 million

The new owners of those will get a free Lamborghini Gallardo Spyder sports car, worth $200,000. 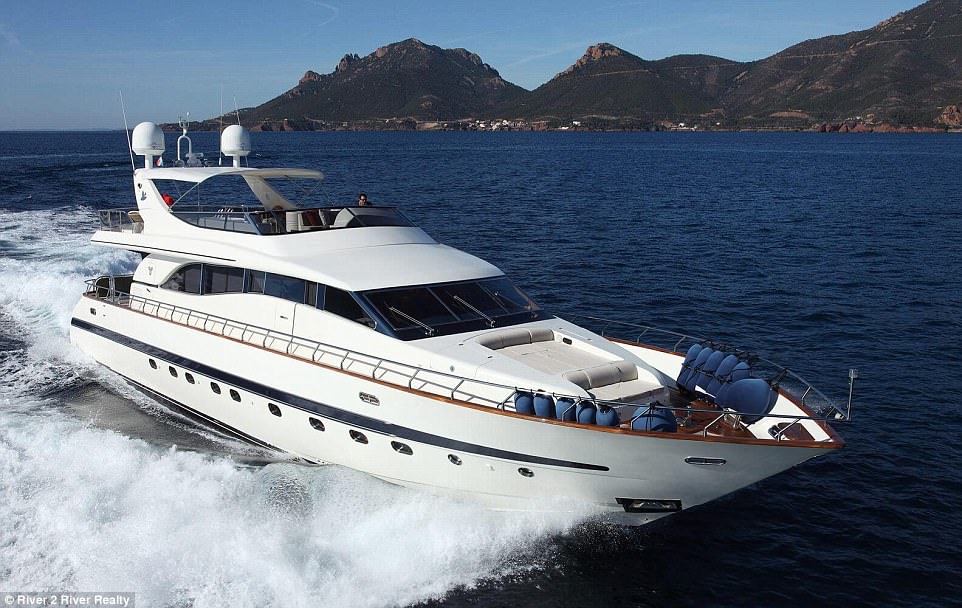 All this… and a yacht too: A $1 million vessel is included in the price, with docking fees paid for for five years 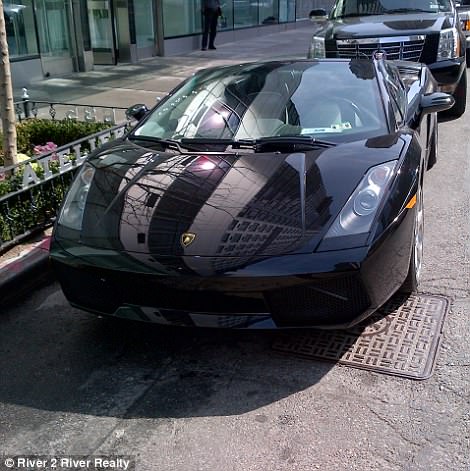 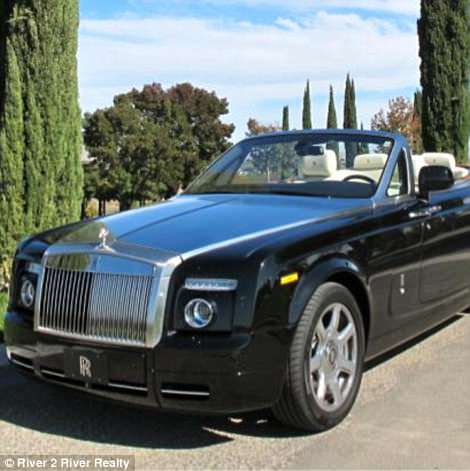 Runabouts: The apartment comes with three cars – a Lamborghini Gallardo Spyder, worth $200,000, and two Rolls Royce Phantoms, one hard-top and one soft-top (right) 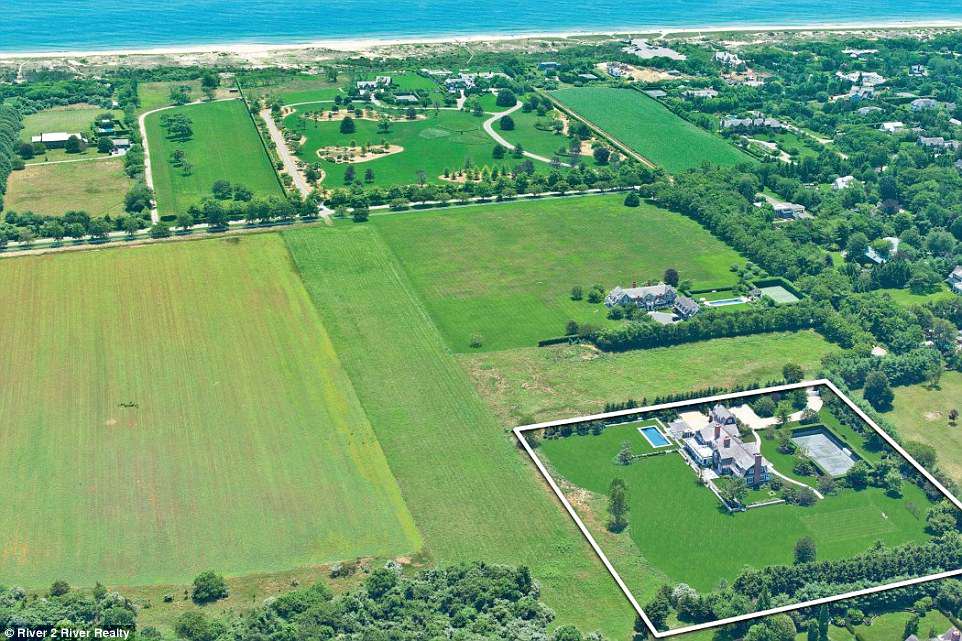 And relax: The price includes a month’s summer rental of a Hamptons mannsion (highlighted) complete with butler and chef 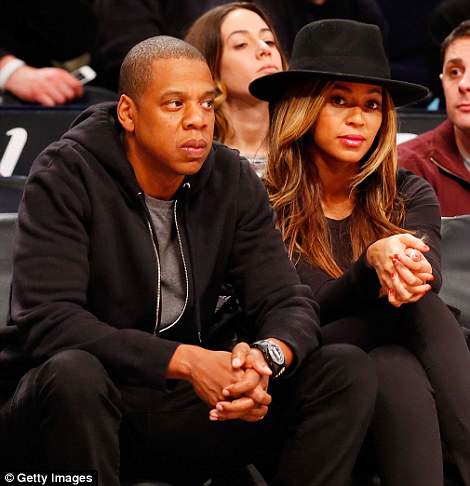 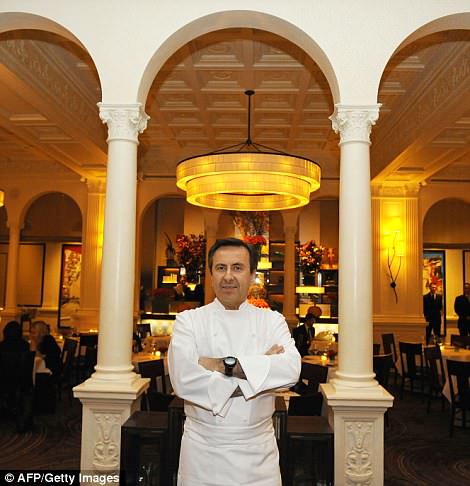 Perks: The apartment includes a courtside season ticket to the Brooklyn Nets, close to where Jay-Z and Beyoncé sit and two reservations a month at Daniel Boulud’s flagship Manhattan restaurant, Daniel 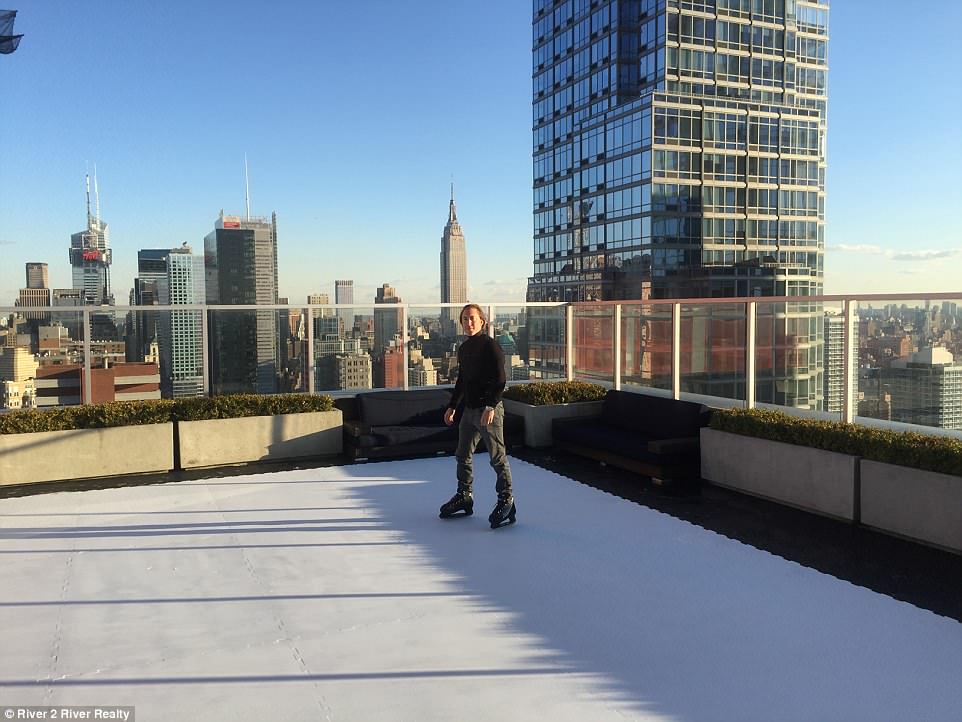 Outdoor fun: The 10-bedroom penthouse is in an apartment block which boasts an ice rink, basketball court and putting green 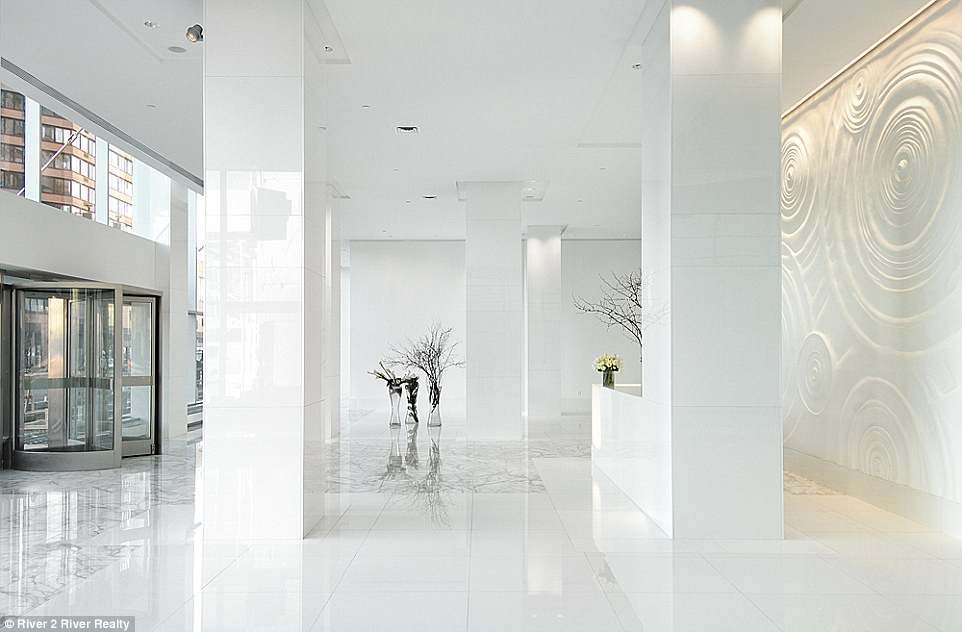 Personal service: Residents are unlikely to need to use the reception area as each apartment has its own elevator from the parking basement

They will be able to go for dinner at Daniel twice a month with a guest and will also get the courtside tickets to the Brooklyn Nets for the season.

In addition they will get a private butler for one year, a personal chef for a year and personal use of a separate Hamptons mansion for one month in summer.

The Atelier does not skimp on other amenities either and every winter installs and ice skating rink on the roof.

There is a 24-hour concierge, a rooftop lounge, free breakfast each day and a 12,000 square feet fitness center and pool. The Atelier comes with free wi-fi in the building, a basketball court, dry cleaning in the building and a private movie theater.

Those who need to have groceries delivered can put them in the cold storage area. There is also a putting green, a private shuttle bus for residents’ use, a children’s outdoor and indoor playground and weekly music classes.

Lindsay Lohan used to live at the Atelier, which was completed in 2007, and others who have checked out apartments there have been Orlando Bloom and Ed Harris.

The perks at the building appear to trump those of One Hyde Park in London, which is thought to be the most expensive apartment block in the world where the penthouse cost a staggering $237 million.

Security is tight as some residents are Russian oligarchs who have panic rooms, bulletproof glass and guards trained by the British special forces.

According to a report in Vanity Fair, all mail is X-rayed before being allowed into the building. Giant elevators go straight from the parking garage up to each resident’s apartment meaning they barely have to get out of their vehicles to go into their front door. 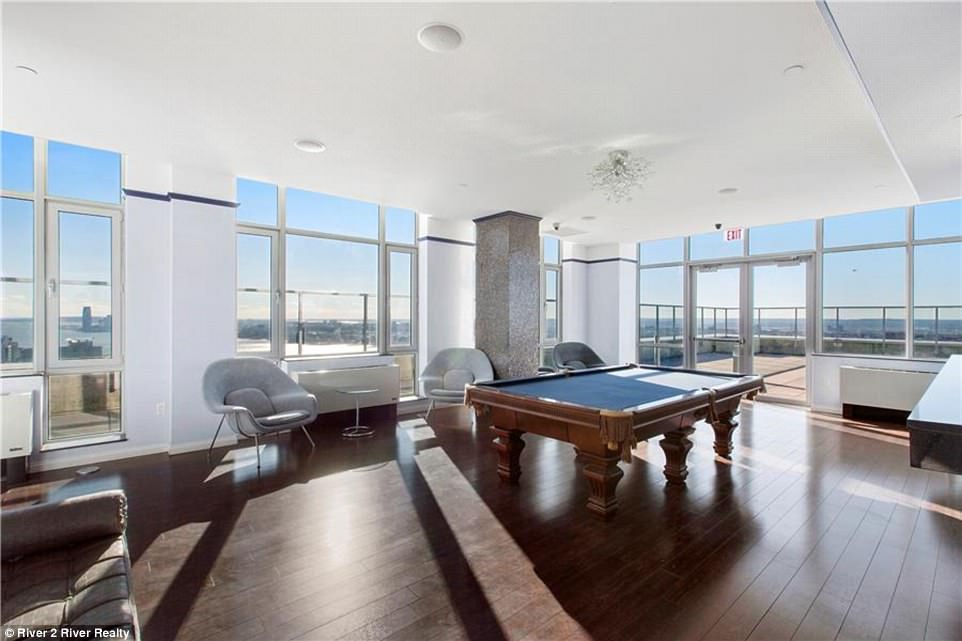 And relax: As well as its own recreation area, the apartment has access to terraces overlooking the Hudson and Manhattan 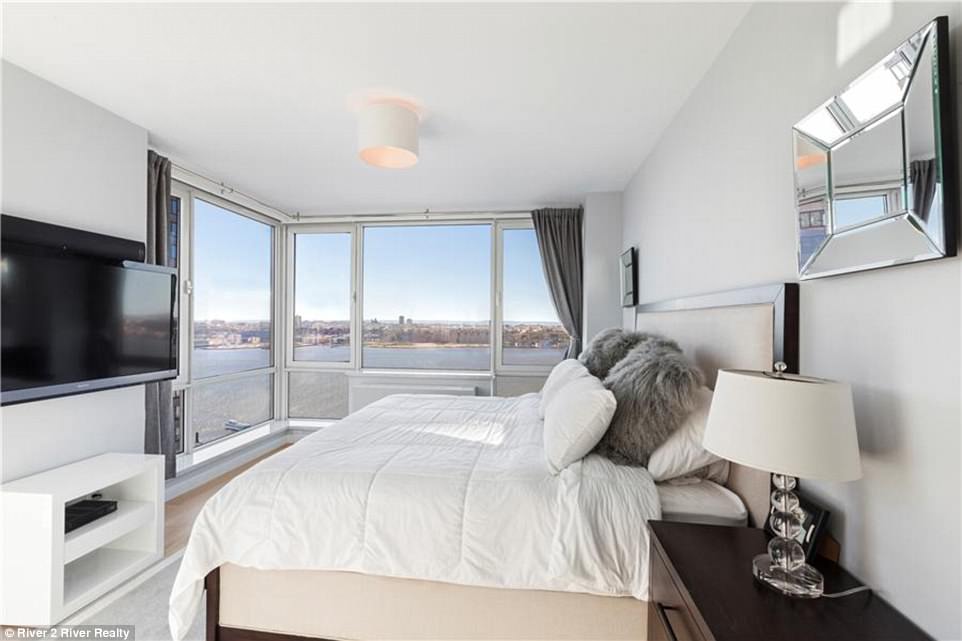 Room with a view: One of the ten bedrooms the most expensive condo boasts. It also has 13 bathrooms 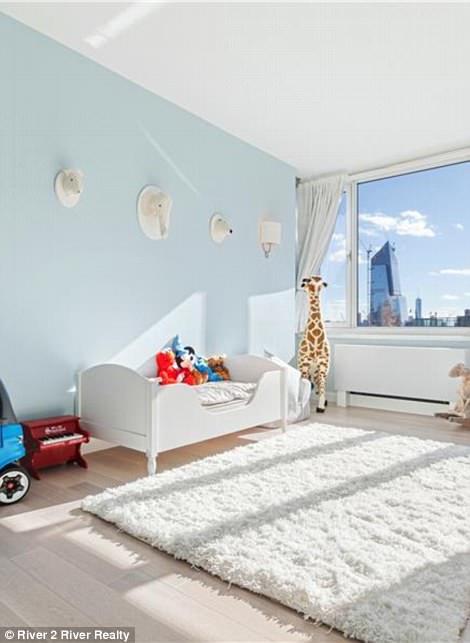 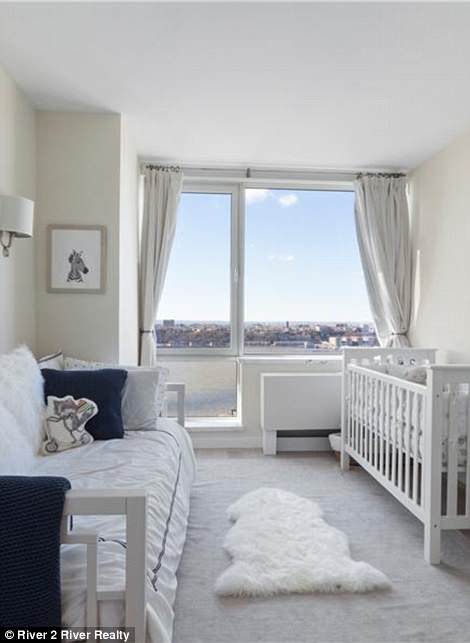 Cozy: The condo is designed for a family to be able to move in and live comfortably from day one, with facilities for children 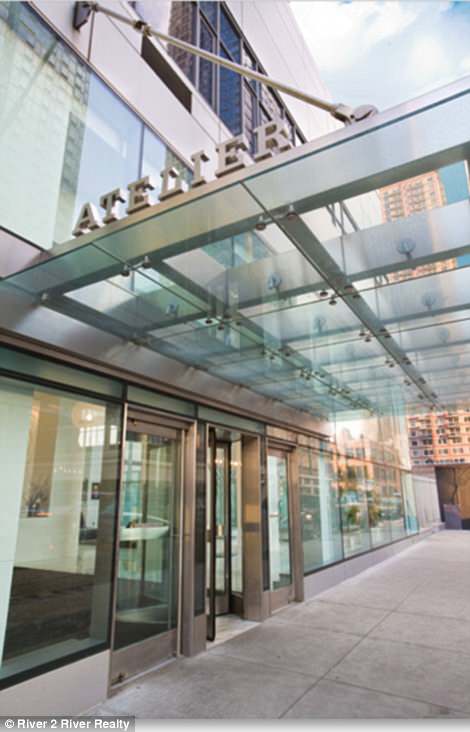 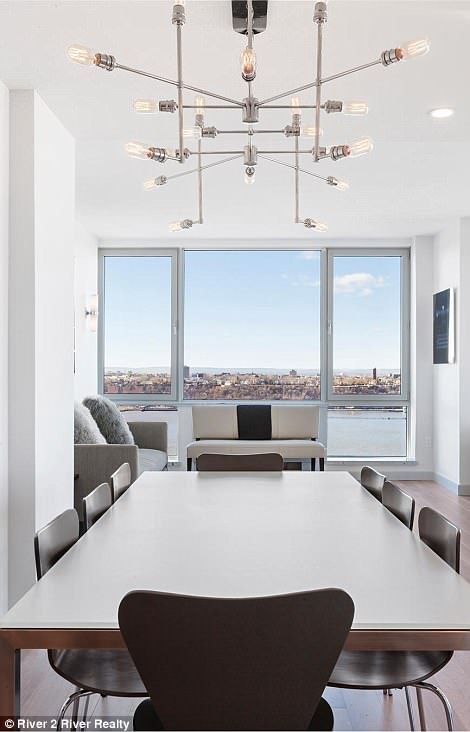 Exclusive: The entrance to the apartment building, while 45 floors up, the owner of the $85 million penthouse will have a view of the Hudson river and New Jersey