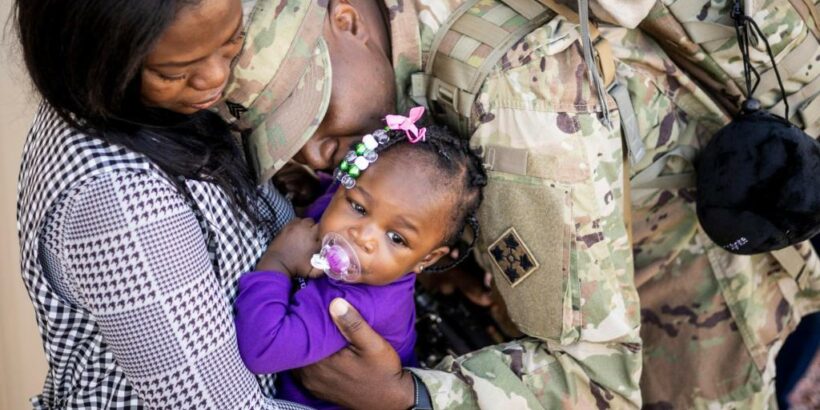 FORT CARSON, Colo. — A taut line of soldiers crossed the sprawling Army post’s parade ground in the afternoon, hoisting flags draped with a rainbow of streamers from past deployments: Afghanistan, Iraq, Vietnam, Korea, Germany, France, Civil War battles and even skirmishes with Plains tribes on horseback.

“Present colors!” a sergeant yelled. The soldiers turned and dipped the flags toward their commanding colonel, who stepped forward and carefully wrapped each one in camouflage sleeves.

At that very moment — 1:29 p.m. Mountain time on Aug. 30 — the last U.S. military plane took off from the Kabul airport in Afghanistan.

American flags across the country had been lowered to half-staff to honor the 13 U.S. troops killed there by a suicide bomber. And at the front gate of Fort Carson, women set out 13 pairs of boots and 13 cold Bud Lights as a memorial.

But the ceremony on the parade ground was not marking the end of America’s war in Afghanistan. The 4th Infantry Division’s 1st Stryker Brigade was wrapping its flags to mark the beginning of its latest deployment. It was going back to Iraq.

Although the mission may have dropped from public attention, the United States still has boots on the ground in the other nation it invaded in the wake of 9/11. About 2,500 U.S. troops are in Iraq now, the embers of what was once a scorching and divisive war, now carefully scattered to protect a few strategic bases. For the next nine months, roughly 2,000 soldiers from 1st Brigade will take over much of that duty.

The deployment is the latest in a long line for the unit, whose ranks are now made up largely of soldiers who were toddlers when the United States invaded. In their view, war in foreign lands is not a finite, momentous event but rather a continuing reality — a task that probably will always be there, in need of volunteers.

The brigade’s first deployment to Iraq in 2003 culminated in the capture of the country’s fugitive dictator, Saddam Hussein, whom soldiers pulled from a spider hole in a small village. The troops came home that time to a raucous welcome, with 70,000 people in attendance and tributes by Lynyrd Skynyrd and Jessica Simpson.

But initial victory in Iraq did not lead to peace. The brigade returned to Iraq 2006 and again in 2008. Scores of brigade soldiers were killed as the country crumbled. The fervor of the initial invasion faded even as the brigade kept deploying, including tours in Afghanistan and Kuwait.

As 1st Brigade’s platoons boarded military jets once again in 2021, there were no banners along the roadside, no bands playing. Only a few dozen family members and an excited orbit of children and dogs showed up for a subdued send-off.

But as the young troops crowded onto the planes, setting off from a nation wearied of war, many of their faces flickered with excitement. They walked across the flight line feeling proud that it was their time to stand watch. The fate of a nation, which the pullout from Afghanistan showed can hinge on just a few thousand troops, would now rest in part on them.

Here is a closer look at six of the soldiers deploying.

Steadman was a lieutenant fresh out of college when the World Trade Center was attacked in 2001, and he soon found himself leading a platoon of paratroopers in Afghanistan. He has seen little rest since.

He commanded a company in Iraq during the 2007 troop surge to quell growing unrest. Then he led a battalion back home. He did a stint in dress uniform at the White House, keeping always a few steps behind President Barack Obama, carrying a briefcase full of launch codes known as the nuclear football. Now he commands a brigade combat team.

Two decades of war have defined his life. So he was surprised a few weeks ago when his 10-year-old daughter asked him, “What is Afghanistan? Why are they fighting there?”

“It made me stop,” he said. “I realized there are so many young people still learning about the world.

“A lot of my soldiers are that way, too. They are young enough that they don’t know why we are there, why we went. Part of my job is to teach them.”

The brigade chaplain did not start out as a chaplain. He began as a grunt private who enlisted in 2002, when he and his wife had a baby on the way and Congress was voting to approve the use of force in Iraq. He deployed to Iraq while his first child was still in the hospital. Now he has four.

The intensity of his first deployment in 2003, he said, forced him to seek direction and community in his Christian faith. After seeing how faith had helped him and other soldiers at war, he knew he wanted to become a chaplain.

He has seen the Army change over the years, from a force focused on quick victory to one girded for long, grinding fights. During that time, a garden of social services has sprung up around the war fighters to give them a better chance at happy family lives, stable finances and healthy lifestyles that can sustain them.

“One thing is for sure: After all this time, the Army has learned how to go to war,” Mason said. “It’s learned how to support soldiers, how to build strength not just physically, but through spiritual practices and supportive relationships. We know that soldiers can’t deploy if they don’t have the support of loved ones at home.”

Quiet, confident, with a blond ponytail trailing out from her patrol cap, Albright lifted her rucksack and told the 20 soldiers in her intelligence platoon to line up to deploy.

In her rucksack was a book of meditations on how Christians can find delight in their duties and joy in purpose. “That’s how I was raised, and you feel an obligation to others,” she said. “I feel called to serve.”

The platoon she leads is mostly men. Only about 15% of the Army is female — a proportion that has barely budged since 2001, even though all combat jobs are now open to women. But the story is different among young officers: About one-third of all first lieutenants now are women, suggesting that the Army leadership in the future could look a lot more like Albright.

Being a woman in uniform “is not a big deal,” she said. “I’ve gotten nothing but support, people pushing me to succeed.”

His great-grandfather was in the Army. So was his grandfather. So was his father, who came home from Operation Desert Storm shortly before he was born. So Blomer never had many questions about what he would do for a living.

As 1st Brigade soldiers prepared to fly to Iraq, some stuffed their rucksacks with good-luck charms, extra pillows and blankets or books for college courses they are taking while deployed.

Not Blomer. He is not seeking comfort, distraction or an exit plan. He said he plans to make a career of the Army. He enlisted nine years ago and has already deployed once, to Egypt for the peacekeeping mission in Sinai.

The night before deploying to Iraq, he went out with Army buddies to celebrate with a big steak. He welcomed the idea of serving where there was a chance for action and a little danger.

Before she was an officer in a medical logistics team, Tran was an enlisted military police officer, then a drill sergeant. She has seen the Army from all sides and has already served in Iraq and Afghanistan.

She is the daughter of Vietnamese refugees who fled the fall of Saigon in 1975. Her father fought on the side of the Americans. Her mother escaped by boat. They never really talked about that war at home, and she never really asked. Her parents were not very happy when she enlisted.

Why is her brigade being sent to Iraq now, 10 years after U.S. combat operations there formally ended? That is just how it goes, she said, pointing out that U.S. soldiers are still deploying to South Korea and Germany, where the fighting stopped generations ago. Regardless of the place or mission, her work remains the same.

Pabon walked into a recruiting station Sept. 11, 2020, to sign his enlistment papers, oblivious to the significance of the date. He finished training only a few weeks before he learned that he would be deploying to Iraq.

Pabon wears the patch of the 4th Infantry Division on his left sleeve. Like the majority of the brigade, his right sleeve is bare. That spot is reserved for a combat patch for troops who have deployed to a conflict zone. He will get his when he returns to Fort Carson.

“We are excited,” he said as he waited to board an airplane at a military air terminal near Fort Carson. “A lot of the guys who didn’t get a chance to deploy wish they had.”

Asked if he was troubled about deploying to a country where many Americans felt that U.S. troops should never have been sent in the first place, he shook his head. He pointed to a postersize photo hanging on the wall of the terminal, showing a soldier kneeling down to shake the hand of smiling Iraqi boy.

“You see in that photo?” he said. “The boy has a book bag. That’s why I don’t mind going. I want to make sure those kids keep having those opportunities.”This article originally appeared in The New York Times.