The owner of a picture-postcard B&B in the Cotswolds has become a cult celebrity in Japan – because her hotel was turned into a hit animated TV series.

Caron Cooper, 60, has even hosted the Japanese royal family at her cosy English hotel and been invited to share tea and scones with them in Tokyo.

Caron’s serendipitous celebrity began after a chance meeting with a couple at a market stall in 1989. 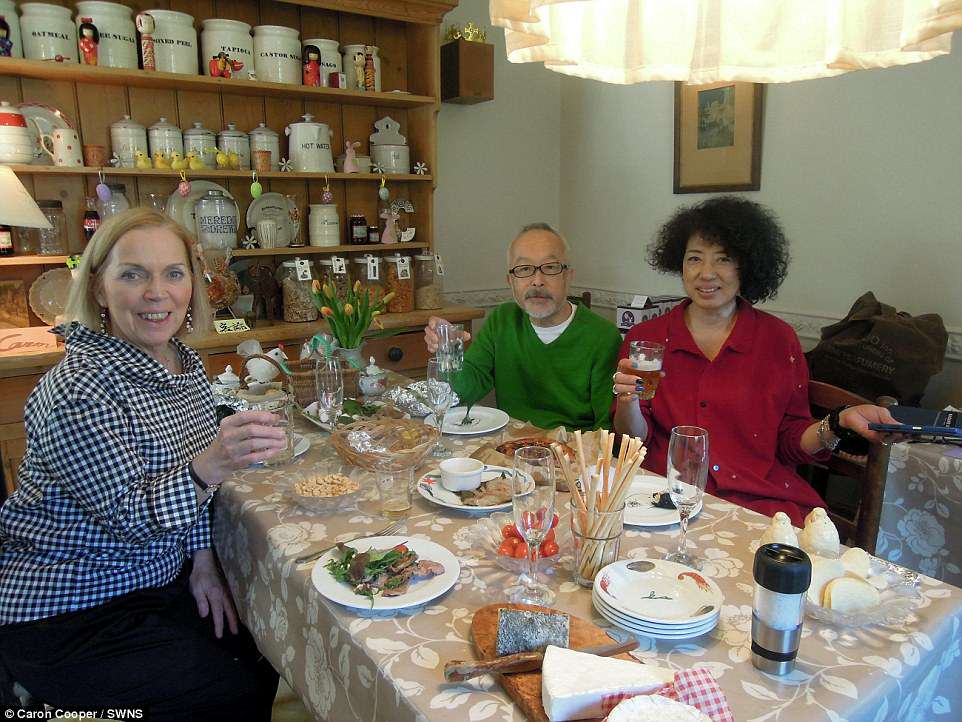 Shozo and Yasuko Mitani, mentioned that they were opening a British-themed B&B in Japan, so Caron invited them to visit her farmhouse.

They loved it so much they modelled large parts of their Japanese B&B on her home, and as it grew in popularity she began to receive an increasing number of Japanese visitors.

Her business then began featuring in Japanese magazines and on TV, and was the star of a major campaign to attract Japanese tourists to the UK. 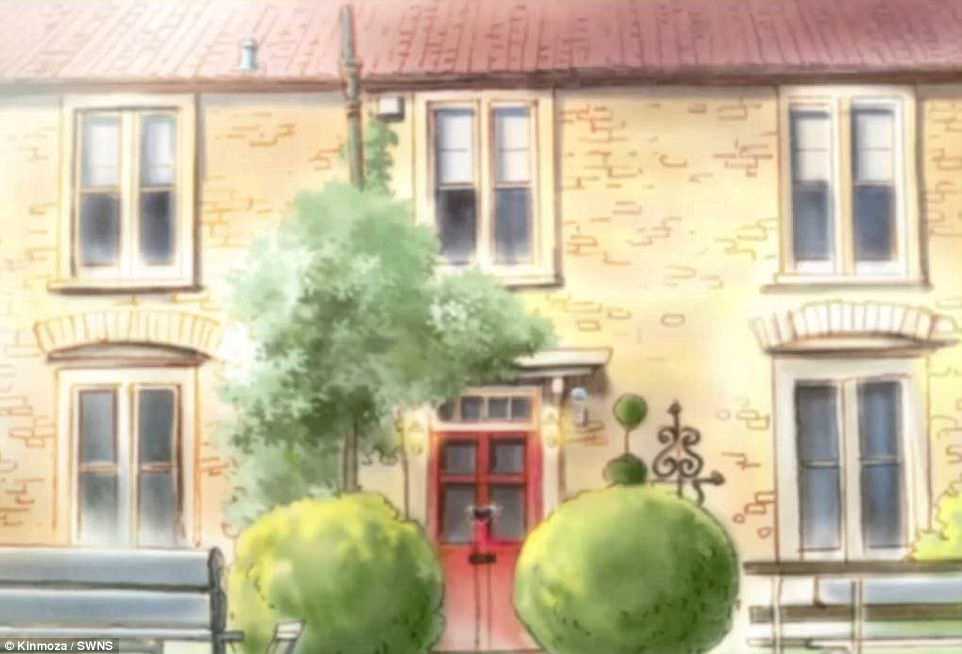 The anime version of the Fosse Farmhouse B&B in Castle Combe, Wiltshire 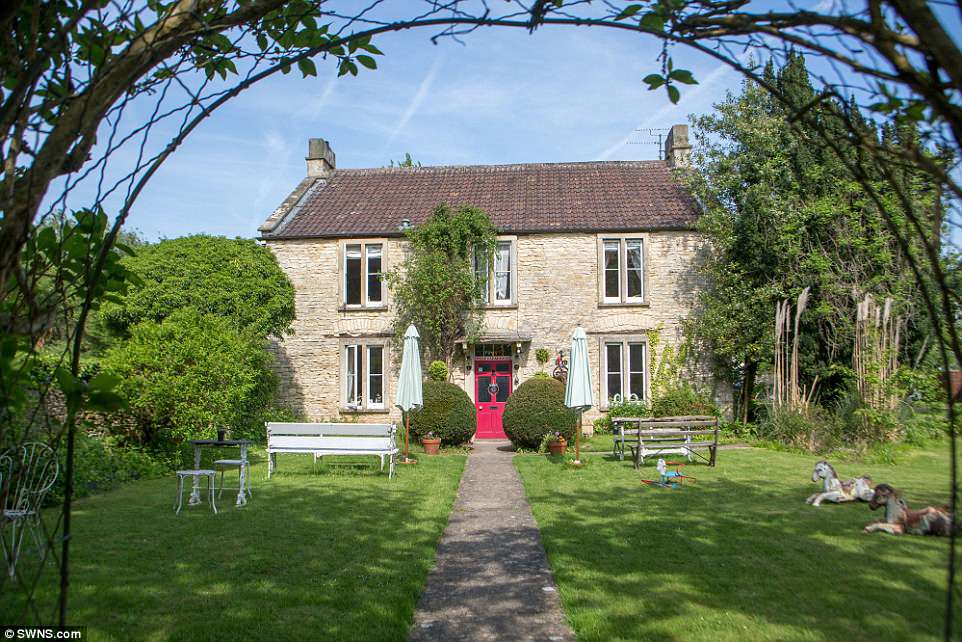 The real Fosse Farmhouse B&B, which is the subject of a series of popular anime comics and cartoons in Japan

Ms Cooper was then invited by the British Embassy in Japan to make tea and scones for the Japanese Royal Family at the Imperial Palace in Tokyo.

And in 1994, she returned the favour by hosting the Royal Family at Fosse Farmhouse in Castle Combe, Wiltshire for three nights.

Now she has become a well-known celebrity after a Japanese animation series ‘Kinmoza’ – which has its own comics, TV show and even film – was based on her home.

And Fosse Farmhouse, which has just two bedrooms, has a constant stream of Japanese fans of Kinmoza coming to visit the inspiration behind the series.

Caron, who has a Japanese fan base of 5.5million people, said: ‘This is the last thing I ever dreamt would happen to me – I just own a little B&B in the countryside.

‘My friends and British guests who stay here all look at me incredulously, like I’m living in a completely different world.

‘But I’m used to it now, and I’m loving it. I really enjoy the culture over there, it’s so lovely and they’re always so polite.’ 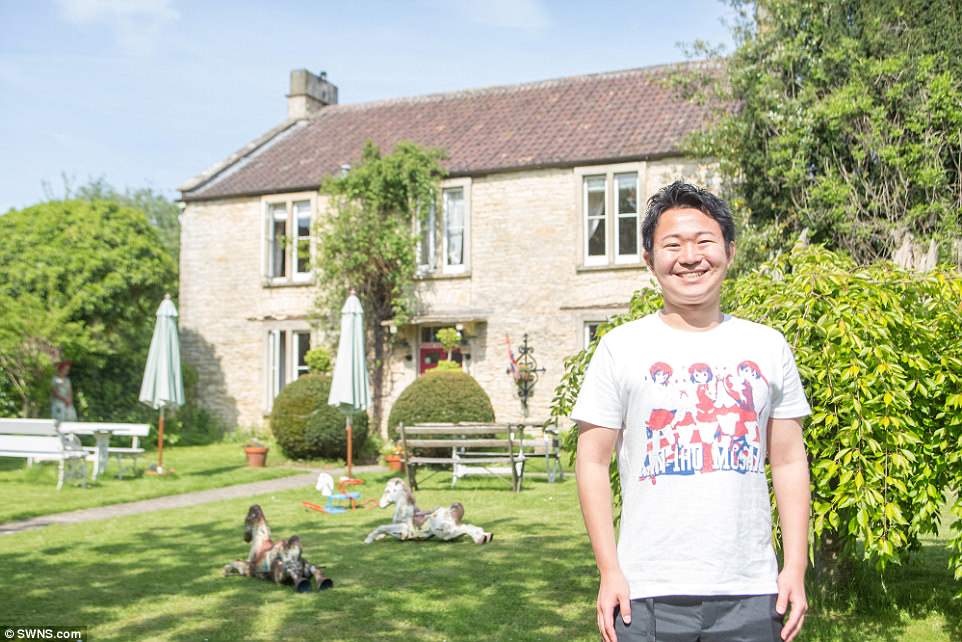 Yosuke Sekiguchi, 25 a Japanese tourist who is staying at Fosse Farmhouse a B&B

Caron bought and moved into Fosse Farmhouse, in the heart of the Cotswolds Area of Natural Beauty, in 1986 at the age of just 27.

She said: ‘I didn’t plan at first to open a B&B here, but with the cost of renovations I decided to give it a go.’

The hotelier, whose home is full of Victorian antiques, used to travel from Wiltshire to London to sell her antiques in Portobello Road.

And she would display photographs of Fosse Farmhouse on her market stall – which is where she met the Mitanis in 1989. 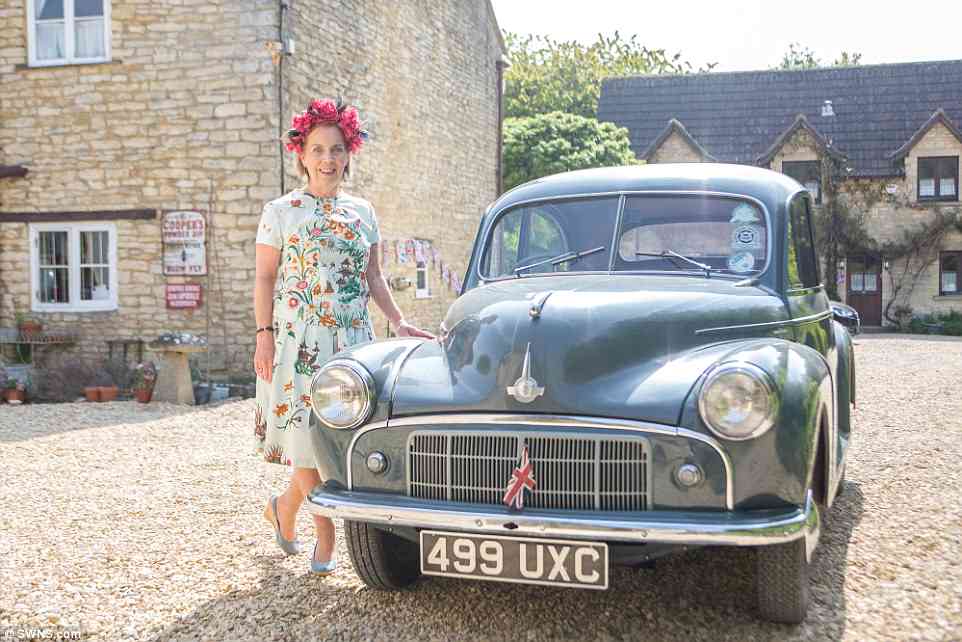 Caron Cooper, poses in front of the farmhouse in Wiltshire

‘They were browsing lots of the antiques at my stall, and they mentioned to me that they were building their own British B&B in Japan,’ said Caron.

‘At first my reaction was “Why?” But they told me that the Japanese love British things.

‘So I invited them to come for tea at my B&B the next afternoon. I’m very spontaneous like that.’

She added: ‘When they got here I could see them on the driveway laughing and taking photos.

‘There’s a long line of trees lining the driveway on the way up to the house – and they said it was like falling down a tunnel into Alice In Wonderland.’ 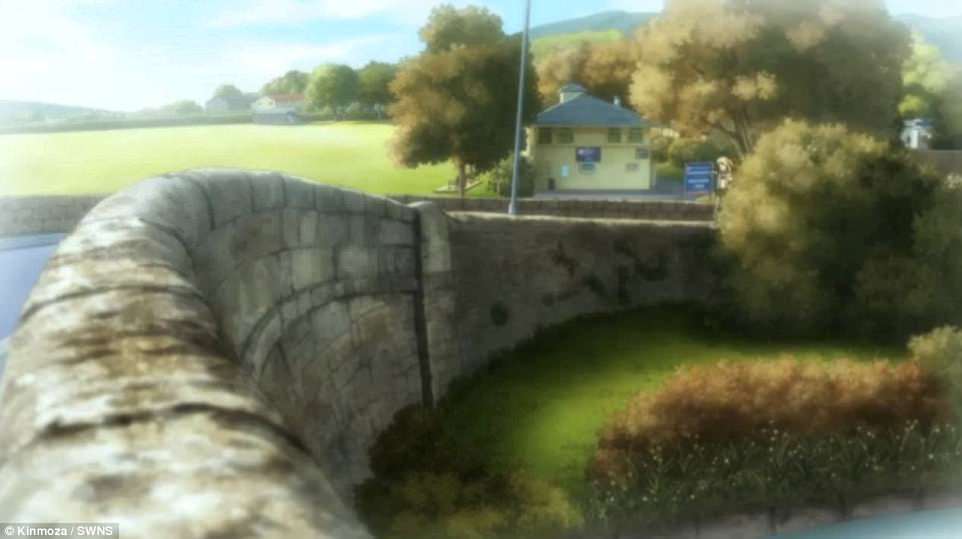 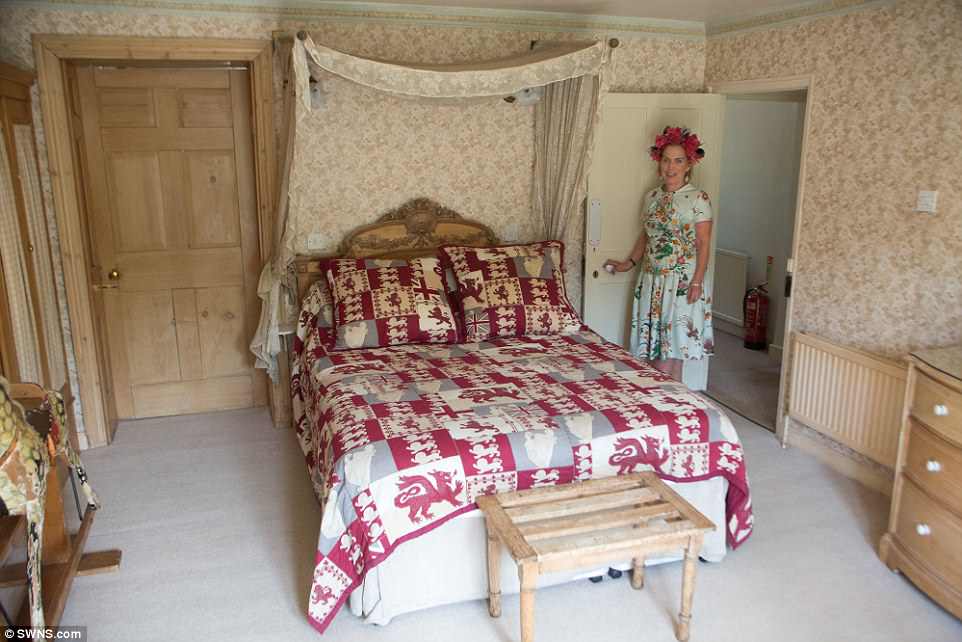 Shortly afterwards, Shozo and Yasuko returned home to Hakuba in the Japanese Alps, and opened up their English-themed B&B, Tenkisu.

They decorated their reception area with photos of Fosse Farmhouse – and it wasn’t long before Caron had Japanese tourists booking visits.

In 1990, Caron and Fosse Farmhouse were the subject of a six-page feature in glossy Japanese women’s magazine Lee, which at the time had a readership of 300,000.

In 1992, Fosse Farmhouse won an award for Best Tourist Accommodation, as chosen by Japanese visitors as part of the ‘Britain Welcomes Japan’ campaign.

Caron was then invited by the British Embassy in Japan to make tea and scones for the Japanese Royal Family at the Imperial Palace in Tokyo. 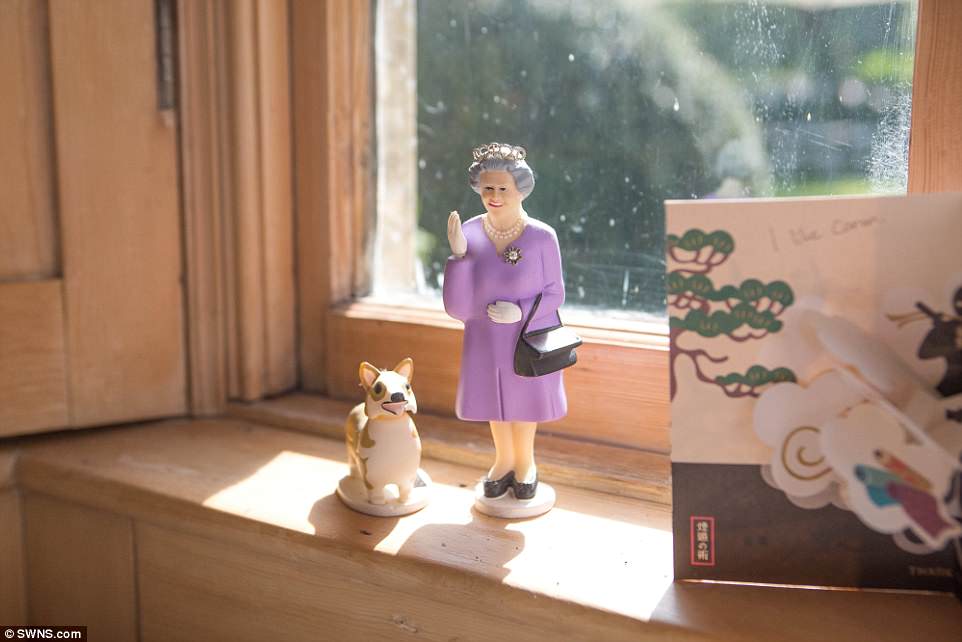 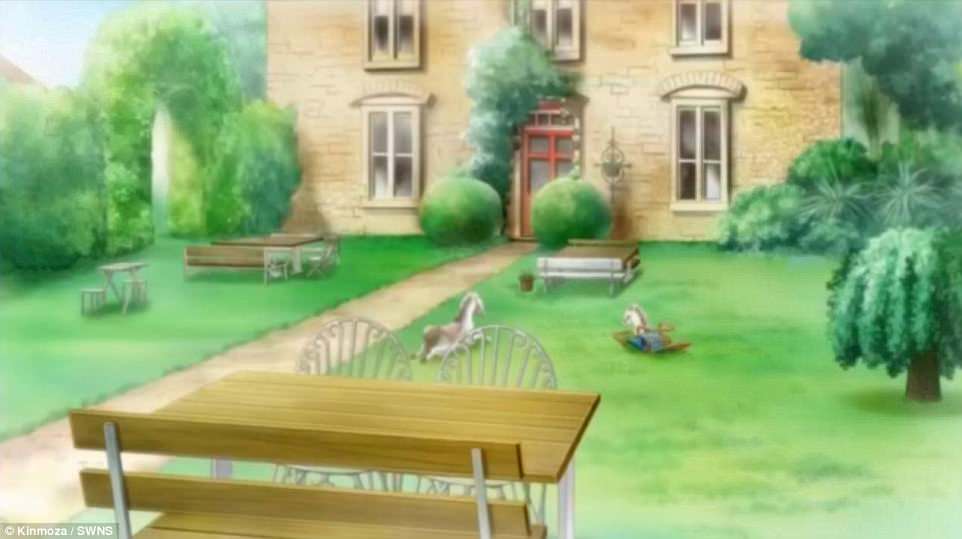 An anime shot of the farmhouse. The series is filmed in the UK and produced in Japan

And in 1994, she returned the favour by hosting the Royal Family – their Imperial Royal Highnesses’s Prince Takahito Mikasa and Princess Mikasa – at Fosse Farmhouse for three nights.

‘I took them sightseeing around Castle Combe and the Cotswolds, and we had dinner at Fosse every night,’ said Caron.

More recently, the Kinmoza comic series was developed in 2012 and the TV show, which has two series so far, in 2014.

And Caron has seen a huge increase in the number of Japanese guests visiting Fosse Farmhouse.

‘They treat it like a tour of a film set,’ she said. 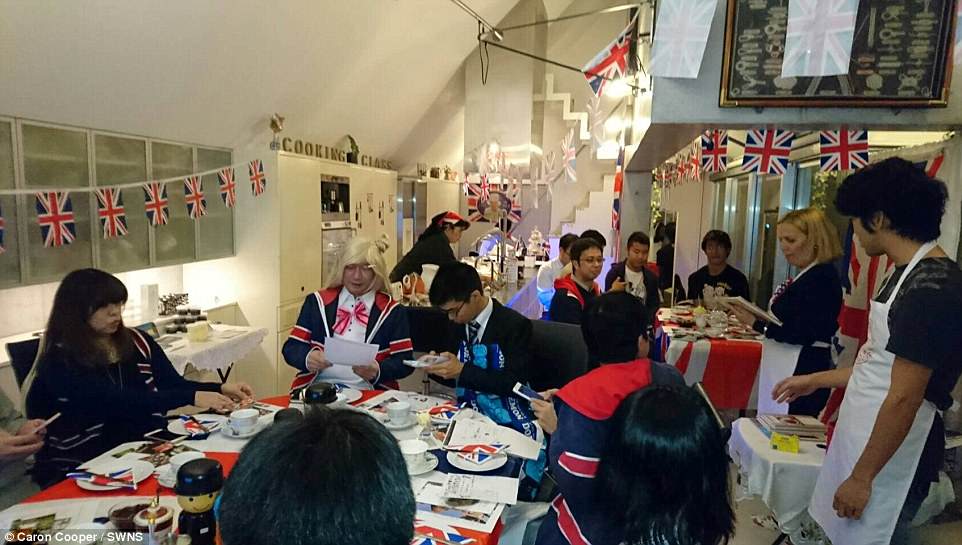 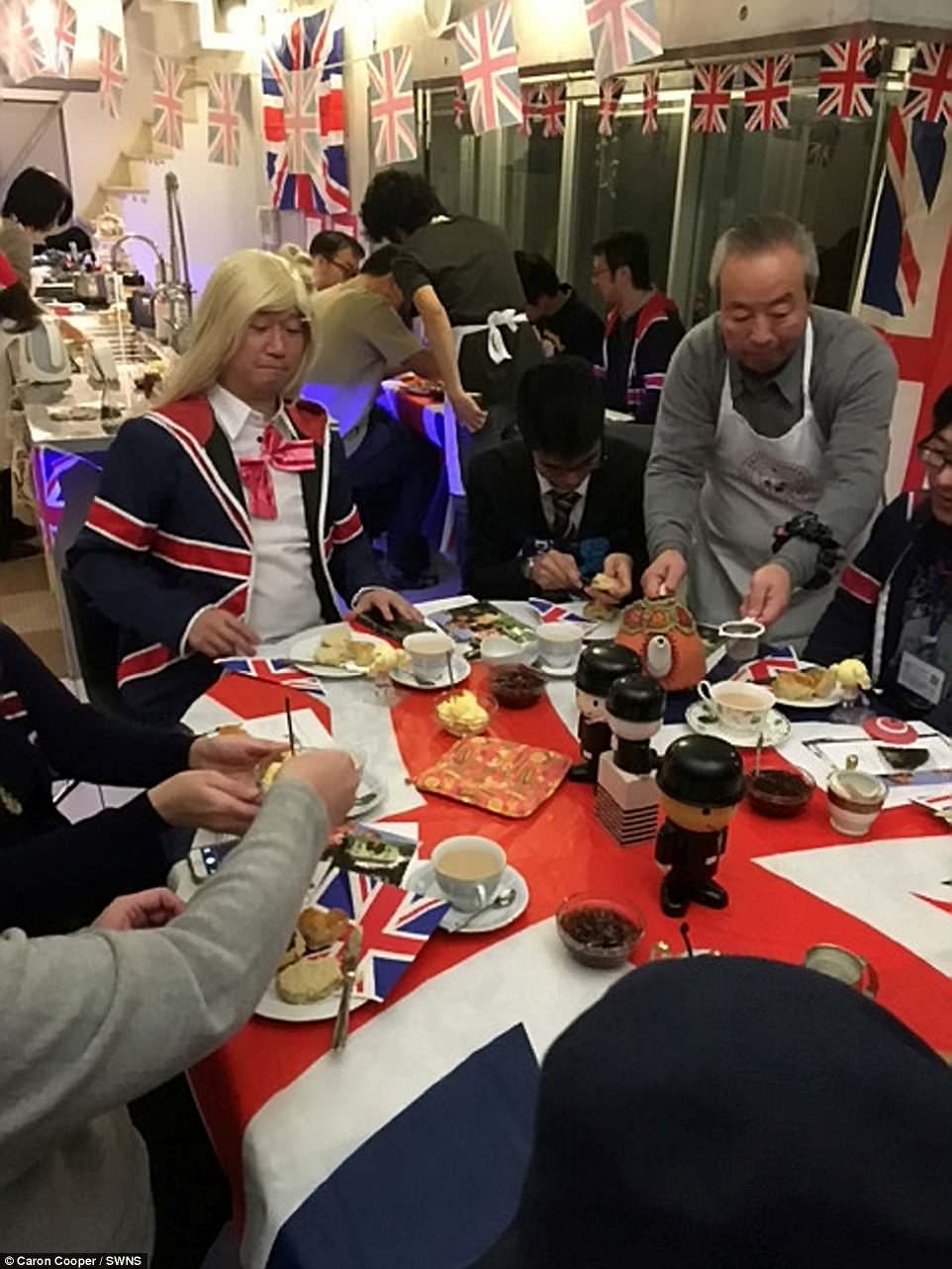 ‘In the animation, the main character is Alice, who lives here at Fosse Farmhouse with her mother – who is based on me – and bakes scones. Alice’s best friend is Shinobu.

‘When she comes to visit Alice she thinks, being Japanese, you have to take your shoes off being you go into a house, as they do in Japan.

‘Alice tells her no, you don’t have to do that in England, please come in. So Shinobu hesitates at the doorstep, squeezes her eyes shut, and jumps with both feet into the house.

‘Now, all the fans that visit here want to do the same thing.

‘And they want to go sightseeing in very specific places, like Cirencester and Kemble train station, because that’s where Alice takes Shinobu in the show.’ 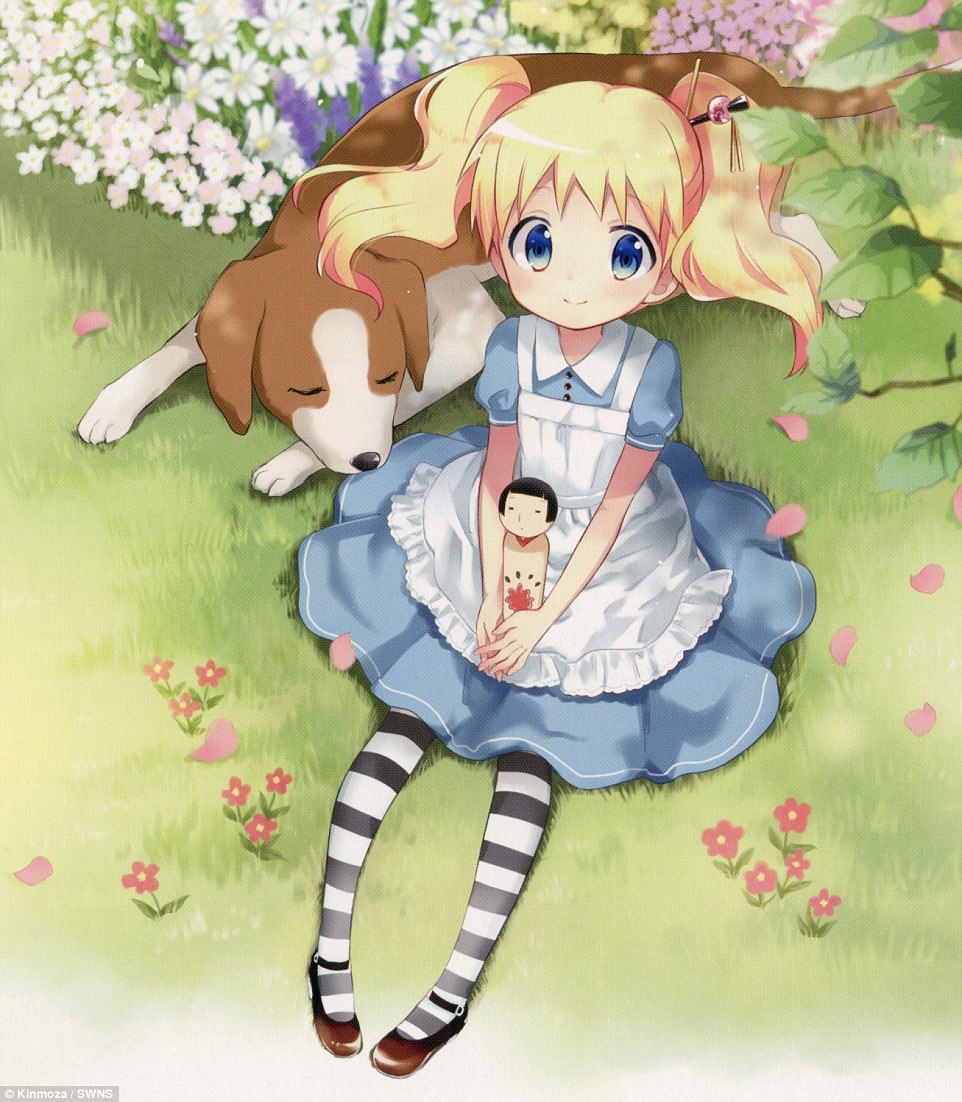 Alice Cartelet, the main character in the series, lives in the farmhouse with her mother 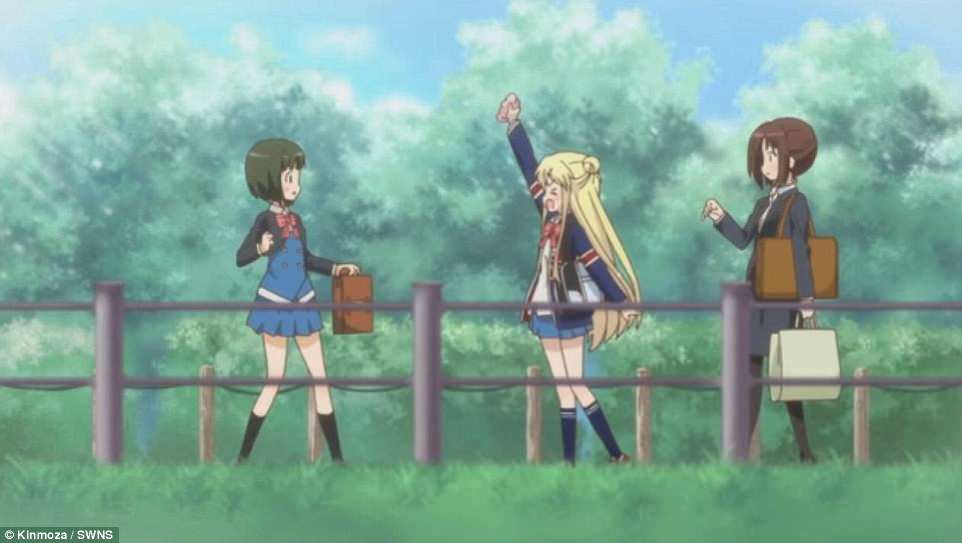 Caron does not have any children of her own – but says that Alice from the show is like her child, now.

And she added: ‘Everything is exactly the same here as it is in the show, so they all look like they’ve stepped into a dream. It blurs the line between reality and fantasy.

‘The show has five and a half million viewers in Japan. It’s actually all filmed here, and then the footage is taken back to Japan and turned into anime in their traditional style.

‘I would say every week during the summer months I have three or four Japanese guests come here, and they all bring me the books and DVDs. 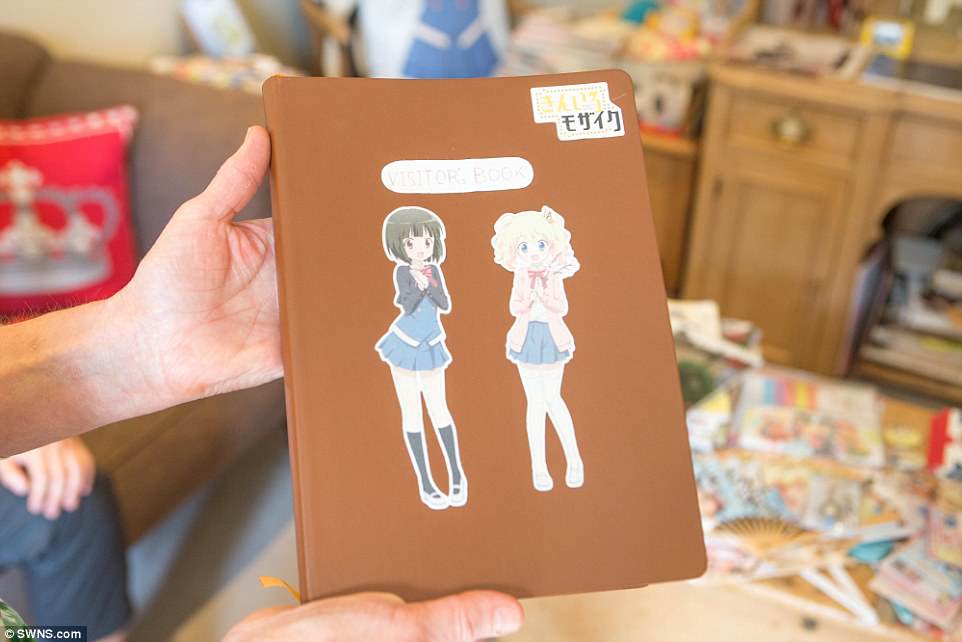 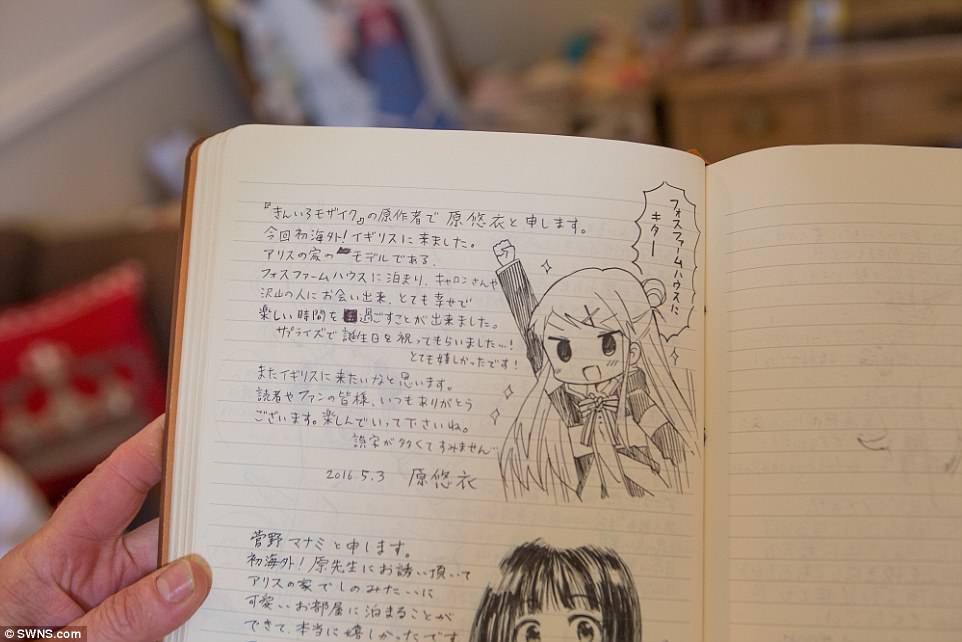 ‘They’ve even been translated into English now and the show also has a huge fan following in America.’

Kinmoza was even made into a feature-length anime movie called Pretty Days in 2016, where Caron walked the red carpet along with all the voice actresses.

Caron has remained firm friends with Shozo and Yasuko Mitani, and they still visit each other’s B&Bs every year.

‘I never know what’s going to happen next.’ 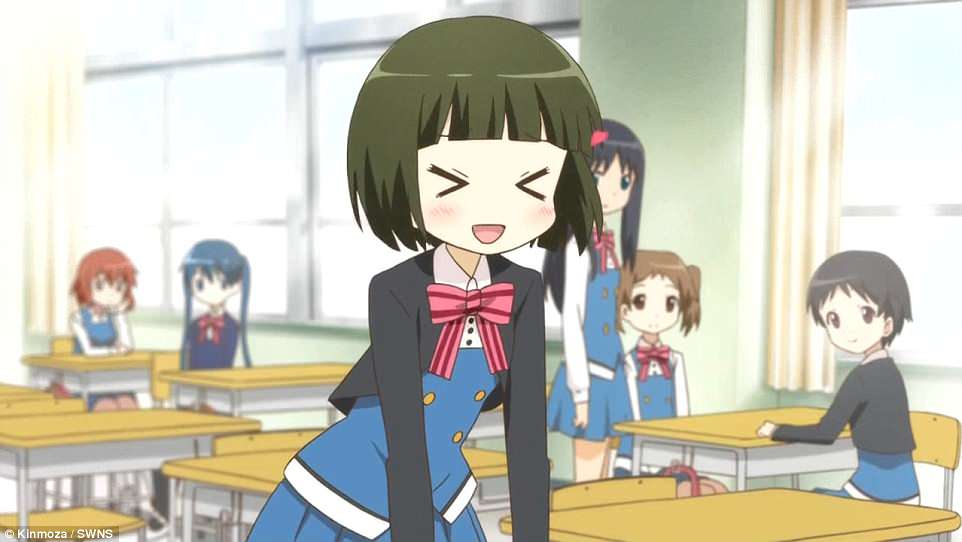 Shinobu Oomiya, one of the characters from the anime Kinmoza