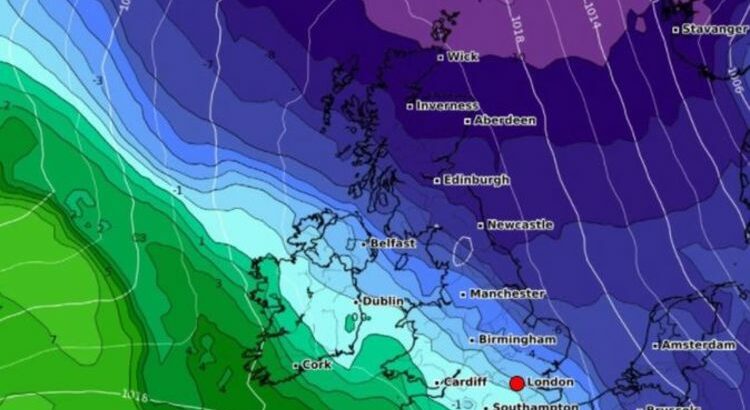 According to long-range forecasts, temperatures are expected to plummet in the final few weeks of January. As well as ice-cold spells, there is also a chance of snow in parts of Northern Scotland on January 18. The BBC has warned a Polar vortex is expected to hit in the latter part of January, which could cause a period of cold weather over the UK.

They said for the period between January 17-30: “Should the high become stationed elsewhere, say over Scandinavia or over central Europe, cooler, drier conditions are likely.”

However, at this stage it is unclear whether it will bring a definite cold spell.

They continued: “The latest information for the Polar vortex shows it should remain strong, with no signs yet of a big breakdown or split that would be strongly favourable for a colder period of weather over the country.”

In further graphs from Netweather, temperatures could hit a low of -7C on January 18.

The low will be located in the Highlands of Scotland, while the majority of Scotland will range between -1C to -5C, in the early part of the morning.

In the north of England, the mercury will range between -1C to -3C due to the cold front of weather.

In the Midlands, the southeast and London, temperatures will range between 1C to -3C.

Due to these cold temperatures, snow is expected in the Highlands, with WXCharts predicting levels approaching up to 6cm.

In eastern parts of Scotland, 5cm per hour of rain is expected due to the Polar vortex.

Newcastle and parts of the northwest will see rainfall approaching 1mm per hour on January 18.

Ahead of this period of cold weather, the BBC predicts a more mild weather pattern across the UK.

Its long-range forecast concludes: “High pressure should be favoured over Southern and south-east Europe while low pressure is favoured over Scandinavia and north-west Europe.

“This would maintain a wet pattern over the UK with enhanced winds most likely over Northern Ireland and Scotland. Temperatures should be near average to slightly higher.

“Heading through the last week of the forecast, detail remains uncertain.

“We favour high pressure over the central North Atlantic extending to Iberia with low pressure over north-west Europe and Scandinavia.

“This would maintain a seasonal to slightly mild pattern for all regions.”

Commenting on the period between January 5-9, the BBC reports: “Wednesday starts fair in all areas but clouds and rain will move over Northern Ireland and Scotland from the morning as it becomes breezy over all parts.

“The rain moves over all regions into Thursday to clear all parts by the afternoon.

“Temperatures will be around 1.0C above average over the week but Tuesday and Wednesday should be noticeably cooler with a northerly wind.

“It appears that the unsettled pattern will continue into next weekend but with the possibility that Sunday may be the better day.

“Temperatures next weekend should be around 1-2C above average for the time of year.”