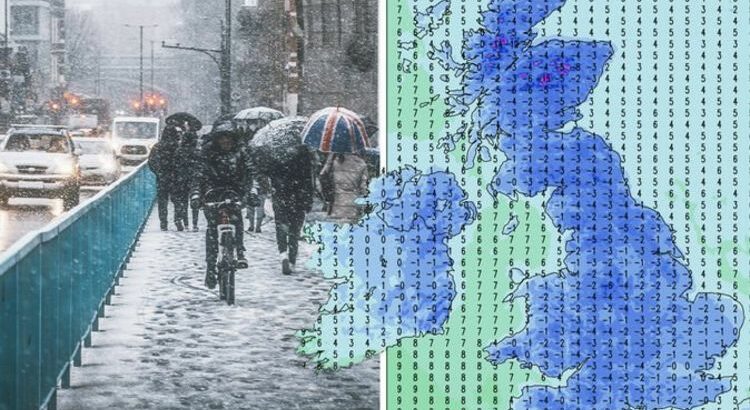 The Met Office has issued two yellow weather warnings for snow across parts of Scotland and Northern England from 10am until 4pm on Thursday. A separate yellow snow and ice warnings has also been put out for a huge swathe of the same areas from 8pm on Thursday until 10am on Friday, blanketing large areas of Scotland and Northern England. The latest forecast from the Met Office has warned tonight (Wednesday) could be the coldest night of the winter so far, with temperatures possibly plunging to as low as -12C, and the mercury falling to -5C in other rural spots of the UK.

But the latest map from The Weather Outlook shows temperatures plunging to a “bone-chilling” -15C in the Scottish glens on Thursday morning, and well below freezing throughout the whole of the UK.

The Weather Outlook’s Brian Gaze warned “cold Arctic air” will become trapped under an area of high-pressure building from the west on Wednesday evening.

This will see a widespread frost forming that will see temperatures plunging, with outbreaks of snow following on Thursday, which could give “significant accumulations in places”.

Mr Gaze told Express.co.uk: “An area of high-pressure building in from the west will bring calm conditions and clear skies to much of the UK tonight.

“Cold Arctic air will be trapped underneath it so a widespread frost develops and some computer models are suggesting that temperatures in the Scottish glens could reach a bone-chilling -15C by the morning.

“Through tomorrow weather fronts push eastwards across the UK. They bring outbreaks of rain to southern counties but in the north they will be preceded by a period of snow which could give significant accumulations in places, especially over high ground.

“It remains cold on Friday with wintry showers in places.”

But this will be preceded by what the Met Office has warned could be a contender for the coldest night of winter 2020/21 so far, threatening a temperature low of 10.2C seen on December 22.

Thursday will begin with a band of frost with a mix of rain, sleet, strong winds and snow on the Highlands throughout the UK that could cause chaos for motorists, particularly in areas of northern Britain.

Up to 15cm could fall on high grounds of England and Scotland, with some slushy accumulations also causing havoc for Britons.

Met Office Senior Operational Meteorologist Annie Shuttleworth told Express.co.uk: “We are expecting tonight to be a contender for the coldest night of winter 21/22 so far, we saw -10.2C on the 22nd of December and temperatures across glens of NE Scotland could reach -12C this evening.

“Other rural spots of the UK will see temperatures around -5C.

“It will be a largely dry night with just a few showers along eastern coasts, so that means clear skies and hence the very cold night across the UK.”

She added: “A frosty start tomorrow but turning wetter and windier from the west, a band of rain, sleet and hill snow and strong winds will push across the UK bringing poor visibility and difficult travelling conditions for a couple of hours to northern areas of Britain.

“Snow accumulations will be largely restricted to high ground of northern England and Scotland (5cm above 200m and 10-15cm above 400-500m) though some slushy accumulations (1-2cm) could last a couple of hours at 100m.

“Further south on Thursday, breezy, feeling cold with outbreaks of rain only. Chilly on Thursday night but not as cold as tonight, mins of -5C in N Scotland.

“Snow showers will move to affect W Scotland, W Northern Ireland and NW England on Thursday night and Friday morning, which could lead to icy pavements and roads and some travel disruption until Friday lunchtime.”

AccuWeather Senior Forecaster John Gresiak warned freezing air from Iceland has been “pouring south across the UK” over the past couple of days, which has resulted in heavy snow throughout large parts of Scotland.

He has forecast temperatures to fall a few degrees below the -7C already gripping parts of the UK tonight (Wednesday), while a few inches of snow could fall in parts of northern England, Wales and Ireland on Thursday.

Mr Gresiak told Express.co.uk: “Temperatures are already as low as -7C in some areas and can fall a few more degrees during Wednesday night.

“The current snow activity will be ending this evening as a ridge of high pressure moves across the UK. Even London will be quite cold tonight with temperatures dropping to near or a little below freezing.

“Tomorrow into tomorrow night, a front moving across the UK from west to east will bring areas of rain and snow.

“While areas in the south and most low elevations will warm quickly so that they have rain, the air will stay cold enough for snow in parts of northern England, Ireland and Wales.

“These areas can receive up to a few inches of snow tomorrow and tomorrow night. Meanwhile, parts of Scotland, especially the northwest Highlands, will have heavier snow, with a foot or more expected in some places.”