The Met Office said the chances of seeing temperatures rise past 104F (40C) are now 10 times higher than if man had not affected the climate. This would pose severe health problems for millions across the country and could be unbearable for some. The UK record temperature is 101.6F set in Cambridge in July last year. But this could soon be the norm for a British summer, researchers claimed.

The Met Office said the chances of extreme high temperatures in parts of the UK could “increase significantly” by the end of the century.

Currently, the chances of recording 104F are “extremely low”. But it could occur every three to four years by 2100 if the world continues to pump out high levels of greenhouse gases, it was said.

If the world honours the 2015 Paris climate agreement to limit temperatures to 2C above pre-industrial levels the chances would be “considerably lower”.

The major climate study said the South Pole has warmed at more than three times the global rate since 1989. It argued this was probably intensified by increases in greenhouse gases. Lead author Dr Nikolaos Christidis said: “We found the likelihood of extremely hot days in the UK has been increasing and will continue to do so during the course of the century.

“Climate change has already influenced the likelihood of temperature extremes in the UK. “The chances of seeing 104F days in the UK could be as much as 10 times more likely in the current climate than under a natural climate unaffected by humans. The likelihood of exceeding 104F in the UK in a given year has also been rapidly increasing and, without curbing greenhouse gas emissions, such extremes could be taking place every few years by 2100.”

Dr Mark McCarthy, co-author and head of the Met Office’s National Climate Information Centre, said: “This research shows human-caused climate change has set us on course to see temperature extremes in the UK that would be highly unlikely under a natural climate.” 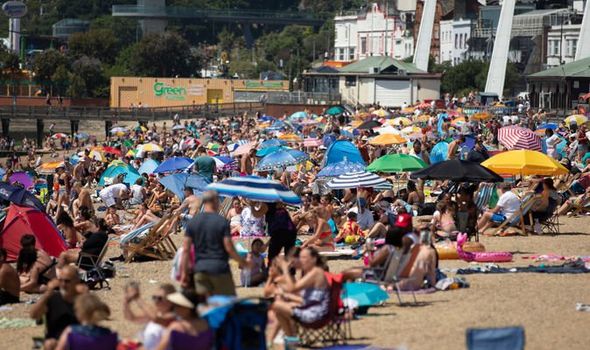 He said “urgent action to reduce emissions” was required immediately. Last week the Committee on Climate Change – which advises the UK Government – said it has a “once in a lifetime chance” to turn the coronavirus crisis into “a defining moment” in the fight against climate change.

It called for a green economic recovery to accelerate the transition to a cleaner economy. The study’s findings were published in the journal Nature Climate Change.

Every week, world leaders are warned of the climate catastrophe they are failing to face.

Here in the UK we have had the wettest February and the sunniest spring on record. And May was the sunniest month ever.

Records keep tumbling, which is precisely what is expected from man-made climate change. The weather will become more and more extreme.

The Met Office warning yesterday that England could regularly face sweltering temperatures without cuts to greenhouse gas emissions does not sound wide of the mark.

The trick is to stop adding to greenhouse gases, which include water vapour, methane and nitrous oxide.

But climate change is known as global warming for a reason. A global effort is needed now.