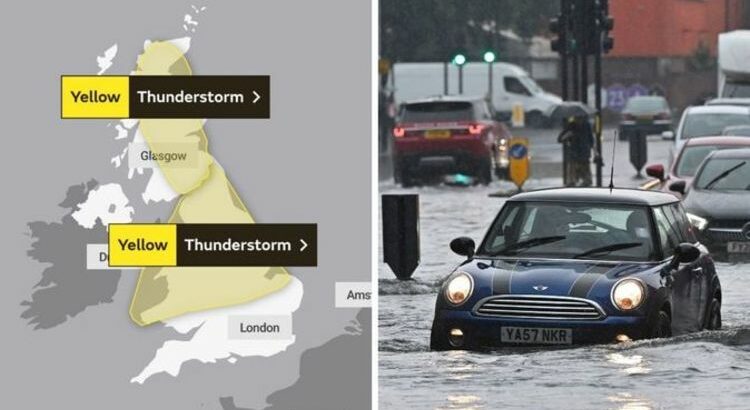 A blistering heatwave has given way to dramatic floods across the UK as heavy downpours plague parts of the UK. The rain is showing no signs of stopping over the coming days, with stubborn thunderstorm warnings remaining active in the UK until Thursday.

Images have shown dramatic floods across the capital on Sunday as drains burst and water collected in the streets following a months’ worth of rain falling in a matter of hours.

Whipps Cross hospital in East London was forced to evacuate patients and cancel operations yesterday after the NHS declared a “major incident”.

Prime Minister Boris Johnson tweeted on Monday afternoon: “My thoughts are with everyone affected by the flooding in London and the South East.

“A huge thank you to the emergency services and volunteers helping families and businesses through this difficult time.”

Mayor of London Sadiq Khan said the emergency services and local councils had received hundreds of calls about the violent weather on Sunday.

“The serious flash flooding in London over the last two weekends will have caused major concern and anxiety for many Londoners and it shows that the dangers of climate change are now moving closer to home,” he said.

“Despite having limited powers in the area, it remains a key priority for myself and London’s council leaders that more is done to urgently tackle flooding and the other impacts of climate change.

“This is why I have brought together all of the key partners to see what more can be done, including the water companies who have to address the localised issues with infrastructure that may exacerbate the impact of flooding.”

However, London is set to escape the heavy rain due to fall elsewhere across the UK, with the Met Office issuing multiple weather warnings for the upcoming week.

Thunderstorms are predicted to lash most of Wales, the midlands and the north of England in one weather warning.

The warning reads: “These will last well into the night across north Wales and north-west England in particular where they could be prolonged in places.

“Lightning and hail may pose additional hazards in a few locations.”

Scotland is also in for a lashing today and tomorrow, with thunderstorms and heavy rain predicted for almost all of the mainland.

The warning reads: “Heavy showers and thunderstorms are expected to develop across Scotland during Tuesday afternoon, lasting well into the evening in some places.

“Where these showers occur, 20 to 40mm of rain is possible in a couple of hours with the potential for around 60mm in 3 to 6 hours in some locations.

“This may cause localised flooding, especially if such totals occur over urban areas. Lightning and hail will pose additional hazards.”

Will there be floods again this week?

The Flooding Service for England and Wales currently only has three flood alerts out for Eastern Yar, Somerset Coast at Porlock Weir, and St Johns Ryde.

Scotland currently has 15 flood alerts out across much of the east coast and central Scotland.

Express.co.uk will update this page as flood alerts and warnings are made.