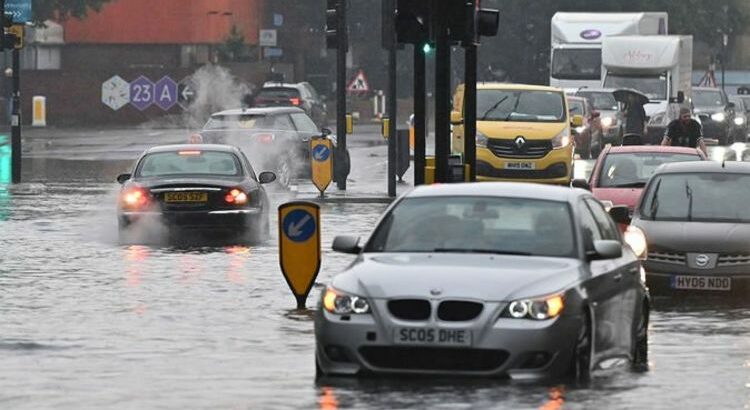 The weather system is continuously changing due to the warming climate, bringing extreme heat and torrential rain to the UK. The average temperatures are steadily increasing meaning that 30C heat, if not more, is to be expected for the rest of the summer and foreseeable future. However, higher temperatures result in more extreme weather events taking place in the UK.

The country has seen a number of devastating floods this year already, and according to Julian Faraway, Professor of Statistics at Bath University and an expert in air pollution and flooding, it will get much worse this Christmas.

Mr Faraway told Express.co.uk: “If we look at river flooding, it is actually much more of a problem in winter. More so than in the summer.

“Most of the problems in the UK occur in the winter, so it gives you some perspective when you look at the events that have happened in July and August.”

The expert added: “We can expect even higher probability of flooding in the winter.”

The professor also compared the recent floods that took place in Germany to the ones that occur in the UK.

He said: “Looking at Germany, they were different types of flooding, because they’re the ones that are more local in nature because of the geography of the area, and they are also on a wider scale.

“So I think the big flash floods, those tend to occur in the summer whereas more sustained rainfall and bigger areas flooding that’s going to be in the winter.”

Floods are also extremely difficult to predict with a very short notice given to the public.

“Sometimes they’re really hard to predict. We get quite a short warning of these events.”

He continued: “They can be quite unexpected in terms of predicting when and where they will occur, but I’m pretty sure that they are going to occur sooner rather than later around the country.”

Mr Faraway also claimed that the idea of “white Christmas” is long gone.

With the temperatures steadily increasing, bringing in more rain, there is a small chance for snow.

Mr Faraway said: “Looking towards winter and the idea of a ‘white Christmas’ is becoming less and less likely.

“Of course it’s still possible but the chances are going down. The reason behind that is the warming climate and so there is less snow than there used to be.“

The expert said that the reason for the increased flooding is climate change.

According to Mr Faraway, the weather systems in the north Atlantic are changing bringing violent storms into the UK.

He said: “It’s to do with high pressure and low-pressure systems in the north Atlantic.

“There are intense low pressures that bring big storms and that’s what going to generate our wind and lots of rainfall.

“And that’s why we’re seeing more and more of those extreme events.”