High pressure gained momentum as it hit western parts of the UK overnight and will continue to sweep over throughout Saturday and Sunday. Nick Finnis at Net Weather said: “Most places will be dry with sunny spells on Saturday, though cloud will build through the morning, thick enough to bring a few showers across western Scotland, N. Ireland and NW England, cloud tending to break to sunnier conditions from the west by evening.

“Although high pressure will build in from the west, flow still coming round the high off the Atlantic, so temperatures will hardly be soaring, but it will feel pleasant in the sunshine nonetheless, highs of 17-19C in the north, 18-21C in the south.

He added temperatures will soar to at least 24C in the south on Sunday.

Mr Finnis said: “Sunday looking a better day for sunshine and warmth across most of England and Wales as high pressure builds in, with some lengthy spells of sunshine across central and southern areas.

“A bright or sunny morning across Scotland, before thickening cloud and rain arrives across the west of Scotland and N. Ireland in the afternoon, eastern Scotland probably staying dry and perhaps bright until evening. 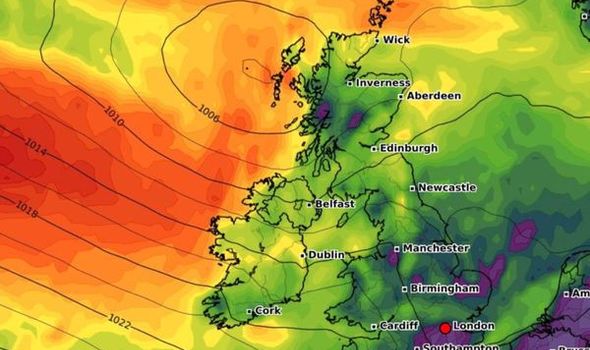 Mr Finnis added the high pressure from the Atlantic will return once again next week.

He said: “Monday should be dry and bright or sunny across southern and eastern England, though cloud tending to increase from the west through the day.

“Wales, northern England, N. Ireland and Scotland seeing thickening cloud and outbreaks of rain spreading in from the west at times. 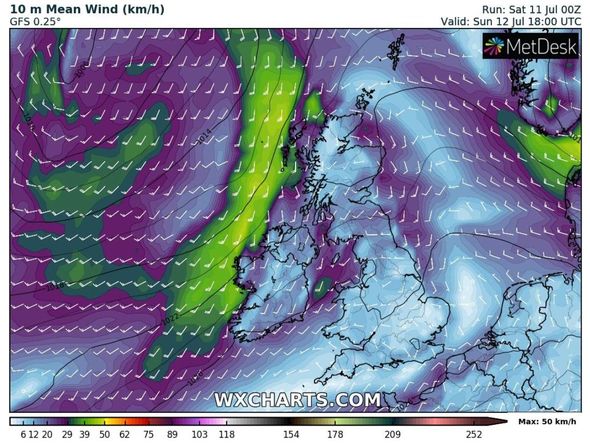 “Quite warm in the southeast, perhaps 25C in any sunshine, elsewhere temperatures reaching 18-20C.”

Meawhile, the Met Office has predicted sweltering highs of 26C on Sunday.

“Cloud will build through today, but most places will remain dry and feel warm, helped by the light winds. Maximum temperature 22C. 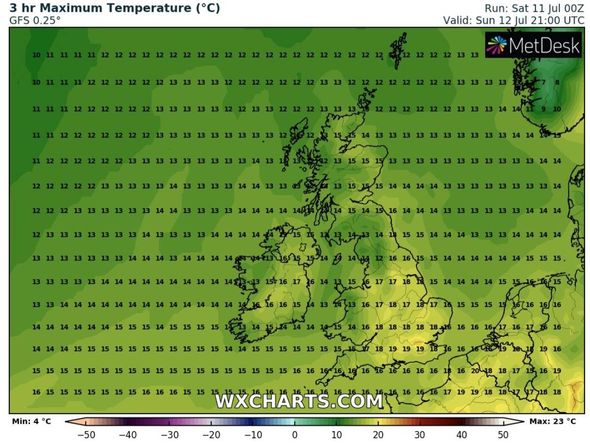 “Tonight: Sunny this evening, and generally clear overnight. As the wind becomes very light or calm, and it becomes locally chilly, so patchy mist or fog may form. Minimum temperature 6C.

“Chilly start in places on Sunday, with any mist or fog soon clearing.

“Then dry with sunny periods, and feeling warm away from the cooling sea-breezes which develop. 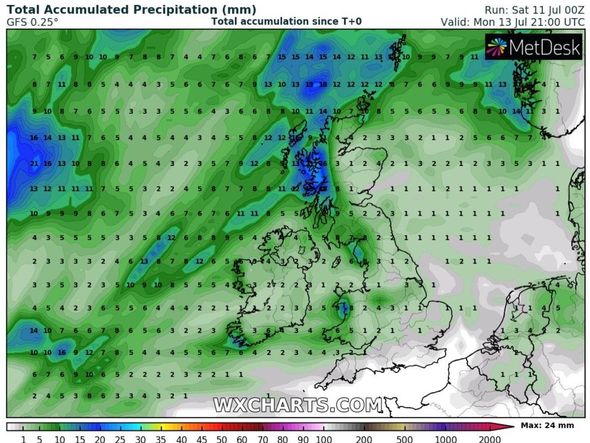 The Met Office added there will be rain on Wednesday, but also sunny spells.

It said: “Monday chilly start, but then warm sunny spells before cloud increases through the day.

“Thereafter probably mainly dry, with temperatures closer to normal, but perhaps some early rain for Wednesday.”