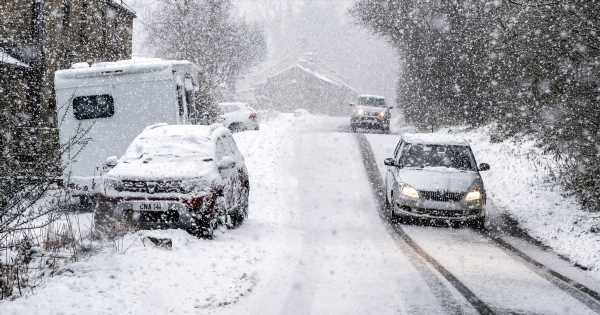 The Met Office is warning of snow and torrential rain set to hit Britain in the coming days.

According to the UK's national weather service, an active jet stream is to bring a change to the weather with a series of low-pressure systems across the country.

The first of these low-pressure systems will cross to northern regions including Scotland bringing extraordinarily wet and windy weather hitting winds of up 77km/h.

A weather warning for rain in parts of Wales has been issued for Sunday and there could be more warnings on Wednesday.

A threat of showers will take hold over England, with some regions experiencing up to 4.5mm falling an hour. Brits up and down the country will have to brace the strong winds and very wet conditions.

Met Office Chief Meteorologist, Steve Ramsdale, said: "A new area of low-pressure, this time moving across England and Wales, arrives on Saturday night then slowly clears to the east on Sunday.

"This brings wet and windy weather to the country, particularly Wales, and we have issued a Yellow National Severe Weather Warning for rain for this." The Met Office has also warned that temperatures will begin to plunge as an Artic freeze coming in from the North East and it will gradually drop white stuff onto the country.

The latest weather maps show the the Artic blast could last for up to 12 days.

According to forecaster WX Charts, almost all the country from south to north should expect flurries of snow. WX Charts have highlighted the most afflicted region will be Scotland, where dumpings will lead to 10 or more inches settling in the Highlands on the Sunday.

The North East and North West will flurries bringing one or two centimeters, with snow also expected to fall but not settle in the South West and East Anglia

Weather experts said there is risk of icy and slushy surfaces at lower levels, which could cause dangerous travel conditions.